Is it possible to use a power inverter to run a sump pump?

If the power should go off, I want my sump pump switched to a power inverter combination. Is this possible?

If you want to run an appliance like a sump pump from an inverter, you need to make sure that you get one that's large enough.

The pump will be rated according to how many amps it draws (probably in the range of 5 or 6, based on a quick internet check). However, when an AC motor starts it uses a much higher current, maybe 2x as much. Ideally you would measure this surge current amount and duration so that you know what you're working with, but you could assume double the current for several seconds. So if you have a 5 amp pump, lets assume its surge current is 10 amps.

Inverters are usually rated by watts, but you can compute the amps by dividing by 120V. Inverters usually have a continuous wattage rating and a higher surge rating. Unfortunately, cheaper inverters will only surge for a fraction of a second before cutting out, so you can't just assume that the surge rating of the inverter will be able to supply the surge current of the pump.

The only way to really be safe is to get an inverter whose continuous rating is greater than or equal to the surge current draw of the pump. So in this case yo'd be looking at a 1200 watt inverter (which may have a higher surge rating). [Some of the nicer brands of inverters will publish how long the surge rating can be used for, e.g. 0.5 seconds, 2 seconds, 60 seconds. If you know that your inverter has a long surge time, you may be able to get a smaller inverter].

If this is just for a one-off emergency usage you may be able to run the inverter from a car battery, but you should at least have a sense of what you're getting into. To compute the battery runtime you need to know the amp draw on the battery. Note that the amps coming out of the battery will be at least 10x higher than the pump's amps, due to the much lower voltage. A 5 amp / 120V pump is using 600 watts, which is 50 amps at 12V. Assuming an inverter efficiency of 80% you're pulling around 62 amps from the battery. The capacity of car batteries varies based on model, but a good sized battery probably has 50 amp-hours of capacity (that's 50 amps for one hour, or 25 amps for 2 hours, or 10 amps for 5 hours). So you're looking at getting about 45 minutes of runtime until the battery is totally dead. (Of course it's not good to run a car battery all the way down, and then you won't be able to start your car, so it probably wouldn't be prudent to actually run it for 45 minutes).

If this is going to be a semi-regular event, you probably want to get a marine / deep cycle battery or two. Those have a higher capacity and will withstand discharges better.

Automatic Transfer: Most small inverters just have regular 120V outlets that you plug your load into. If you want the inverter to be hooked up full-time and transfer from mains power to battery power, that will require something more sophisticated and probably a professional installation.

Wire Size & Fuses: As you can tell from my rough example numbers, you're looking at 60+ amps from the battery, which is a LOT. Standard household romex / extension cords is not going to be safe for that amount of current. You must properly size the wire or you will have a fire.

In addition, you should have a fuse on your wire with a rating less than or equal to the wire capacity. The purpose of the fuse is to blow before something catches on fire. If you're regularly blowing fuses it means there's a dangerous problem with your setup.

DC Pumps: If you want to run a sump pump from a battery on a regular basis, you're probably better off just getting a 12V DC pump and avoiding the inverter. You can run those directly from a car battery.

In theory, yes, you could, however you'll need to pay very close attention to the current draw and locked rotor amperage of the sump pump motor. If you've got a couple marine type batteries hooked up in parallel that can handle a 7.5 A or so drain for the 15 seconds it may take to clear the bilge, then you should be in the clear. I don't think I'd consider it on a single battery unless I purchased a system specifically designed to work on one. If you're considering adding a backup capability to the pump you have, I'd strongly consider two marine batteries in parallel with a trickle charger.

With two good batteries, you could probably get through a few (pump) discharge cycles before you outran the trickle charger and depleted the batteries. Of course, this entirely depends on the rating of the batteries and the pump motor.

You could, optionally, just buy a new pump that comes with a manufacturer certified battery back up system, or a pump that can work on water pressure alone if the power fails. As long as your water pressure meets the requirements of the pump, I strongly recommend the latter.

It's neat to build this stuff yourself, but I'd go for a certified solution if you really want peace of mind.

This combination/cannibalization of two battery backup components works reliably for me:

The inverter is a Pump Sentry 1622PS that can deliver 1800W from DC 12v batteries. It also charges the batteries when AC power is on. Fuses are contained in the unit, so no need for inline fuse.

Part two is the Basement Watchdog Big Battery (wet cell). It's the biggest deep cycle battery I could find. I use two in parallel.

Together they power my primary sump pump (3/4 workhorse) for better than 8 hours (in theory) and that's not allowing for the 30off/12on duty cycle of the pump.

WARNING: this system is EXPENSIVE (but cheaper and easier than widening sump pit to accommodate a secondary DC backup system).

If you are thinking of running your sump pump with a power inverter connected to your car it is possible. The limiting factor is the current draw of the pump and the output rating of the inverter. Another consideration is the durability of the inverter since most models aren't designed for continuous use.

Inverters on their own require allot of battery power (like Tim explained) An alternative solution that might cost less or the same but with much better outcome is getting a small petrol or diesel generator.

The benefits are they can pump out a constant wattage as long as you got fuel. If your batteries die out and there is still no electricity - you can't charge them.

Another advantage is that you can pull some wire and place a separate emergency socket in your house and get some lights going, keep the fridge from defrosting, watch tv? or whatever else.

Disadvantage is that the normal sized generator can be loud and need to be hooked into an exhaust if used in doors, like a basement or loft. But you can buy slightly more expensive silent generators that offer the same power but when they run you can hardly hear them and are much smaller.

It all depends on how much power the sump pump needs and any other uses you could use it for. 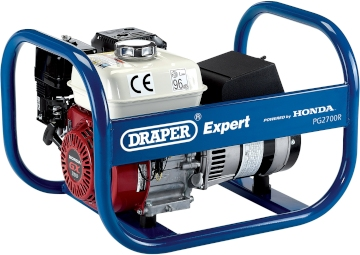 I have ran a 1/3 horse sump pump off of a truck mounted inverter that had a power meter on it and it had no trouble running it. It only pulled 20A from the batteries with the truck not running. That would give a 100 AHR battery around 5 hours of continuous use (probably in actually 4 hours) but if the sump is only running 50% of the time then you can double your outage time. It also seems that DC pumps do not move as much water as an AC pump. Probably running a 1/2 or 3/4 HP pump is going to tax a battery hard. I am seriously considering this as a permanent back up solution. Get a C&D dynasty battery, I have used them in Utility backup and they last around 10 years, worth the money. I have been in my current house for 3 years now and have had to run my sump pump 3 times off of my truck inverter and those C&D batteries are good for 10 years or 300 full cycles which ever is first, batteryshark.com has them for a descent price. look at a 750W Tripplite Inverter/charger. Don't let naysayers that have never done it before scare you off with "advise". Cheers!

Hank's response of just getting a dedicated 12 volt backup sump pump is flawed. You see the 12volt motors/pumps are small, their duty cycle is short and the Basement Watchdog Big Battery is expensive on the long run. My Watchdog batteries died on me every two-three years. That can add up after a few years, and the reliability of idea is just poor. I went through three batteries and two pumps and one flood before I said there's got to be a better way. I built a system with two identical cast iron 1/3 hp pumps (120v, 7.2 amps, ea.) and one is plugged into a 1000 watt inverter running off two 200 amp-hour industrial lead acid batteries. At 7.2 amps (1/3 hp), I have over 5 hours of capacity even with conversion losses and if the pumps were running 100 percent of the time, (which is not likely since the well has to refill between pump outs). The other pump is plugged in to a standard 120v outlet and is used as a primary pump. The batteries have a life cycle of over 20 years (See C & D Co.) . I rotate the pump outlet cords every year, so the pumps get even wear and tear. The only maintenance I have to do is check the battery levels every so often and fill it up with some distilled water. No more dead batteries beeping in the middle of the night (Watchdog)and changing little pumps.

ThomasThomas
1
Add a comment  |
Highly active question. Earn 10 reputation (not counting the association bonus) in order to answer this question. The reputation requirement helps protect this question from spam and non-answer activity.

Not the answer you're looking for? Browse other questions tagged electrical sump-pump or ask your own question.