How does National Electrical Code section 300.4 (D) apply in this situation? 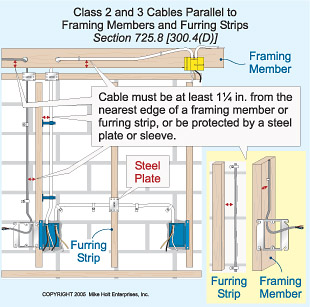 This doesn't make sense since the wire has the same chance of getting hit with a nail if the wire was only 1/2" from the furring strip. I realize that this originated from the fact that a hole in a stud has to be 1 1/4" away from the top facing edge of a stud to keep drywall screws from hitting the wire.

But according to this code a wire can be just under the sheetrock as long as it is 1 1/4 " away from the furring strip. I don't understand the logic. Can you please clear up my confusion?

300.4 Protection Against Physical Damage. Where subject to physical damage, conductors, raceways, and cables shall be protected.

(D) Cables and Raceways Parallel to Framing Members and Furring Strips. In both exposed and concealed locations, where a cable- or raceway-type wiring method is installed parallel to framing members, such as joists, rafters, or studs, or is installed parallel to furring strips, the cable or raceway shall be installed and supported so that the nearest outside surface of the cable or raceway is not less than 32 mm (11⁄4 in.) from the nearest edge of the framing member or furring strips where nails or screws are likely to penetrate. Where this distance cannot be maintained, the cable or raceway shall be protected from penetration by nails or screws by a steel plate, sleeve, or equivalent at least 1.6 mm (1⁄16 in.) thick.

I’m not a NEC attorney nor did I stay in that fancy motel last night but one of the “intents” of “the rules” is to reduce the number of material casualties suffered during construction. A sheetrock craftsman won’t use 16-penny nails to mount sheetrock and is highly unlikely to miss the studs or furring strip with a standard drywall nail or screw, hence the 1 1/4” (and metal plates) rules. Mr. Homeowner, while installing a shelving unit for knickknacks might use a 16-penny nail but I’m confident wiring a house with EMT would turn expensive in a hurry.

12
Why is there 4 inches of metal at on each side of this column?

1
Multiple Loose-Hanging Wires in Finished Wall
3
NEC Definition of "Maintained Spacing" for Wire in Free Air
1
What's the proper procedure for replacing ungrounded circuits?
6
Must NM cables around panels in unfinished basements be protected?
7
How can I secure NM cable to a metal stud?
0
Grounding short section of metallic conduit or raceway used solely for protecting NM from physical damage without junction?
5
Can Romex (NM-B) be run in conduit for more than 10 ft when starting from the breaker panel?
3
Can I use Schedule 40 PVC to protect a grounding electrode conductor where exposed to physical damage?
2
Can I run electrical along a furring strip in EMT?
2
Single Ground Wire Run Under Floor Joists