How can I prevent this concrete block wall from falling over?

I have a concrete wall that separates my backyard with my neighbor’s. It has been there for decades (at the very least 30 years). I have a slope of about 30 degrees and have noticed that the wall is slowly falling over to my side. The rain gutter that my neighbor placed adjacent to my fence is helping in eroding the soil underneath the wall. It can be seen where the soil is slightly green.

I would like to know what I can do on my side to keep it from falling completely over. Already my next door neighbor’s wall fell years ago. I was thinking of maybe something I can do and not having to go to the other side.

One idea in my head was digging a trench and sticking concrete block with rebar and filling with cement. Sort of like a step wall or something, but not sure if it would hold. Please forgive my ignorance; I am a noob with this stuff. Any DIY suggestions would be greatly appreciated 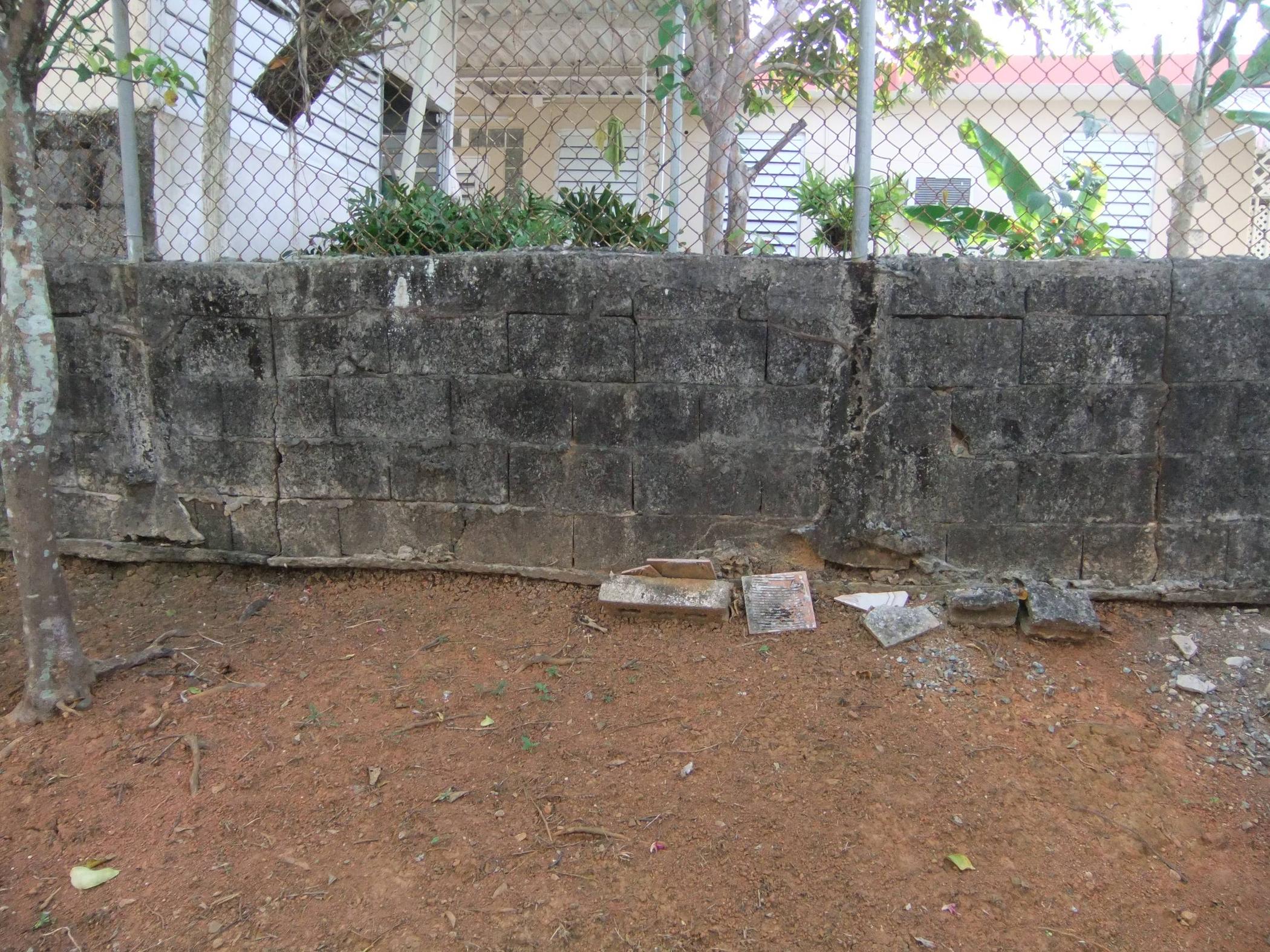 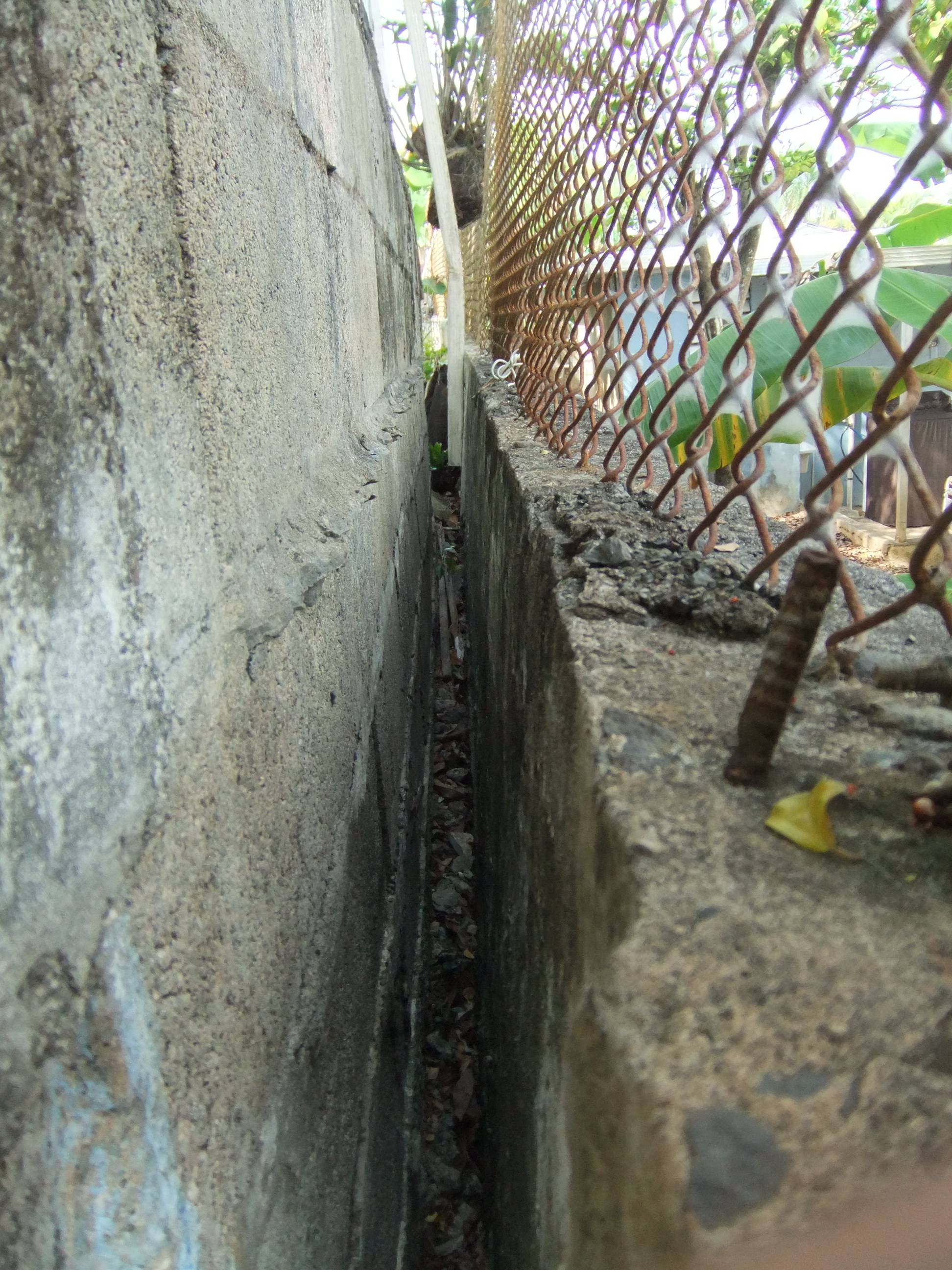 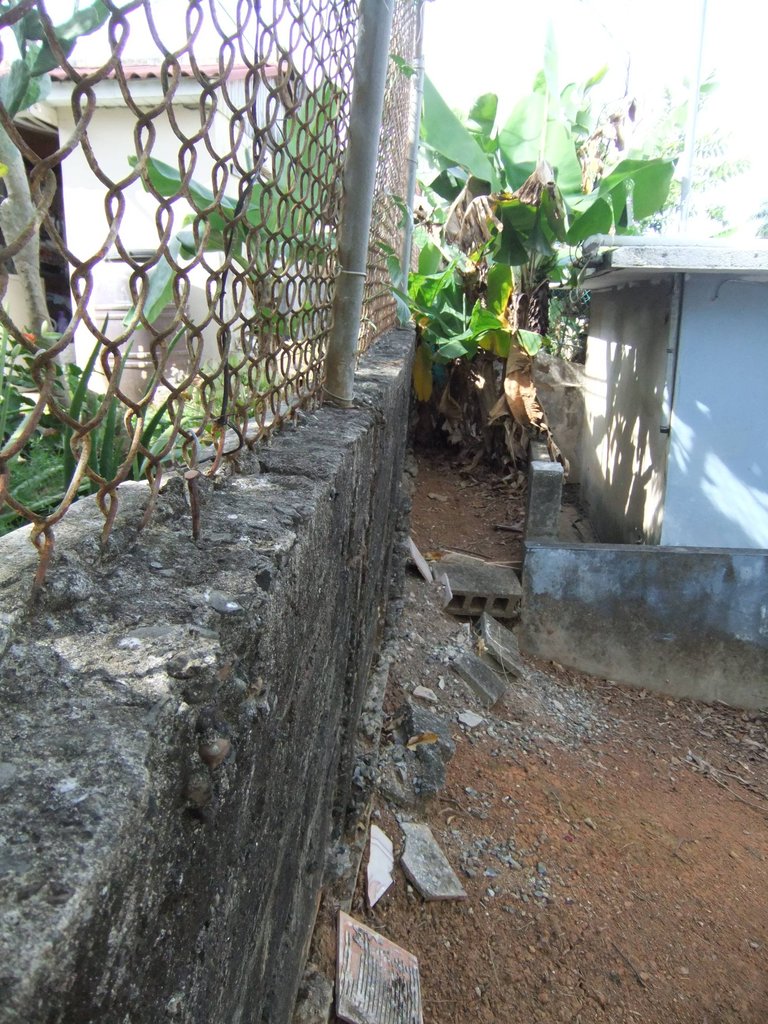 It's really hard to say without being there in person. The wall certainly looks unstable and ready to be taken down, but a lot of concrete walls can look terrible, but still be structurally sound. We owned a house with a concrete block wall reinforced with rebar that had perhaps a 10 degree lean outwards that looked like it'd fall any day, but it took a LOT of sledge hammering, chiseling, jacking, and gas-powered diamond-blade cutting to actually get it out. It likely would have stood for another 50 years on its own.

In your situation, it appears that you've lost all the earth around your footing. At this point, it may be a lost cause and you'd be best taking it out. Ideally, you'd then replace it with a stepped retaining wall using a dry-stacked block. The dry-stacked blocks are a) easier to install and b) when installed properly will allow water to drain through rather than build up behind the wall pushing it out.

All that said, it appears that your neighbor has build a foundation right up along your wall. I don't know where you live, but I'd think in a lot of places that'd be against code (you typically can't build that close to the property line). In addition, it seems risky for them to depend on you to hold up their foundation with your wall. Seems that they should be bearing part of the ownership of whatever is retaining the earth on this property line.

Finally, if that's a down-spout in the lower photo emptying between the two walls, then a) take it up with the city, as that is likely also breaking all sorts of code regulations and b) your neighbor really should be worried about that. You don't want a downspout draining near the footer of your new kitchen's foundation.

Ideally, the neighbour would take the responsibility for their land and fix the retaining wall. I suspect they won't do anything until the whole thing collapses.

If you haven't already done so, I'd first approach the neighbour. See if you can get the water issue dealt with in a way that reduces the erosion. Maybe you both can work together to fix it. It's in both of your interest to do so. Get your wife to bake some muffins to help sweeten the deal? Then see if he'd be willing to also strengthen, fix or replace the wall. Again you may have to work together on that one.

Another option you could take is to think of what you'd do if this was a bank next to your property and there was no neighbour there at all. If that was in your mind then you'd build a new retaining wall in front of the old one is a perfectly valid option.

Going by your pictures it would appear that there isn't much of a footing on that wall and that it could collapse at any time.

I'd build the new wall just off the old against the old and add a bit of a slope against the face of it instead of being vertical, so that the base is wider than the top.

Allow about a foot between the old and the new. Partially fill with p-stones in the void between the walls. Then add drainage pipe - the type with holes in it designed for draining the ground. Then cover that with more p-stones and top off with soil. Put some plants on it and make it look nicer.

What that'll do is it will stabilise the wall. You'll loose a bit of land, but at least it won't fall away.

Whose land is it on? Is it wholly on your land, or on your neighbour's land?

In Australia, you must go halves in the cost of a new dividing fence.

The kitchen that your neighbour built may have imposed a load on the wall that is pushing it over. The wall does not appear to have an adequate footing for core filled concrete block.

The downspout does not help, and should go somewhere else; to an infiltration trench, water course, level spreader, or to the road, or to an easement. The retaining wall next to your house looks to be doing most of the retaining and is in good condition. Pull the other one down. If you need to retain, you can the dry stack like mentioned, or a soldier and whaler/sleeper and post wall that you can erect a fence on top of. It wouldn't need to be high (the sleeper/post part).

The concrete wall does not need to be that high. You can privacy using lighter weight materials.

7
My yard is eroding away and taking my house with it: what's the cheapest way to build a retaining wall to stop it?
1
Can a concrete block be split the same way you cut stone?
0
Layout method using concrete retaining wall block for angled wall
0
How to reinforce this concrete wall that wasn't properly drained and is starting to lean 3/4" from top?
0
Cutting Concrete Block Wall
0
Mounting a pull up bar on hollow concrete block wall
2
Is a concrete slab required to support a block wall?
3
Building a Retaining Wall Next to Fence
2
Should the high side of a concrete block retaining wall be sealed?
5
Is this basement footer going to cause issues?