How can I replace a single switch with two switches?

Here is what I see when I open up the switch box with the single pole switch: 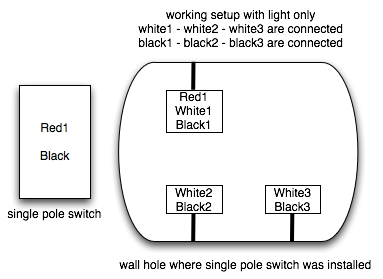 How I do wire the above switch?

I am assuming that the upper wire is the cable that goes to the ceiling where the fan/light is to be installed. If so, you should have a red wire in the ceiling box that is unused and probably capped with a wire nut.

Your description of the switch box seems a little off. If all three black wires were connected together, what wires go to the switch?

In the switch box, all of the whites (neutrals) continue to be connected.

At the ceiling box, the white goes to white, the black goes to the wire for either fan or light, and the red goes to the other. The fan wire colors may vary, but the instructions should indicate which is which.

You make no mention of green or bare wire (ground). In a modern, properly wired system, there also should be these, both from each cable and at the fan. Ground wires are connected together and to the base of devices, switches and metal boxes or fixtures. If they are present, connect them. If they are not, you have an ungrounded system that poses a bit of risk if a device is damaged or shorts out. 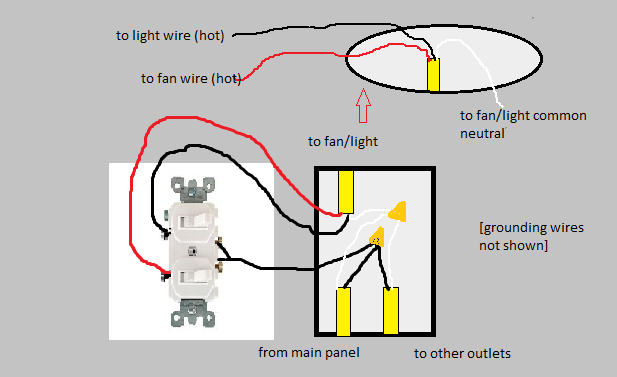 3
Can I replace two light switches with a single light switch?
3
How can I control two ceiling fans and lights with one single pole switch?
2
Wiring a ceiling fan and light switch with two three-cable wires
2
Can I switch my bathroom light and fan separately with two conductors?
1
Extra wires in ceiling fan installation
2
I have two switches for one light. One is a dimmer switch and other is single pole switch
1
Replace a single wall swich (controls light and fan) with a decora dual switch
1
How to wire two switches to control bathroom fan/light combo (only two 12/2 cables in receptacle)?
2
Two 3-Way Switches and One 4-Way Switch Controlling two lights. How do I convert the 4-way to a single pole switch?
2
Ceiling fan (2 wires to 6 wires)