We've been working on our water problem for awhile now.

There is black drain tile under the home (all the way around) tied into a sump crock. Water was only coming in one side. A camera through the tile showed us it's not laid right, like a mini roller coaster, so there are spots for many feet that are full of old standing water that won't come out. About 1/3 of the system is working and taking water to the sump. Where it's not working, water comes in where the wall meets the floor.. It's hit or miss with when and how much.

Instead of redoing what's there, we are having a Sure-Dry system (affiliated with Badger Basement but cheaper) put in along the inside perimeter. They remove cement, lay this perforated piece that looks like rain gutter almost, but has a high back on it. The back will go along the basement wall to catch any water that may run down the walls as well as any water that would normally come in at the floor along the wall. It goes to their sump pump and will head far out into the backyard. 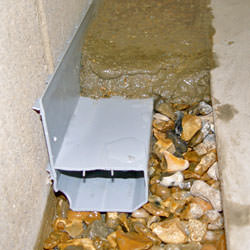 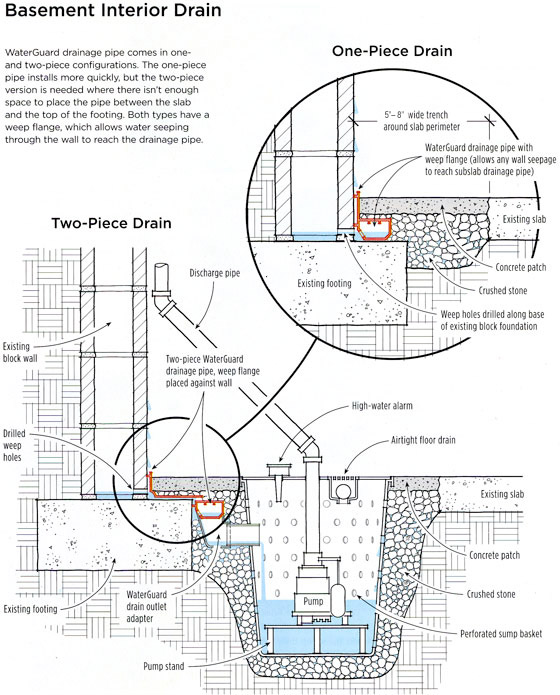 This is being done tomorrow.

My basement has no water in it right now but is very very damp. I have mold growing on the floor along the perimeter. It smells pretty bad down there as well. We run a small dehumidifier which will get us to low humidity but if it stops for a few hours, it's right back up there again quickly. The bedroom feels damp. It's almost like the blankets feel cold and heavy, but not necessarily wet.

My question is since there's no water inside right now and the dehumidifier runs, will this type of waterproofing system eventually help the cement floor dry out? The basement is supposed to be finished again in August. It was previously, but we ripped it out to do repairs. I'm thinking there's so much water under the house, that even though it's not rising right now to come it at the places it normally does, it's still wicking moisture up through the floor along the edges. Or maybe the slab itself is still holding water until things can get dried out. When they put their system in, they will be filling the old sump crock pit so that entire old system will be out of commission.

Neillsville WI is clay type dirt as you go deeper. I think we're sitting in a mud pit but am worried the system I'm putting in will only address the water coming in but won't help what's under the house dry out over time.

I will be cleaning with an antimicrobial cleaner before refinishing. I don't know if I should put anything additional down on the floor before laying carpet again (no pad).

Thank you for your time everyone! Now that I've learned they drill weep holes into the wall, i'm fairly certain this process will dry most of my water out in the ground as well as help my slab dry once we get the water moving. I think it will be longer than just a few days. It's going to take some time for the water to move in, pump out and eventually dry out. :) You've all been very helpful!

I remember Neillsville from "The Rock" radio station. ;)

So, to answer the question, we need to know where the water is coming from. You mention that it's due to a high water table.

As such, I'd not ever finish the basement. It will always be one power outage or one clogged drain away from being ruined again.

It also means that your dehumidifier will never 'win'. Basements are moist by default simply due to cooler temps, but if you have constant hydrostatic pressure, it will always be an uphill battle.

Your (what I call) interior footer drain will certainly help, but you're at the mercy of the drains always remaining unclogged and the sump pump always having power. You'll also have to make sure it can handle excessive rain during those big midwestern downpours.

If it was merely an occasional rain/snow melt issue, I'd feel OK finishing the basement, but given the high water table, I'd consider rethinking doing a full finish project down there.

If your water problems are primarily at the footer, It may be OK. As that is exactly what the drain system is designed to handle. But if you have actual cracks in the walls and water is coming in there, I'd be definitely be hesitant.

One other note...a bit further west into MN, the clay soil we were on had a lot of radon. So you may want to get a radon test before thinking of finishing the space as well.

Oh, one last comment: note that the systems being proposed are in no way 'waterproofing' systems. They are water abatement systems--in that they are designed specifically to not be waterproof and actually allow the water to come in so it can be moved out. It's a nit-pick, for sure, but actual waterproofing is an entirely different discussion.

The short answer is no. Every basement, regardless of getting seepage or not, will in the high humidity/rainy months, have humidity levels most likely over 50%, which is the cut off point. The EPA, AMA, ALA all say that for the healthiest air quality and prohibiting mold growth, you want it under 50%, ideally around 40%.

The internal drains will stop seepage from coming in. It will not safeguard against moisture, humidity, or condensation. EVERY basement waterproofing company will state that in their contract. Mine does.

"How does this system address sloping the drain to a sump? It appears that the 'drain tile' sits in a fixed position above the footer, meaning its level... – HerrBag"

You are observant. That's why when you need French drains installed, you always want a company who installs perforated PVC pipe AND pitches the pipe down to the sump.

Use this page on my company's website as a reference: http://www.aridbasementwaterproofing.com/index.php/solutions/article/french-drains

I am a residential builder, having lived in Milwaukee and Oshkosh for the first 35 years of my life. As one of the other people correctly stated - no, an internal water barrier will not fully solve any drain tile issues.

With that being said, I think you may be experiencing simple condensation as opposed to drain tile issues. The ground outside your basement walls will be cooler than the basement air, sometimes much cooler. This cold is transmitted rather efficiently (especially if it's solid concrete) through the walls via conduction. Through the use of a psychrometric chart we can see that warm air has the capacity to hold much more water vapor than cold air, relatively speaking. In fact, that's why humidity is called "relative humidity", because it is dependent on the temperature of the air.

So, essentially, the inside of your basement walls are acting like an ice cold glass of lemonade on a warm, humid summer day. The warm air in the immediate vicinity around the glass is cooled down to below the dew point. The cooler air can't carry as many "grains" of water, and it literally begins raining on the exterior of your glass (condensation).

The water droplets will begin to coalesce on your basement wall, and eventually start dripping down to the base via gravity. There, the water may start to puddle up and begin looking a lot like drain tile failure. If the walls are unpainted, the lower section of blocks/concrete will darken as they absorb the water running down.

Good news is that this "condensation" theory is easy to test! Just paint a section of the wall with Drylok (or whatever block sealer) and see what happens. If it's condensation, the paint will do little if anything to prevent moisture from condensing on the surface of the wall. This is because it's still the same temperature. The paint can "hide" the water condensation, though, because you'll no longer see the darkening effect the water has on the concrete. If you run your hand along the painted wall, however, you'll probably still feel the water on the surface. The pooling at the base may actually appear worse than before because the Drylok is working; it's preventing the water from absorbing into the concrete as it was before.

I live in a very hot and humid South Carolina now, and there are mostly crawlspaces down here. There is a residential code rule that states there needs to be a minimum number of vents present to "dry out" the crawlspace. Problem is, you're fighting against the laws of nature when you're trying to "dry out" an area under the house with 90% humidity air that is also 20-30 degrees warmer. Predictably, the warm and humid air condenses all over everything.... exactly the opposite effect that the airflow was intended to accomplish. In the "winter" down here there is no problem at all, because the air under the house is often warmer than the air outside.

The dehumidifier will be your only really cost-effective option in the hot, humid summer months when the walls are cold.... if condensation is the issue. If it is indeed the drain tile, you may want to install a sump system on problematic walls in addition to installing/replacing interior drain tile. The only true fix in this instance is to excavate the exterior, fix the drain tile, waterproof the walls, install dimple board, and re-grade. It's expensive... usually between $25,000-$50,000 depending on the number of walls and if any steel reinforcement beams need to be added to the inside.

Not the answer you're looking for? Browse other questions tagged water basement floor drainage sump-pump or ask your own question.

0
Basement Subfloor for Moisture Problems
1
Moisture on crawlspace dirt/clay floor
3
How to remove hydrostatic pressure from basement floor so we can finish part of the basement?
2
Do I need to install drainage medium for my sump pump to work well in an old basement?
1
Why is there moisture under some new wall plates in the basement?