How do I repair my cracked shower pan?

My shower pan, made of gel-coated fiber glass, has three cracks, as shown in the photo below. The cracks radiate fairly straight from the drain in the center at twelve, four, and eight o'clock. (All of the other white streaks are just gel-coat coloring.)

I ground away the cracks and filled them with epoxy, which seems to work okay for the time being. But I would like to know what my options are for a more permanent fix that won't significantly reduce the value.

Replacing the pan is the last thing I want to do. The pan matches the shower walls and a whirlpool bath. A lot of things would have to come out to get to the pan, and I can't imagine a matching pan replacement would be found.

I saw a video where someone had what appeared to be a process for this kind of repair. This involved what looked like an epoxied sheet that covers the entire pan bottom on the top side. I don't know what this is called and I don't know what kind of tradesman I should contact to do this sort of fix. (It doesn't seem like something that a plumber/pipe-fitter type would specialize in.) If someone can point me in the right direction for this, I would appreciate it.

Any other ideas on what I can do and what is common for addressing this sort of problem would be appreciated.

The shower is on the second floor and there is some water damage to the ceiling below. As I walk around the shower pan, I can hear some creaking, and I assume this will lead to flexing and open the cracks up again. I may need to resolve that, too, in the final fix. Does anyone have any suggestions about this?

Also, help with the tags would be appreciated.

From what I have seen in the answers and comments, I need to seriously reconsider how I might remove the pan from the top, remove the subfloor, mitigate any water damage between the subfloor and ceiling below, then rebuild in reverse.

I need to understand how the pan is seated, so I have to examine the situation a little more. But I may be able (with some risk of damage) to remove the shower wall on the shower-head side and remove the short wall under the seat at the other end. Remove the glass enclosure (I did this once before, but I did a hell of a job gluing it back together :( )Without removing the wall opposite the glass door, I might be able to lift the pan out carefully. I have to disengage the drain first, and I don't know how that attaches to the pan. (Do I need to open up the ceiling below so I can get to it from there?)

This sounds complicated mostly because I'm guessing how it's all put together and how things are fastened to each other.

My goal would be to repair the pan rather than replace it.

Putting it back together, I suppose I can strengthen the pan with fiberglass on the bottom. As for dealing with irregularities that could cause it to rock, isn't there something I can bed the pan onto the subfloor with? 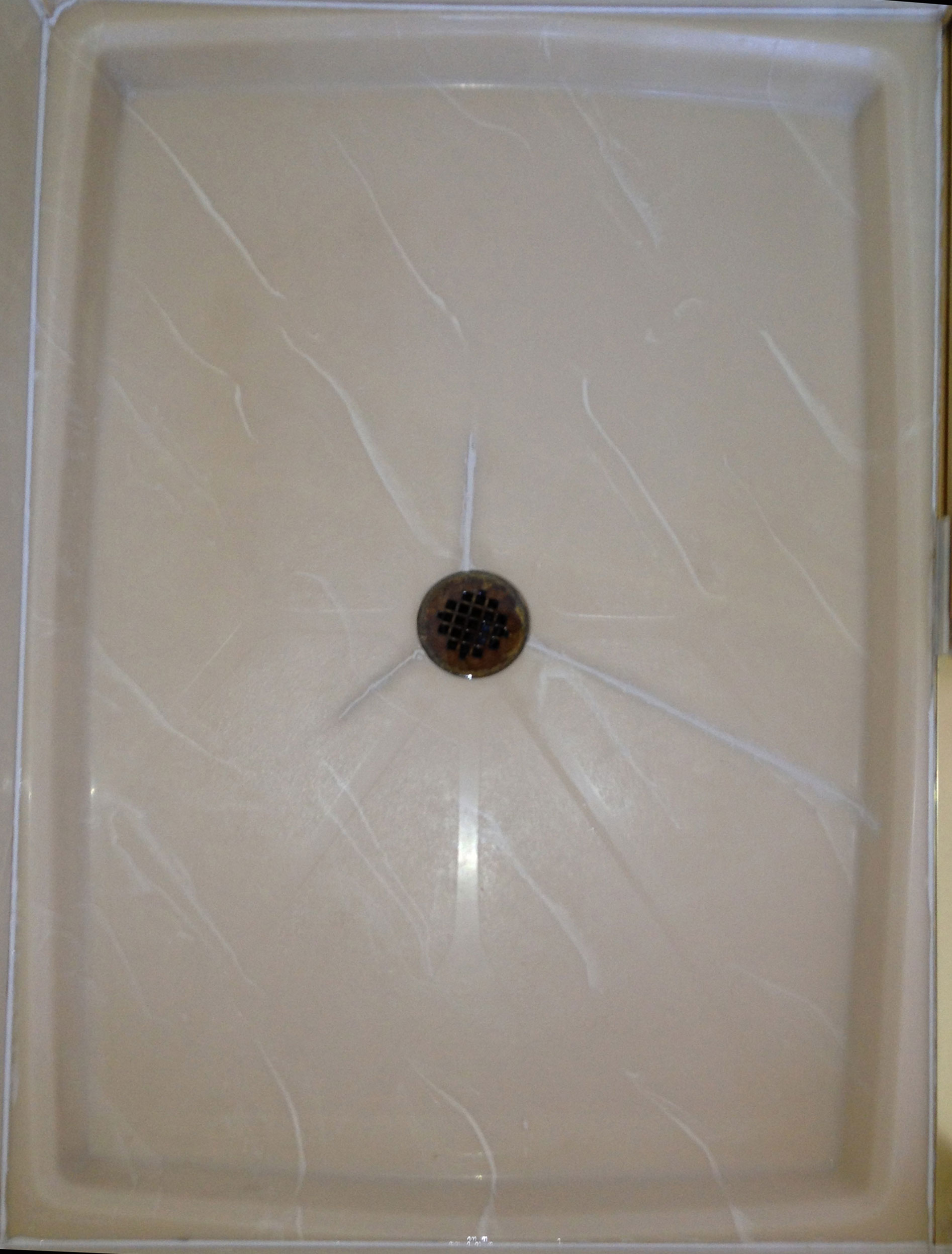 You need to fall out of love with this pan - it is broke. Why would you want to go through all of this work and compromise your work with a broken pan? This is a decent size project - GET A NEW PAN. If you want cheap get a used (unbroken) pan off of craigslist. These pans are not that much compared to how much it will cost you to do this again.

You are trying to build a temple on a broken foundation. No amount of patching will fix the broken connection between the drain and the pan.

Without some type of oversize flange drain (e.g., Schluter Kerdi Drain), there is no way to transfer the water from a overlaid membrane into the drain proper, because the seal around the drain to the pan has failed.

As far as the creaking goes, once you open up the ceiling, you will see if the subfloor is intact or water damaged. If intact, some cross bracing under the pan area can be installed (2x material of the same depth as the joists, can be hung with joist hangers). The typical source of the problem is insufficient web structure under the pan, allowing flexing. Another source is too large a cut-out of the subfloor and drain movement.

AFA who, a contractor specializing in remodeling and baths. It is a blend of trades: plumbing, tile setting, carpentry, drywall.

What you need is called an Tub Inlay. It consists of what appears to be a bathmat that is fused to the shower floor giving it strength.

Look for a local tub refinishing company, many of them provide this service.

Make sure you ask about the adhesive they use. You want to make sure the adhesive being used fuses the inlay to the shower pan and not just glues it down. All the DIY kits I have seen merely glue it down. This will cause problems over time.

The down side is that you will be limited in color. Usually they are bone or white.

If you need help locating someone that can help you, let me know.

I have recently repaired a cracked leaking shower pan. Here's the process I used:

Use a 4" mini grinder with a 1/8" thick metal cutting wheel. If you think the drain to pipe connection has failed, mark an 8 to 10 in. square around the drain, then cut through the pan. A short blade jig saw will work for this part and makes less dust, it's just a little slower.

Lift out the loose pieces of pan and inspect. If there's little to no structural damage to the floor decking and ceiling joists, clean and paint mildewed wood with Terminate Wood Preservative and Treatment.

Cut out remaining cracks to a width of 1" to 2". Mix Premixed mortar with water till it is pourable and spreads rather than piles up when poured on a flat surface. According to how large your pan is, you will use 4 to 5 or more 50 lb. bags. Fill the entire void under the pan to within a 1/4" of the surface; don't worry if you pour too much as you can scratch this out before it sets up.

Give it 2 or 3 days to set up. Now mix and pour a 2 part fiberglass resin and pour to within a 1/16" of the surface. This is a little more tricky to get level right, so first apply tape around the edges and have rags and acetone on hand for clean up. Lowes, Home Depot etc., sell a tub and shower crack repair kit that you will mix and fill the remaining 1/16th inch depression to bring the surface flush with adjoining undamaged pan. Let cure and polish per kit instructions.

NOTE: If upon your initial inspection, after you have removed the first pieces of pan, you find more than minimal damage/rot you must make necessary repairs to the floor decking and joist from underneath and then continue as described above.

6
How high must a shower pan curb be?
0
Waterproof front lip of shower pan that is beveled for entry?
1
Leaking tile shower at corner near glass door
1
How to correct burying cement board into shower pan concrete?
1
Shower pan drain leak
1
Repair shower drain leak
0
Cracked subway tile on shower cub after remodel: what's my next steps
2
What is the correct material to reseal a shower pan to a drain pipe?
1
Medium term repair for cracked shower pan
0
What kind of material is this (for a shower pan) and how to remove it