What is the name of this cast metal part inside my lockset?

I have a Baldwin front door lockset that doesn't completely retract the latch when using the thumb lever. The handleset is similar to this: model 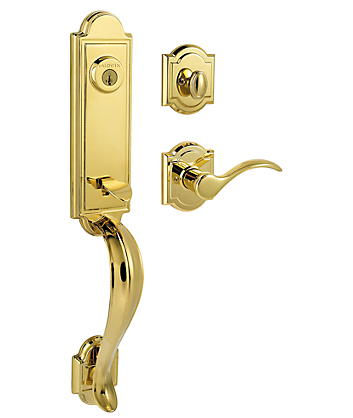 After dismantling the thumb latch assembly, I discovered that the source of the problem is a broken tread/collar in the mechanism that the thumb lever pin rests in. I'd like to replace this piece, but I can't seem to find it in any of the online catalogues (build.com, handlesets.com, etc.). Any idea what it's called? The only reference to a part number on it is "05/02." I'd like to avoid replacing the entire lockset if possible. 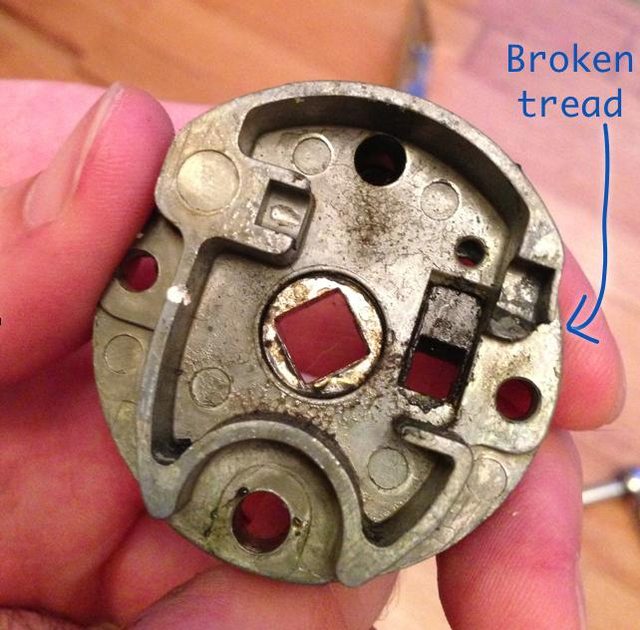 From surfing a bit, it seems Baldwin has a variety of handlesets that work with a limited number of their locksets. If you can't buy just the plate, you might only need to buy the lockset.

It seems to be called a 'Landing Plate' 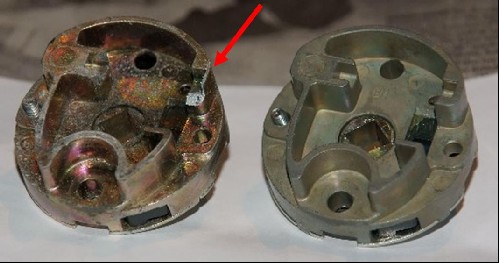 We’ve had two Baldwin handle sets fail on our new front door in the past six months, and I finally figured out why the manfacturer included a second landing plate with the set.

Basically they must have known it would fail prematurely.

The thumb latch is a lever that sits on a set of little pins set on a brass die casting, shown above, which allows it to toggle up and down. Unfortunately, brass die castings are about making things fast, and such parts typically have crappy structural performance and are prone to stress cracking.

What probably happened is that a tiny crack formed on one side of the casting and propagated every time we squeezed up and down on the handle. One side failed (red arrow) and our door handle starting twisting at an odd angle. Thankfully we replaced it with the second landing plate before we were locked out of the house.

After going through two sets, we bought a new set and discovered that designers finally figured out they needed to reinforce the casting for the load by reinforcing the area where the pin sets (right image).

The part name isn't relevant at this point as Baldwin has re-engineered the part. If you have an older one call their tech support and explain the problem and they will send you a conversion kit that will fix the problem.

Not the answer you're looking for? Browse other questions tagged doors lock hardware or ask your own question.

2
What is causing discoloration on my bronze-finished lockset?
4
Does anyone recognize this door part?
1
What do you call this thick washer-type part?
2
How to remove this door knob on the mortise lockset?
2
Which parts are missing from this vintage lockset?
0
Looking for name of door trim part
1
Schlage single cylinder lockset won't release from the door
13
What is the name of this metal bar with holes at the ends?
6
What is the name of this Allen-head furniture fastener?