Are directTV dishes energized in some way?

Are directTV dishes usually energized in some way?

I was recently at my grandmothers house installing an over the air digital tv antenna. I decided to use the same coax cable that originally ran to her directTV dish.

I first unplugged the DirecTV receiver then checked other rooms in the house for receivers.

I then looked around for where the coax plugs entered the house. The installer had drilled through the walls in each room and run the cable on the outside.

When I climbed the ladder to remove the old dish I was mildly, but quite irritatingly, shocked. Any time i put my hand back on the bolt I continued to receive this mild shock.

I then went inside the house and turned off the main breaker. Came back out and absolutely no shock.

Is this a symptom of a grounding problem of some type? I have touched a live 120V lead before, and it was a SIGNIFICANTLY worse shock.

Any ideas? Also let me know if this question should be retitled.

Yes, satellite dishes are frequently powered by DC current over the coax connection. The DC power comes from a "line power inserter" which will attach somewhere to the coax before it reaches the TV's. It may be a single connection or a splitter as well, but either design will connect to an outlet. 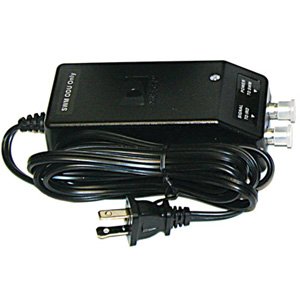 Edit: As others have mentioned in the comments below, the injector may also be built into your set top box.

Most satellite dishes have something called an LNB at the focal point of the dish which is powered.

Power for the LNB is from the satellite receiver which is either from a set-top box or built into the TV.

It's unclear why you're getting a shock off the dish itself, you shouldn't. It sounds like there is another power injector as indicated in BMitche's answer. Hunt it down and remove it if needed.

Not the answer you're looking for? Browse other questions tagged grounding tv-antenna or ask your own question.

5
What are some quantifiable metrics for comparing digital antennae?
7
How do you ground residential network equipment?
1
Why can I receive low band VHF on one tv but not another?
1
TV antenna installation: How to ground
2
How Do I Bond My Antenna to Home Electrical Ground?
1
External TV antenna grounded inside attic?
4
Cable TV, Antenna, Coaxial - what is this thing?
28
How did my ground and neutral become energized by a short in the buried main line?
0
Looking to ground roof mounted mast - No ground rod at service entrance