How would I wire a thermal circuit breaker and switch together?

I want to wire a circuit breaker and switch to a GFCI and some other outlets. This is for power outlets on a work bench.

I have this for a circuit breaker: 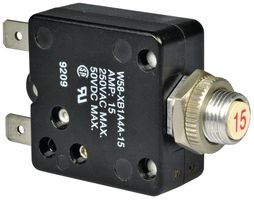 and this for a switch: 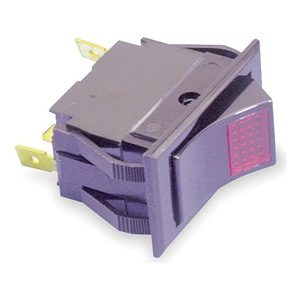 How would I go about connecting these and where would each wire go on the circuit breaker and switch. In other words, where does the load wire go and the line wire go.

The trivial way to do this is to buy an off-the-shelf power strip with a switch and 15A circuit breaker, and plug that into a 15A-or-more GFCI outlet.

If you don't want to replace the existing outlet, you can do what I did: Buy a standard 15A 3-prong power cord, a GFCI, a box with an outlet faceplate, and a strain relief. Knock out an appropriate size hole in the box, install the strain relief, run the power cord through that into the box, wire the power cord to the GFCI (with ground to the box as well as to the GFCI), close the patient. Bingo, portable GFCI that can be plugged into any 3-prong outlet.

Or you can look for a power strip that includes its own GFCI. Some do exist.

Yes, you can wire this up from scratch. But if you have to ask how to do so, it's safer AND not significantly more expensive to just plug together parts that are already UL-certified.

Having said all that, the answer is that there are several possible arrangements that would work but the one I'd set up for you would probably be:

GFCI Controlled Hot Out to hot of other outlets. NOTE THAT THIS IS A DIFFERENT CONNECTION FROM GFCI HOT IN. READ THE INSTRUCTIONS CAREFULLY. DO NOT GET THIS WRONG.

Neutral from wall to GFCI Neutral In.

GFCI Controlled Neutral Out to neutral of other outlets. NOTE THAT THIS IS A DIFFERENT CONNECTION FROM GFCI NEUTRAL IN. READ THE INSTRUCTIONS CAREFULLY. DO NOT GET THIS WRONG.

Ground from wall to ground connections of GFCI and all other outlets.

If the reasons for doing it this way aren't obvious, STOP and get someone more experienced to work with you.

Pretty simple question that seems to have gotten out of hand. I believe the OP was trying to fix or modify a work bench like this one, pictured. These would be the correct off-the-shelf parts... pretty legit if you ask me.

Good luck finding a non-Decora GFCI for it, no wonder they needed a seprate GFCI.

Why not rig a conventional AC line switch downstream from the existing outlet, then the GFCI outlet. Then you can plug a 15 AMP circuit breaker outlet tap into the GFCI? 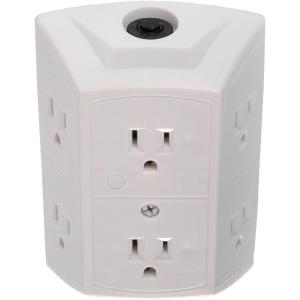 This allows you to use standard line components in standard boxes. Rigging non-code based switches in non standard boxes followed by what looks like "standard" a GFCI and outlets just seems like a very bad idea, and it is probably a code violation.

Obviously, despite the multiple outlet ports, you need to be sure not to overload the circuit.

I agree with the other comments and answers that call out that the components you've identified seem dodgy and that you could be using off-the-shelf parts.

That said, I agree with the general idea of what you're trying to do and I have built a similar system in my shop; let me describe it for you.

First off, the shop outlets and the shop lights are on separate circuits. This is important. If a power tool blows the outlet breaker I want the lights on while I'm holding a spinning, overheated, probably electrically faulty power tool. The table saw is also on a dedicated circuit.

The circuit has a 20 amp breaker, which protects against overcurrent situations that could set the house on fire.

Second, the shop outlets are all downstream of a GFCI. In retrospect this might not have been a great idea. The shop is not damp, and induction motors can in theory change the current on the neutral when starting up and shutting down -- remember, induction is proportional to the rate of change of current, and current changes rapidly when the tool switch goes on or off -- enough to trip the GFCI. In practice I've never had any problems with it, but the GFCI in my garage -- which has a thickness planer plugged into it -- trips occasionally.

The GFCI protects against ground faults that could electrocute a person.

Third, I have custom wired the following arrangement. An armored cable with an outlet end goes from a GFCI-protected outlet to a metal handy box with one of these:

This switch has a number of interesting safety properties. It is rated to very high currents. The paddle makes it very easy to turn the switch off. And most important: if the power fails -- because the GFCI trips, because the breaker trips, or because the power to the whole house fails -- then it automatically fails to the off mode.

The dangerous scenario that this mitigates is: suppose the power fails while you are in the shop. Now you are standing in a dark room with a spinning power tool, which is already bad. Suppose you manage to safely put the tool down in the dark just as the power comes back on. Now you have a spinning power tool on your bench in front of you, cutting into who knows what and possibly kicking back towards you.

That switch then powers an outlet -- also in a metal handy box -- which I have a chop saw and dust collector plugged into. When the switch is on, the dust collector turns on automatically -- I leave it switched on all the time -- and the saw is powered. I never leave the saw powered by accident because the dust collector would still be running, and I cannot run the saw without running the dust collector.

As for your 15 amp breaker, I wouldn't bother with it. Replace the 20 amp breaker at the panel with a 15 amp breaker if you're paranoid about overcurrent situations. If you do want yet another breaker, again, put it upstream of the safety switch. If the breaker trips then you want the switch to fail to the safe mode. And again, build everything out of off-the-shelf-parts designed to fit into metal handy boxes.

I agree with @bib, this seems like an unusual set of requirements. I don't have an overall answer but let me offer some suggestions:

Not the answer you're looking for? Browse other questions tagged electrical switch circuit-breaker or ask your own question.

8
How do I wire a GFCI/Switch Combo?
6
How should I wire a GFCI outlet and a switch to isolate the switch but provide GFCI protection further in the series?
4
How would I go about adding more receptacles to a garage?
2
How to add GFCI-protected switches and lights to a 2-wire garage circuit
0
Why does netural wire on switch bypass circuit breaker?
1
Inserting bulb into fixture causes circuit breaker to blow,
0
Flipping switch (by itself) trips breaker
0
Do I have a Bad GFCI Circuit Breaker?
2
Will a combo afci/gfci breaker solve my light switch neutral issue
0
Circuit breaker that fits in a spot for a standard light switch?