How does a two-piece water softener work and what maintenance does it require?

I've read that there are single units and conditioners with reservoirs. I've gathered that they both need to be replenished with conditioning salt. I have a two piece (below) unit and am wondering how exactly it works and what kind of maintenance I am supposed to perform on it.

When I looked in the reservoir, there's only a small amount of water and it doesn't look like there's any salt: 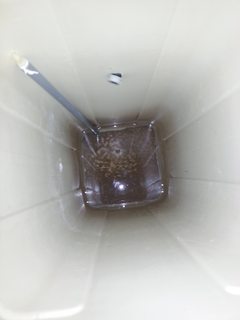 From online research, it seems as though I have a unit that refills daily which is wasteful. I recently saw a single unit from Costco and am curious whether this would be better than what I currently have. 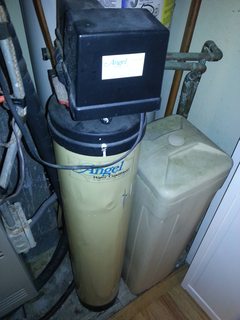 The reservoir of your unit needs to have a reasonable amount of rock salt in it in order to create a brine. You can fill it with salt, then check it occsionally and refill when you can see water over the remaining salt.

The Costco unit you linked still has two tanks, they are simply contained in a single package. Ion exchange water softeners all work on the same principal. Other methods of softening include chemical treatment, reverse osmosis, and distillation. Hard water is caused by dissolved minerals, mostly potassium and magnesium, in the water. These minerals can precipitate out and cause deposits of scale, as well as prevent proper functioning of soap chemistry.

Water can be softened by exchanging the undesirable mineral ions with sodium ions which do not precipitate and do not interfere with soap chemistry. This is achieved by passing water over resin beads that have been soaked with a brine solution such that they are saturated with sodium ions. Because of the way the resin is chemically charged, water would rather have sodium ions and the resin would rather have potassium and magnesium ions, so an exchange occurs and the water is softened.

Eventually, the resin's supply of sodium ions is depleted and must be recharged. This is done by exposing the resin to a concentrated sodium brine. The high concentration forces out the accumulated magnesium and potassium ions and replaces them with sodium ions. The recharge water, containing unabsorbed sodium, as well as potassium and magnesium ions is then flushed away.

It is unfortunate if your unit recharges once a day no matter what. Most softeners have more flexible methods of determining when to recharge, either by time passed or amount of water used. Measuring water used directly addresses the important variable, but timers generally work well once you determine the typical water usage of your family.

Ion exchange softeners are pretty much maintenance free other than replenishing the salt supply. The manufacturer of the softener in my home suggests adding a half cup of household bleach to the brine every time the salt is replenished to keep any potential growths of algae or bacteria from gaining a foothold as the only other maintenance item.

Not the answer you're looking for? Browse other questions tagged water-softener water-quality or ask your own question.