How do I replace part of my bathroom ceiling?

I had a leak in the roof above my bathroom. I had a contractor investigate. He looked at the roof carefully, and he examined the ceiling with an infrared scanner while it was actually leaking. He explained that the leak was caused by runoff from the upper roof, running across this lower not very steep one, and the water was pooling in the keys of the shingles and finding nail holes. He told me to get a downspout extension to route the upper roof's runoff into the gutter, which I have done, so I feel hopeful there will be no more leak.

However, my bathroom ceiling was damaged by the leak and at least part of it needs replacing. I have attached a picture, showing that the leak came through the fan and to the side of the fan (circled areas). 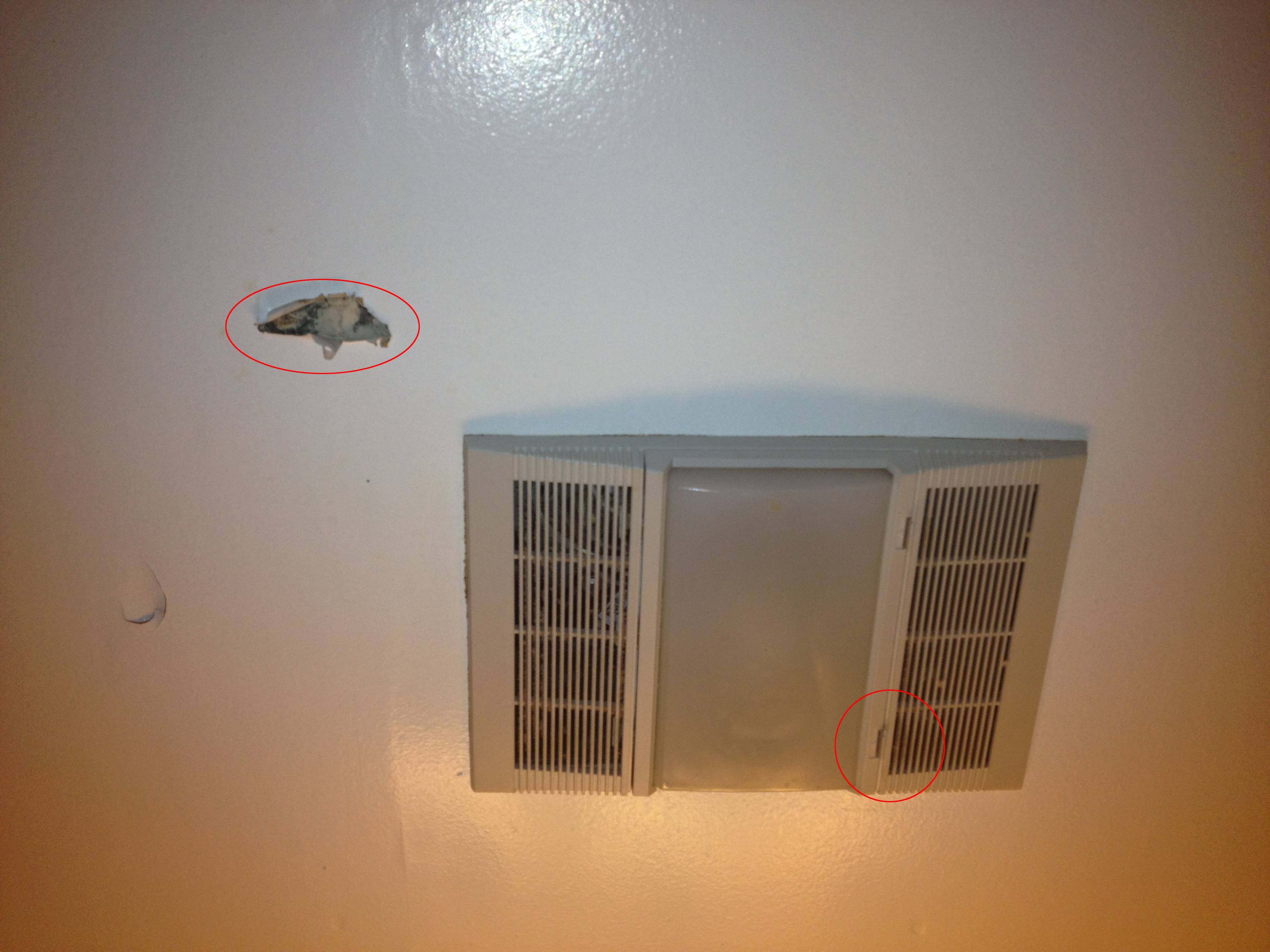 You can see there is mold in the peeling paint. There is a smaller hole where my husband's thumb easily poked through when it was really soaked.

Do I need to replace the fan as part of repairing the ceiling? Should I assume there is mold in it, but even if so, could I clean it out?

What is the best way to replace the ceiling? I've never replaced a wall or a ceiling, though I've done a lot of spackling and painting. My husband and I both do a lot of small repairs, too, so I think we can do it. I would welcome detailed instructions or pro tips.

The fan may be able to be salvaged, only inspection and testing after it has been dried out can determine this. All the components should be removable from the metal box that is fastened to the ceiling joists. Be sure to turn off power at the breaker before doing any electrical work, though many fans simply unplug from the containing box. Just to be safe. Power can be restored once everything is out and any loose wires capped with wire nuts, one to each wire.

Dry out the components and inspect for mold. Any mold on non-electrical components can be cleaned with a bleach and water solution. If the motor appears moldy or water damaged, it's best to replace the fan.

Assess the limits of water damage in the ceiling, it can be much more extensive than is apparent from the painted side. All water damaged gypsum board or plaster must be replaced. From here on, I'll assume this is a gypsum board ceiling. Locate ceiling joists adjacent to the damaged area. Cut out a rectangular area slightly larger than the damage with edges falling on the center of the joists. You can cut between joists with a handsaw, but you must first be sure you are not damaging any wiring. The wet board can be pulled out by hand, allowing enough access to determine if any wiring is in the way.

The cuts along ceiling joists can be done with a utility knife. Be warned you will likely hit screws or nails along the way, remove them as you find them. Before doing this part, try to determine if the water damage extends into the next joist bay by inspecting from above, if possible.

Once you have removed all wet material, cut a new piece of gypsum board to fit the opening. Screw in place along each joist at each edge and every couple feet if it gets that big. Also screw in place the original board's new edge where nails or screws were removed. The technique for patching the joints is the same as for taping and mudding end joints of new gypsum board, there's many references on this process. It's not much more than hard core spackling.

Once the joints have been blended out enough to appear flat, prime and paint to match the remaining ceiling. This will all take some time, mainly waiting for the joint compound layers and paint coats to dry. The only hard work is cutting out a rectangular shape.

Not the answer you're looking for? Browse other questions tagged drywall ceiling patching-drywall or ask your own question.

2
How do I refinish a bathroom ceiling after it got moldy and peeled?
5
How to permanently remedy a patch of mold on a ceiling from a water leak above?
4
What are the structural and health issues for a long-time slow-leaking toilet?
1
Mold in my bathroom is spraying bleach and painting over with Kilz enough?
1
What materials to use replacing a water damaged bathroom ceiling?
1
How do I protect and insulate a ceiling built against the roof?
2
Ceiling leaking from upstairs bathroom ONLY when water supply is turned OFF
4
Bathroom flooded by condo upstairs. Can there be mold on the drywall between the floors?
1
Repair crumbling edges of deliberate (wanted) hole in plaster ceiling
0
What to do about water in ceiling from leak?