How do I wire this bathroom fan?

I am replacing a bathroom fan. The switch on the wall has three switches that were in use (one for the fan, one for the light, and one for the night light). I already took out the old fan and now when I go to install the new one, I'm confused as to how the old one was wired.

My new fan has 3 wires, one black, one green and one white. My home was built around 1970. The old fan had two conduits mapping to it. From one there is a red and a white wire. From the other there is a set of 5 white wires and 1 red. How do I wire this new fan?

Here's the non-contact test, this video is with only top switch on:

for just middle switch it's opposite, and just the bottom switch both those same wires have the slow beep.

I should note that on this particular non-contact tester the slow beep is 12-48 volts and the fast beep is 48-1000 volts. 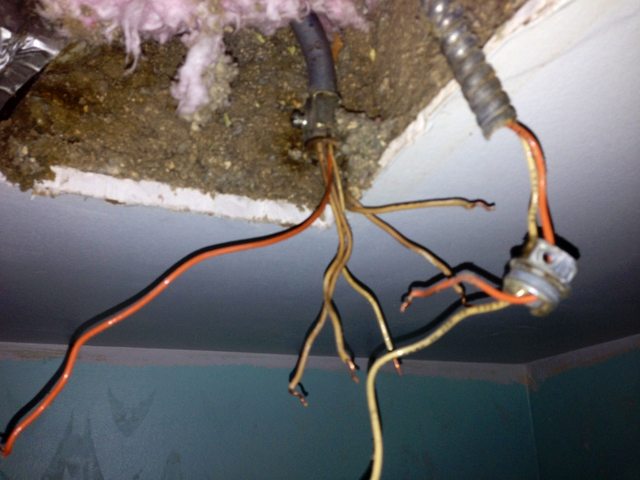 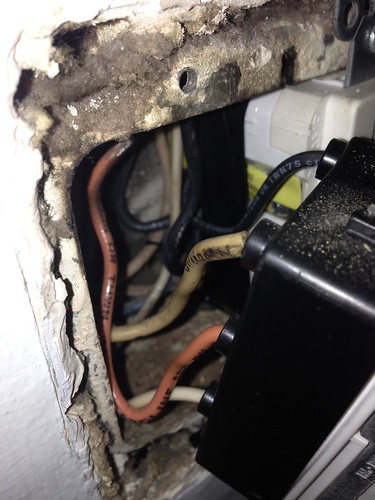 You need to identify the line, the load, and each of the switched wires. When everything is disconnected and the power is turned on, the line is the wire that will be hot. Use a non-contact tester to locate this, and follow the appropriate safety precautions to avoid electrocuting yourself (if you don't know these, it may be time to hire an electrician). The line could be coming directly into the fan box, in which case it's likely the separate pair of two wires. Or it may be coming in at the switch.

Next, turn on each switch and see which wires become hot, again with a non-contact voltage tester. Note which wire belongs to which switch. If there's no current going to the switch, then the line isn't connected anymore and you can instead use a continuity test from the wires in the ceiling with each switch turned on individually. This can/should be done with the power turned off.

Finally, determine where your load is going, if you have any. This is going to be any remaining wires, and you'll know where they go by all the items that don't work when the power is switched on. If the pair of wires in the ceiling isn't the line, then it's the load.

My best guess, updated from your video's findings, but without being there to test anything or get a better look at how wires are tied together in the back of the switch is:

And to hook it up, if my guess is correct:

Did the old fan also have a light, or was it just the fan? Where are the wires from the light and the nightlight, are they in the same box? So you are saying that both conduits pictured run directly to the box on the wall where the switch is, i.e. there were 7 wires in two bundles running from the box to fan?

The three wires you see on the new fan are black (hot), green (ground), and white (common neutral). You'd normally just take the corresponding white, black, and ground/green (often a bare copper wire) and connect them to your fan. The lack of grounding wires is a little concerning, especially if the fan has a metal body in a humid environment. Where is the fan at relative to the tub/shower? If it's directly over a water source it needs to be GFCI protected. Are there grounds in the rest of the house?

I'd suggest opening up the electrical box on the wall and inspecting the switch for the fan. If it just has one red and one white wire attached to the switch for the fan, then I'd bet that the two wire conduit with one black and one red is your man. Also check to see if the rest of the wires have a third wire for grounding. Check your instruction manual for the fan to see if it has to be grounded.

As for that other bundle of wires...the best suggestion I have is to figure out what they do by some simple checking. With those wires disconnected, turn on the breaker and see if other lights, outlets, or appliances don't work in the rest of the house, if that's the case they may have junctioned other wires at the exhuast fan, in which case you'll have to pigtail them with the fan's in order to keep the circuit complete. I've never see 5 neutrals and only one hot...I really wish you could remember how it was wired.

Best of luck, let us know what you find.

EDIT: OH! Pictures! So to clarify, it's 3 switches in one, right? So that means they used white for a hot??? Well if that's the case all bets are off I guess for correct wiring...

I'd say turn on the circuit, and using a tester, either no contact or a multimeter style, (be careful!) check to see which bundle of wires at the ceiling is hot with the bottom switch on or off.

Not the answer you're looking for? Browse other questions tagged electrical bathroom wiring fan or ask your own question.