How should stair treads and risers be assembled?

When assembling stair treads and risers, is it better to have the tread tucked under the riser or have the riser tucked in between the tread and the stringer riser backing? I am inclined to think the former because that way the tread gets more framing support but the way my current stairs are assembled is the latter, hence my uncertainty. 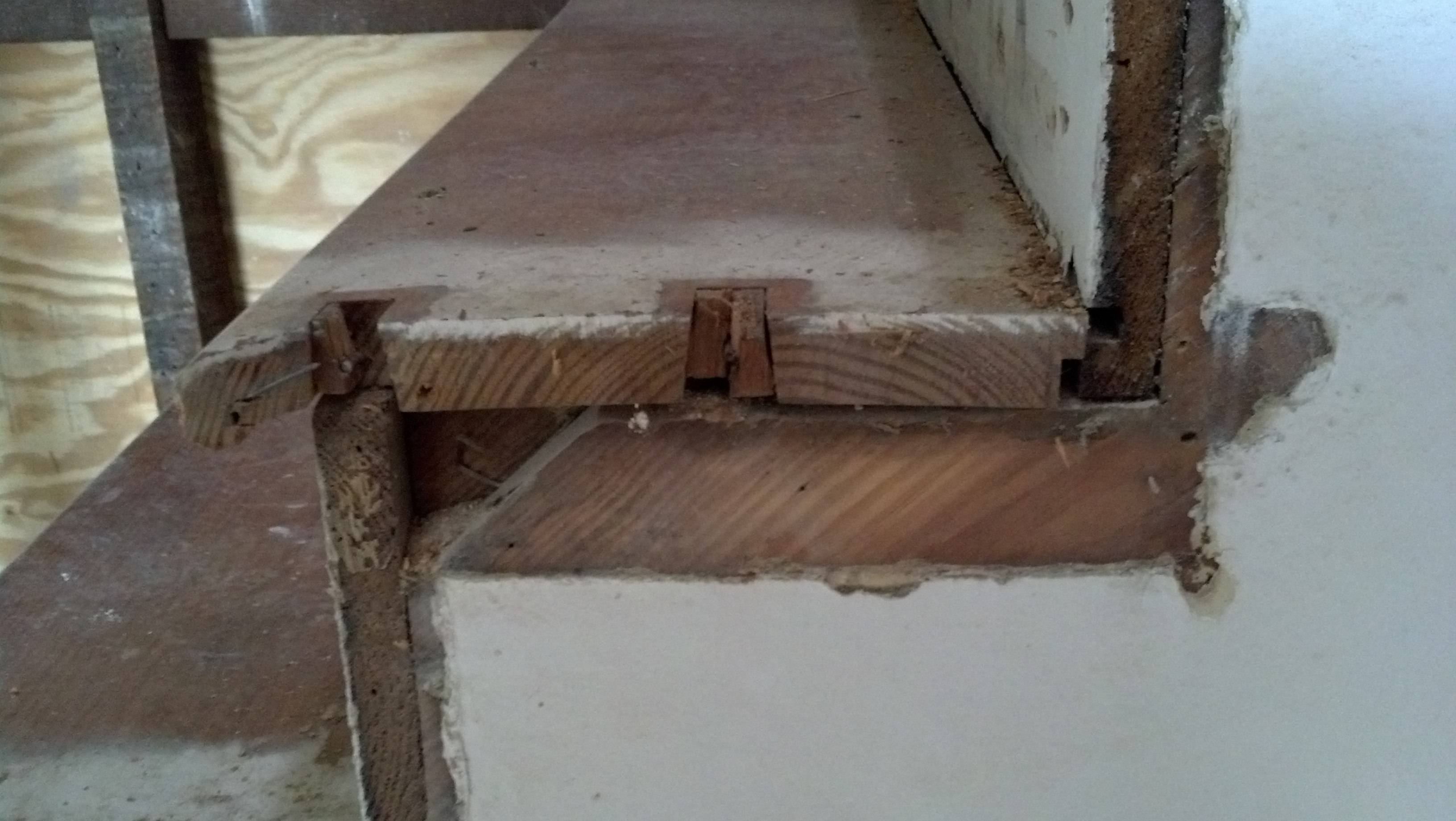 The answers of the tread then riser SEEM to make sense, but consider this: A properly installed tread will not come off before the lip breaks off. Using just regular Elmer's wood glue, I used to make treads by gluing the edges of 2 2x6 planks together and then planing and cutting them down (after being clamped for 24 hrs). After that, if I took a sledge to it the plank would never break at the glue joint, but somewhere else along the natural grain. So the stair tread flipping off is highly unlikely. What IS likely is that the overhang could be chipped or damaged and the tread may need to be replaced. If you go riser over tread then you will essentially lock the stairs together to where you cannot remove a single tread in the middle somewhere without tearing up a lot of the assembled stairs. Additionally, locking any wood assembly together completely isn't always good for expansion and contraction caused by potential seasonal humidity change. This isn't always a factor in certain natural climates and/or exceptionally well controlled climates, but if it can be, it should be considered.

To quote from "A Treatise on Stairbuilding and Handrailing" (Mowat, 1900):

Whenever possible each tread and riser should be jointed together, glued, nailed and blocked at the bench separately, and the glue allowed to set before the stairs are put together.

Some of the possible joints from the same work:

In general, mortised joints will be superior to a butt joint. I would expect having the tread below the riser would lead to a better distribution of weight. Two clamping arrangements are shown by Mowat:

Figure 41 is joint A above. A higher quality joint which is a variation on G is shown in Figure 42. The special fixture called a "cradle" is used to cramp the joint while it is setting; notice the use of wedges and pinions to make it tight.

I see a lot of places online that say to install the riser first and then install the tread (riser touching the stringers and tread in front of the riser), but I can't honestly think of a reason why it matters. Maybe someone else has a polarizing opinion, but I think either is fine.

Treads and risers install should start at the bottom step. First the riser and then the tread. However, on the tread you leave a 1/4 inch gap on the back edge and then install the next riser. Your riser should be at least 1/2" thick and the tread no less than 1" thick. This gives support to the back of the tread and the 1/4" gap allows for expansion.

If you install the tread first and then put in the riser, the riser will add stability to the tread by holding down the back of the tread; then it isn't just all on the nails and glue. This could theoretically matter if you had two adults step on the front of the same stair at the same time, especially if they are running down the stairs. Having the riser go first would make it so there is nothing at the back of the tread helping hold it down, and with enough force, physics states that the stair tread could basically "see-saw" on the top of the edge below it and the entire stair could come up.

Now, this shouldn't probably happen if enough nails and glue are used, but...

I'd rather make the weakest point be the actual nose of the tread (the nose would break off) rather than risk the entire stair coming up. At some point, no matter how well you install the stair, if you put enough weight on the front edge of the nose, something is going to give out. What you have to decide is what should give? Putting the riser on top of the tread at the back of the tread would probably make it so that rather than the whole tread flipping up, some part of the tread (presumably the nose) would simple break off instead. I guess it's kind of 6 of one, half dozen of the other at that point though, because either way you have a broken stair. The real question, to which I have no answer, is which design can hold more weight before it gives out. My gut says that putting the riser over the stair would hold more weight.

It comes down to flow. From top to bottom on any assembly you should build it so water flows downward and not inside the assembly. If the riser is installed first and the tread pushed up to it, any liquid, dirt or dust falls in between the tread and the riser. This could cause grief, and in the case of dirt be rather unsightly. With water the water flows under the tread. With all building assemblies there is the easy way, riser then tread, and the right way, tread then riser. The latter being more mathematical to assemble due to the mop and skirt boards. Always think of how water flows when building anything even if you believe water will never enter the picture.

I like the "water flow" answer above, because it makes sense. However, if you are retreading a staircase, the overtreads often have a lip below the front edge. This means that you MUST install the risers first. (Or remove the lip with a table saw)

Water flow over the tread which overhang these gaps you guys are talking about. If the tread happen to slope backward, no gap will prevent water from getting inside these gaps. Despite this fact, installing tread first then riser makes your life a whole lot better given that the tread is dead flat. Nevertheless, if you follow the max 1.5" max overhang, there's no possible way an average person or two can lift the tread up without the nose breaking first (doing the otherway). I've tried to do so myself even without he nail and glue in place. Anyhow, just make it look good.

5
Should I choose MDF or plywood for my false stair treads?
1
Converting closed stairs to open stairs
0
Stair riser templating when treads are already in
2
Converting closed tread stairs to open tread stairs
1
R302.7 Under-Stair Protection - does drywall need to be below stringers or just treads and risers?
1
Rebuilding interior stairs
3
Pulling treads and risers back into position in a housed / closed stringer staircase
0
SPF core stair treads
30
Is is safe to use LED strips that shine onto stair risers instead of directly onto treads?