How can I make an outlet switched?

I thought all I had to do to make an outlet switched was to break off the tab between the hot wires. Needless to say when I did that, the fan previously controlled by the switch quit working all together, as did other lights/outlets on the same circuit in another room. Is there something wrong with my wiring (or me)? Is this enough information?

No, just breaking the tab off is not enough. You need to have wiring specifically that goes from the switch to the outlet.

What likely happened is this: Most electricians will daisy-chain outlets, using one set of terminals for the feed, and one to go to the next outlet. By breaking off the tab, you removed power to everything downstream from that outlet.

Wiring for a switched outlet varies.

Sometimes there is a normal two-conductor wire that goes from the feed in the outlet to the switch (on black), and then the switch connects the two wires, and it comes back and goes to the top outlet (with the tab broken off). In this case the white wire should be colored red, or at least black to indicate it's hot. Red usually means switched. It's against code to leave a white wire carrying hot, but it does of course happen. 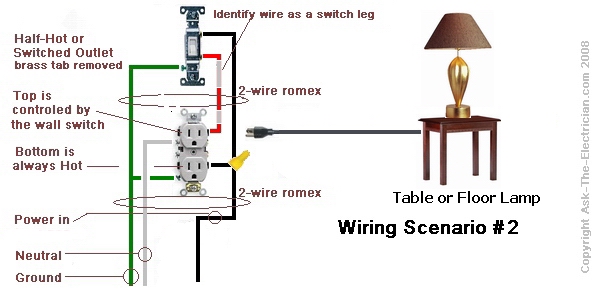 The other way it's often done is by having the feed come into the switch, then carried over a 3-conductor wire to the first (switched) outlet, where the red wire is switched and is connected to the top outlet, white carries neutral, and black is hot and is both connected on the bottom outlet and daisy-chained along to the rest. 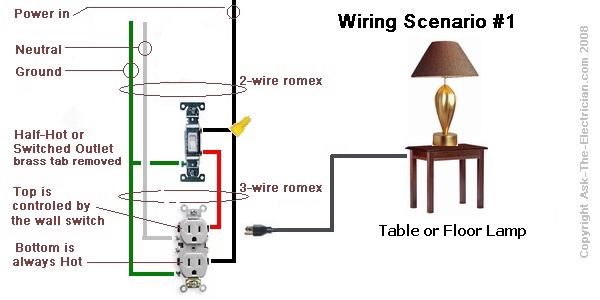 There's other variations as well, though generally the power will be on the same circuit (breaker) - otherwise any fixture on it must have a clear indication that it is powered by two sources, and honestly I've never seen this done in a residential setting before (not even sure if residential code allows it).

So in short, you can't make a switched outlet unless the outlet is explicitly wired that way.

(Note: I prefer, and usually see -- at least in Canada -- the bottom outlet switched, but these diagrams show it as top switched, so I left my description that way)

2
Change half switched outlet
4
2 circuits connected in one box?
0
Want to change a half switched outlet to constant power
1
Converting switched receptacle to overhead light
0
Outlet appears to be switched but switches don't work
4
Use one 14-3 cable in place of two parallel 14-2 cable
1
how do i make a light switch turn on a lamp plugged into receptacle
1
Switch no longer controls outlet
1
Convert switched nightlight+outlet to non-switched outlet