How can I stop a barbed coupler from leaking?

This seems to be a common issue (drip line barbed couplers leaking) and I can't find any answers about this online. I'm wondering how others have fixed leaks in the fittings that are supposed to just work by popping them into the polyurethane tubing.

It's a pretty basic setup, but I'll describe how it's laid out in my particular case:

I'm installing a simple drip irrigation system for our garden using Rain Bird products. The 1/2" poly line runs from our outdoor spigot about 30' then is terminated at the end by folding it over clamping it at the end with a zip tie.

Near the end of that main line (maybe 8' from the end) a barbed coupler is inserted, with the other end going into about 10' of 1/8" soaker hose that is terminated by a goof plug.

The hole where the barbed coupler fits into the poly tube is leaking (and by leaking I mean spraying water about 12-16" into the air). It isn't positioned at a weird angle, the hole isn't too big, and I did push in the coupler all the way until it "snapped" into place. The coupler sits perpendicularly to the tubing. I've done this before, with some tiny leaks (just some drips), but never such a big leak. I've tried adjusting the position by pulling on the tube or tilting it at various angles, but the water just leaks out of different places.

Could it be because it's the only line coming off the main poly tube? I'm planning on adding several more soaker lines to hit the rest of our garden areas, which will no doubt distribute some of the pressure.

Does anybody have any tricks to sealing barbed coupler fittings so they don't leak?

The barbed coupler I'm talking about looks like this (am I using the wrong part?):

gardening irrigation
Share
Improve this question
edited May 28 '13 at 12:00

When drip irrigation connectors leak, it is usually because the hole that was punched into the 1/2" hose is too large. This can happen when you try to re-punch the hole because the 1st punch did not go all the through and you can't get your connector into the line. When you try to re-punch a hole it's extremely hard to get the punch in exactly the same spot. Since you are off a tiny bit you actually end up with 2 holes, the one you put the connector into and right next to it a tiny hole that sprays out extra water. I've tried plugging the hole with the large end of the drip irrigation plug and sometimes that will stop the leak. When it does, then I just punch a new hole and try again. When it doesn't, then I use a silicone based glue to put around my connector. I get the type of glue that is good for fish tanks; I figure if it won't kill my fish then it won't contaminate my food.

That looks like a very flimsy coupling, as it barely has anything to hang on to. Better to use a regular PVC barbed coupling, which looks like this:

Usually you use a stainless steel clamp around the connections: 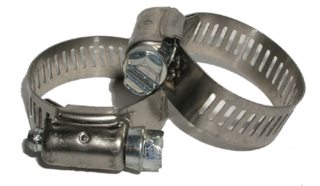 With bigger/thicker pipe, you sometimes need to heat the pipe using a torch slightly -- just get it a bit pliable so you can get the fitting in, but not "melty". 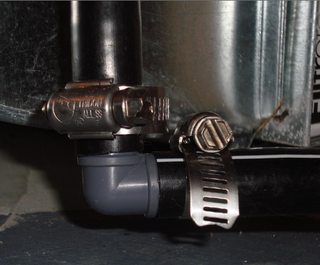 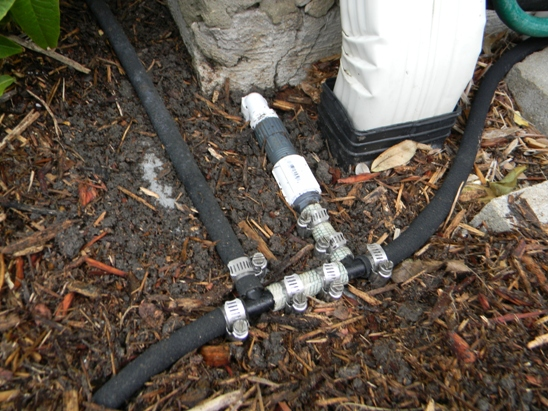 Since you don't mention it, you have probably left out the pressure regulator. The pressure tolerance of drip systems is pretty low. Ideally they like to run around 25-30 PSI. Most homes have 50 PSI or more. In my case, it's 120 PSI.

You should also consider getting a filter at the same time you get the pressure regulator.

I just stumbled upon this question because I had the same issue. This was one of the first google hits. Super old thread, but no satisfactory answer for me.

The roundness of those plastic barbs is assumed, but definitely not justifiably so. The result is a round, or elliptical hole, and a round or elliptical barb. I found by simply twisting the barb in the hole (clockwise or counter. Your milage may vary.) I was able to reduce my leak to almost nothing. I tried counterclockwise 45* and it leaked twice as bad, so I went back 90*, and bam! sealed it right up. Give it a try before you try punching a new hole, or buying some glue. K.I.S.S.

I have to take down my deck drip system each Fall and reinstall it each Spring. In the Fall I just coil it all up and store it away.

In the Spring when I reinstall it, it always leaks at the junctures between the 1/2" and 1/4" tubing. It's never a jet of water - simply a continuous leak. I find that if I twist the 1/4" barb several times in its hole in the 1/2" line the leak goes away. It also seems to depend sometimes on whether the tab on the barb is inline with or perpendicular to the 1/2" tube; inline seems to work best.

I've begun pre-drilling with a 1/16 bit as the 1/2" hose collapses when I try to punch the barb through it. Be gentle as you don't want the drilling to go through both sides of the 1/2" hose.

I use an Awl to make holes but be careful of not going through the other side of the tube. I use the same connector as mentioned initially and I have never had a leak. You definitely want to use a 30psi regulator.

Not the answer you're looking for? Browse other questions tagged gardening irrigation or ask your own question.

2
How high of a structure can I build for growing hops
2
How can I fix a leaking sprinkler valve?
0
How can I prevent water buildup in a pit for a trampoline?
0
How to keep bird away from leaving their droppings on the deck
0
how can I remove broken spigot from garden hose end?
0
Can I remove and replace barbed connector in 1/2" drip tube?
0
Rooftop garden irrigation: Some plumbing questions
0
Irrigation Zone Off When Should Be On, On When Should Be Off
2
How do you recommend connecting polyethylene tubing to soaker hose?