What is this old 1/16" thick floor-covering, and how do I remove it? 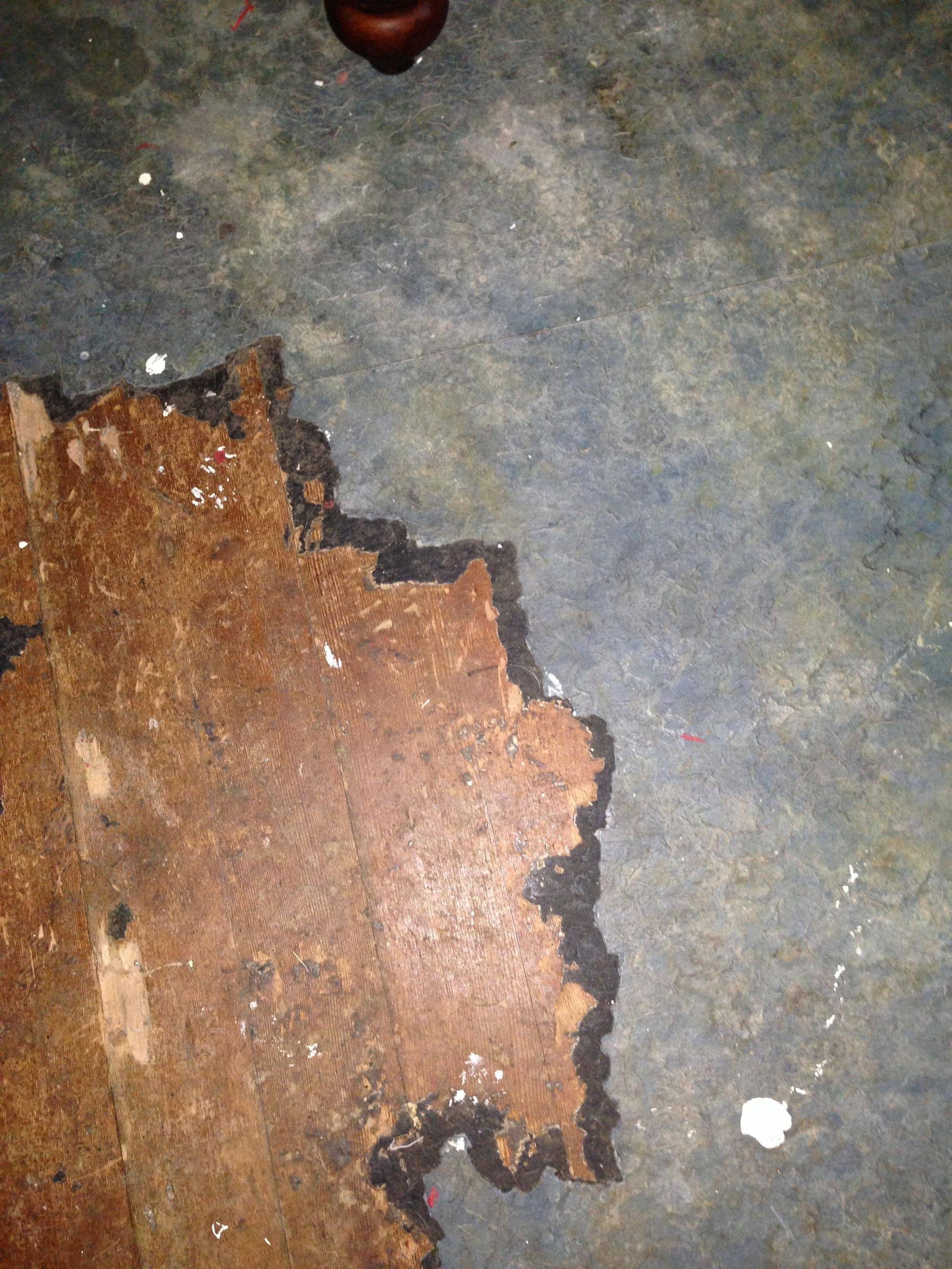 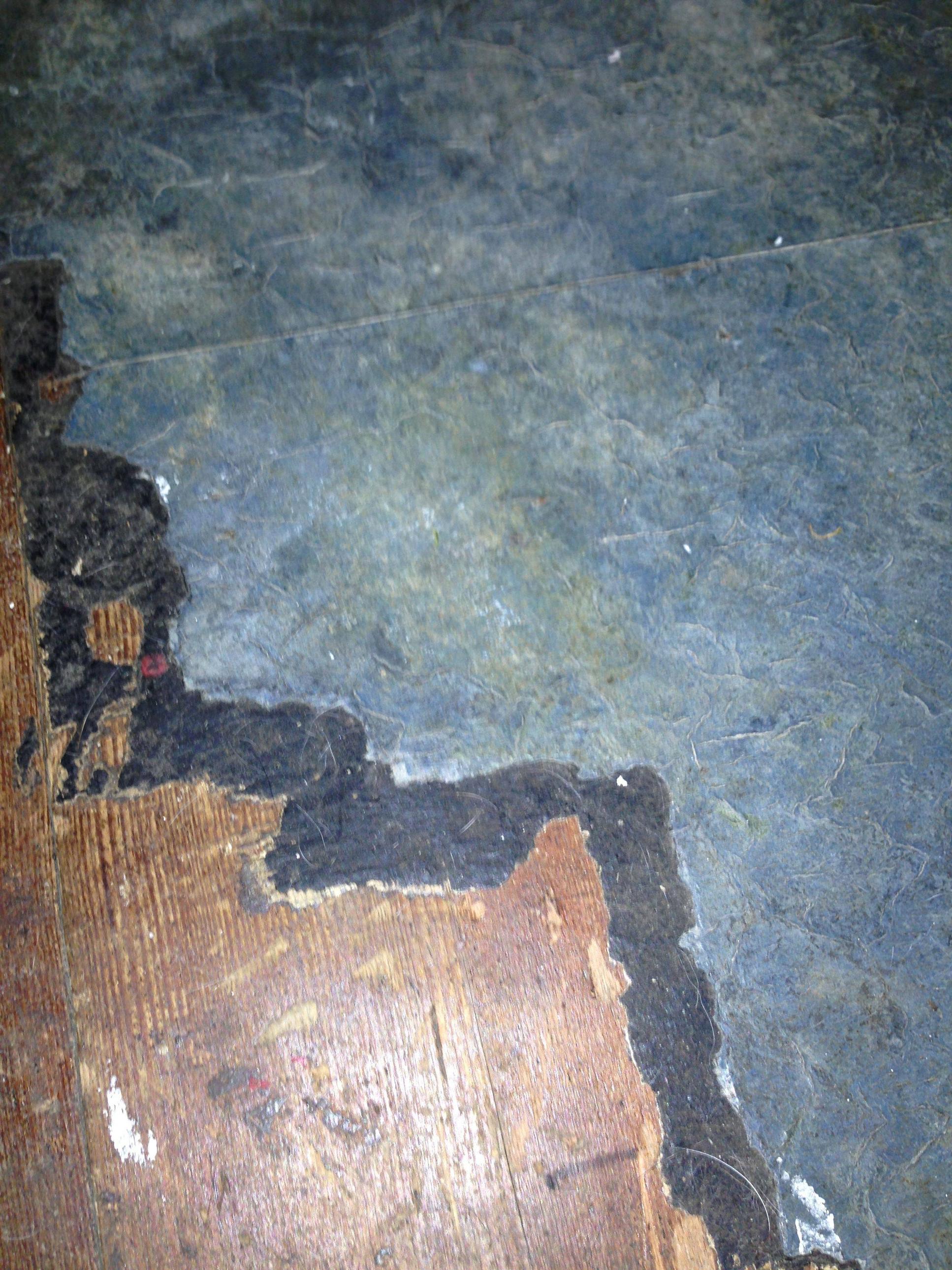 We recently pulled up the carpet in our bedroom, and found this gray covering over the wood subfloor, which seems to be adhered to the wood with a black adhesive (some previous owner scraped away a small portion of the gray/black stuff off the wood, but it covers most of the floor). We are going to install new hardwood in this room, and we were told that we should remove the gray covering due to moisture getting trapped there.

First, any idea of what this might be, and what kind of adhesive? The house is older (built in 1928), but we don't have any idea when it was installed or what it is. It doesn't seem to feel quite like linoleum, and it's not that thick, maybe 1/16 of an inch. It appears to have stained with water spots in places.

Second, how should we go about removing it? Given the age of the house, I assume that it is likely that this substance contains asbestos; is there a safe way to remove it? Or, if it is too risky or too difficult to remove, is it possible to install hardwood flooring over this?

Like I said, some previous owner did try removing some of it, but only removed maybe 10 square feet, and may have given up after that. The lines around the removed spot are rough and jagged, looking like pulling up that portion wasn't easy.

hardwood-floor subfloor asbestos
Share
Improve this question
edited May 18 '13 at 20:11

Unless you have your heart set on using the wood floor under the old sheet goods I would cover it. As you suggest it may contain asbestos. I would use floor leveling compound, available at home centers to fill in the low spots where the old surface was removed. Then you can cover the entire floor with what ever material is suitable underlayment for your woodfloor be it floating,prefinished or solid wood.

You could use a power scraper. They can usually be rented. 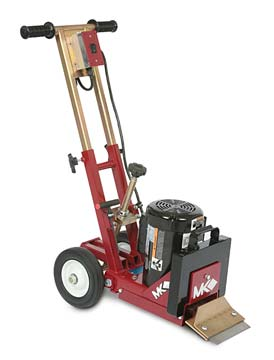 We had a similar problem with out floor. It was the 9pm at night. The floor sanding company was coming the next morning and had asked us to remove the old linoleum. I was scraping it and chipping at it and it wasn't coming off. In the end we decided to try the wallpaper steamer.

From memory we took off as much as we could of the top layer and them steamed it and scraped it. What happens is that it softens the glue and allows you to lift it out in big sheets without much effort. We had it fully removed in under an hour. It was a great relief!

Not the answer you're looking for? Browse other questions tagged hardwood-floor subfloor asbestos or ask your own question.

10
How can I remove a portion of a hardwood floor board?
2
Should I replace carpet over ancient linoleum that might contain asbestos?
2
How can I remove residual adhesive that may contain asbestos from wood?
0
Can I use self leveling compound to level old thin set over plywood subfloor?
1
What is the best way to trim edges off of hardwood floor where wall was removed?
2
What is this layer of material in the kitchen floor?