Why does wand shower head drain at unusual times?

We recently moved from using a stationary shower head to a new version that has a wand. While I love the new one we have noticed that the wand shower head will release water at random times.

For example, in the middle of the night up to 15 hours after being used maybe 1-2 cups of water will drain from the shower head. It's not the most fun to hear when sleeping. It will also sometimes drain after a toilet flush.

Once the water is released it will not happen until after the shower is used again. I would expect the draining immediately after a shower but the odd hours/times are the frustrating part. 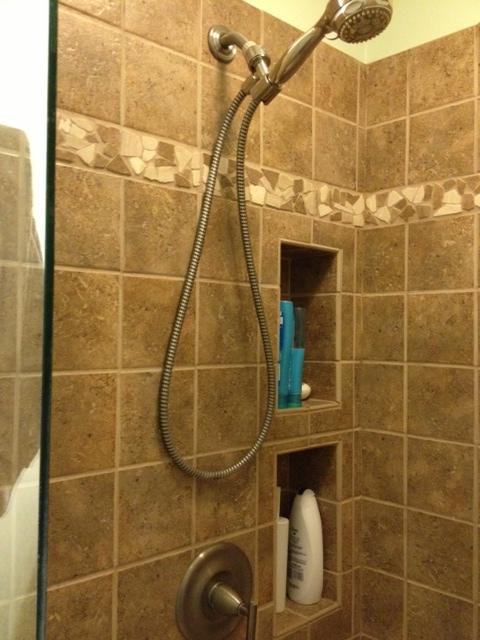 Are there any steps that I can take to resolve this?

There are a few ways you can improve the situation but there isn't a true fix.

If I had to guess, it's draining some of the water that was still caught up in the shower head after you turned it off (and held there by atmospheric pressure). After enough of the remaining water has evaporated/etc to break the seal, the rest of the water comes out. We have a similar problem with our shower head (a flat "rain" shower head on an articulated arm). In our case the problem is depends on the position of the head and arm...oddly enough it happens when the head is not horizontal. All the other details are the same as yours (it never happened with the old head, no lower faucet, etc).

In our case it's not draining 1-2 cups since it sure sounds like it at 3AM in the morning and scared my wife on many occasions :-). You could verify the amount of drainage by putting a pan or something in the shower...if yours is indeed draining 1-2 cups it may not be the same issue unless it's somehow siphoning water out of the hose.

Just loosen the head and shake the hose after a shower. You will sleep fine. If you want a fix that will last, change the massage settings to one with bigger holes in it so it will drain. It is like a straw -- if you hold the top it will hold the water, but when you remove your finger the water drains.

Another tip is to install a valve to release it after each use. It's fairly easy to install.

1
Why does water surge out of the shower head after being turned off?

7
Why are there bubbles in my bathroom toilet and sink?
2
Snake drain gun vs compressed gas drain gun vs liquid - which is better for what?
0
Plumbing issue throughout house - gurgling coming from shower, bubbling in toilet, standing water in drain of shower
2
Does snaking a shower drain resolve a leak?
1
Shower pump humming when taps opened, but no flow
2
Toilet and shower will not drain
1
Why does my water pressure / flow rate drop sporadically?
1
Basement shower not draining; dirty water now seeping back up drain
1
Slow drain after tub-to-shower conversion
1
Toilet on septic system won't flush after heavy rain