Is it possible to vent two exhaust fans through a single wall penetration?

I have two bathroom exhaust fans that need to be vented out of the house, but I'd like to do it using a single wall penetration. Is there a code compliant, safe way to do this?

I don't know about code compliance. But, this might work for you:

1 Y-Connector at the outside vent. 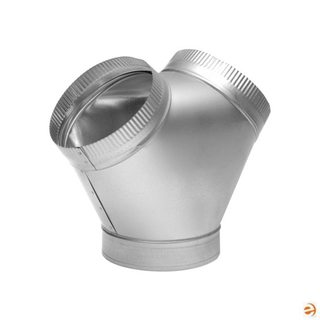 2 Backdraft Dampers (one on each leg) at the Y to stop the backflow of noxious gases from one fan(on) to the other (off). 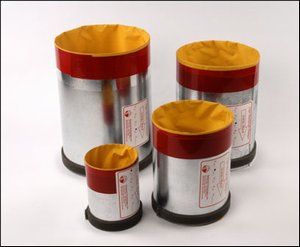 Note that the backdraft dampers will add to the resistance of the duct work. You may wish to move up to the next size of duct.

I did this setup and would NOT recommend it. I have an 80cfm panasonic in a small bathroom and a 110cfm older fan in my main bathroom. I used the same dampers shown above, the cloth ones. Plus each fan has its own damper built into the housing. The run is only perhaps 6ft total and I ran two 4" into a 6". When both fans are running at the same time (both taking a shower) the smaller fan gets totally overwhelmed and cannot move enough air. I'm thinking about changing the setup so both run out the side with their own wall vent.

You could run both vent ducts to the same area and then install two vent caps side-by side. Your wall opening would have to be twice as big, but at least you would only have to do one cut, flashing, etc.

None of the above solutions going to work.

Folks, this is THE ONLY WAY. No other solutions exist nor work.

My suggestion is to use a mechanical damper such as ALDES. These dampers open with a very low pressure drop. I have always achieved good success using two to three Fantech fans installed in the attic (very quiet, and the ceiling plenum box operates under a slight vacuum) with the ALDES dampers vented out a 6" roof vent. They fit snugly inside the galvanized duct just after the fan. They are truly Cadillac dampers. The fabric dampers have not held up for me. The plastic dampers that come with ceiling mounted bath fans or those on Fantech fans just do not prevent air backflow well enough to tie multiple fans together.

Base on my air flow measurements the ALDES dampers has reduced the airflow only about 10%.

One last recommendation is DO NOT vent bathroom vents through a soffit. And do not buy a home that has bath vents in the soffits.

Not the answer you're looking for? Browse other questions tagged exhaust-fan exhaust-vent or ask your own question.

2
Shower in one bathroom causing moisture in the second

2
Bathroom vent pipe going down instead of up? Is it OK?
2
How can I vent my bathroom through a ground floor vertical-slider privacy window?
17
Exhaust fumes seeping into our 4th floor apartment at night through bathroom and shower vents/fans
3
Seperating bathroom light and exhaust fan on single switch
4
Bathroom in-wall exhaust fan with dimmer?
3
Possible source of dripping from bathroom exhaust fan?
1
Re-purpose old water heater vent for bathroom exhaust fans
0
Two countdown timers connected to one inline fan — Does it work?