What is the use for this different threading near the head of a large screw?

I'm inquiring about the strange threading at the base of this screw:

These were used in somewhat heavy-duty outdoor construction. What is the purpose of that corkscrew, and is it safe to replace it with a similarly sized regular woodscrew?

I inquired about it in two stores, and neither could tell me the purpose.

My intuition is that the quarter inch of steeply pitched fluting is designed to ream out the passage in the outer member being joined, or at least ream out the outer 3/4" of 'hole'. Conceivably, this might reduce friction when driving in the screw over the final 3/4" ... or it could be a gimmick.

Here is a related patent http://www.freepatentsonline.com/7832173.pdf that claims in page 7 of the PDF that the purpose is to increase the screw's resistance to lateral displacement by mashing the fibers that will be next to the un-threaded shank. 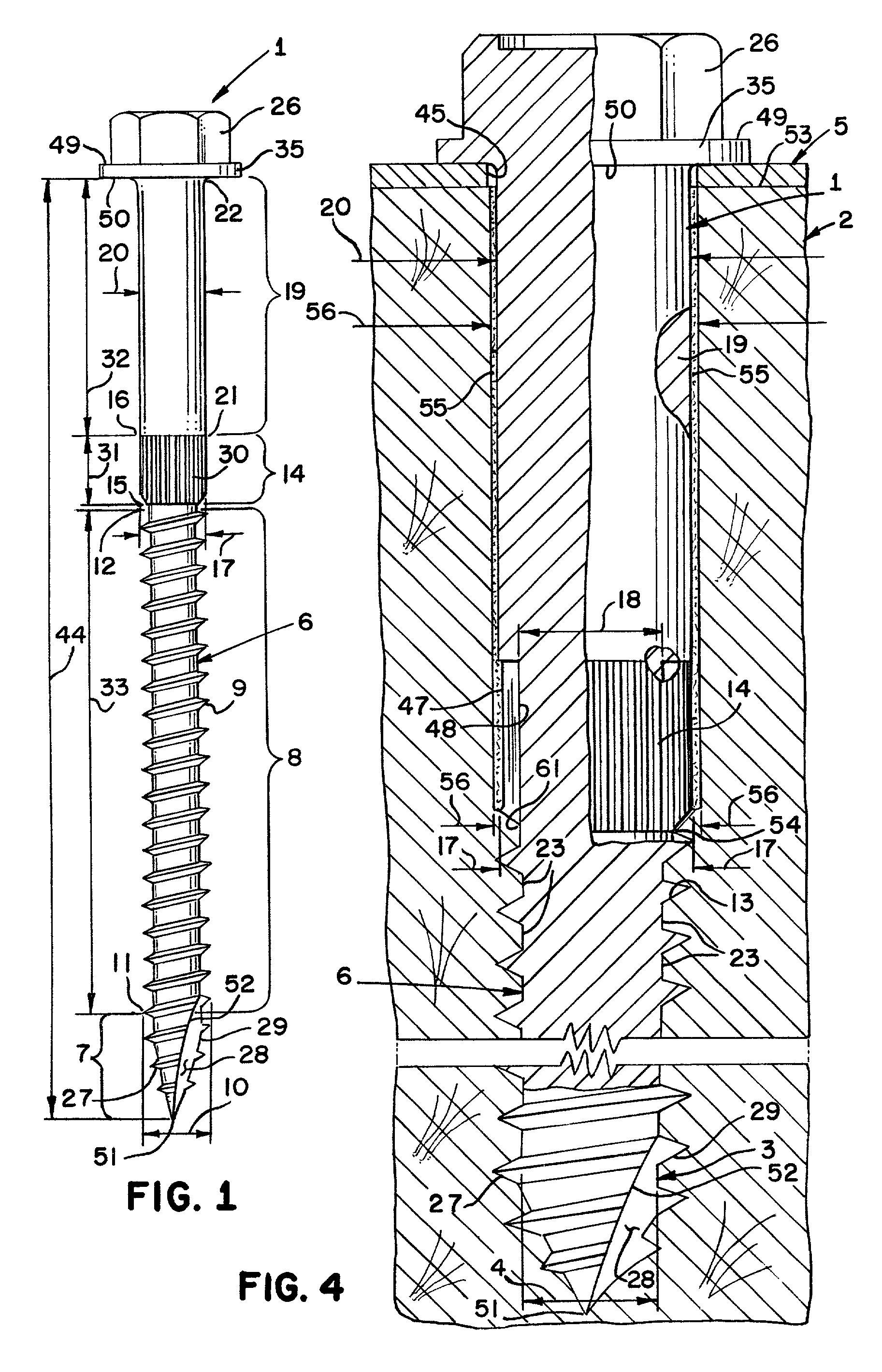 And as for the ribs on the underside of the screw head, here is a related patent http://www.freepatentsonline.com/EP2546533A1.pdf that claims in paragraph [0005] that the objective is to lower the lower resistance when the screw is being locked into a wood piece for enabling the screw to carry out locking smoothly and quickly. Note that the patent discusses various kinds of ribs, including the ones pictured in the OP. 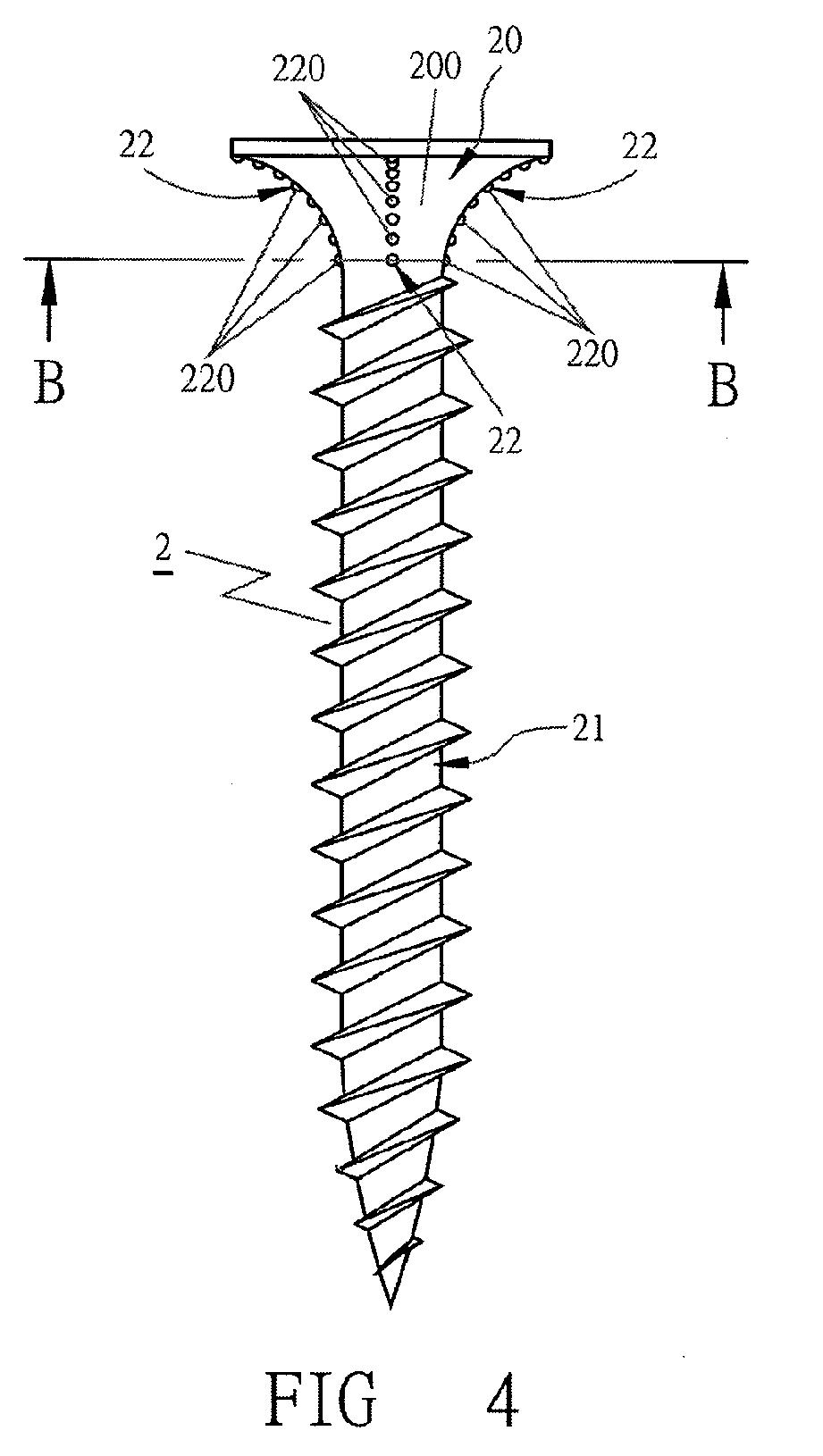 And here is a patent http://www.freepatentsonline.com/2070851.pdf for preventing screws from backing out, whic is different from nail shanks which may be fluted (and ribbed) to prevent backing out

And not last and not least, the McCoy:

1) Knurled shoulder reams hole in board being fastened, reducing drag on shank and driving too.

And last but not least, the Hatfield

The CEE thread is designed to enlarge the hole in the uppermost of two pieces being joined so that they’ll be more tightly pulled together. 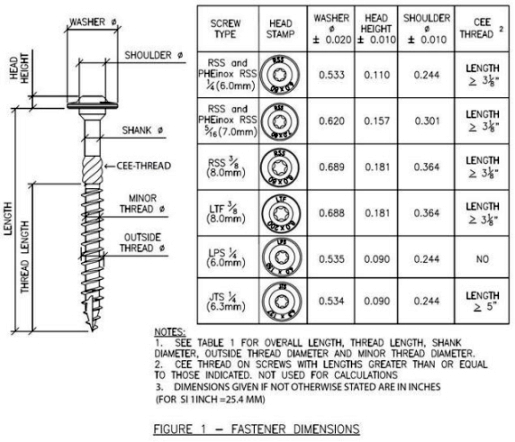 RSS™ screws which are 3"1/8 and longer have a six threaded CEE thread that enlarges the screw hole for the non-threaded portion of the fastener, allowing the wood to settle easily and increasing the screw’s drawing strength. The CEE thread also reduces the likelihood of splitting the wood and the friction on the screw shank which can result in lowering the driving torque.

And to over do it, here is yet another patent, but this time referring to them as 'milling ribs' ... 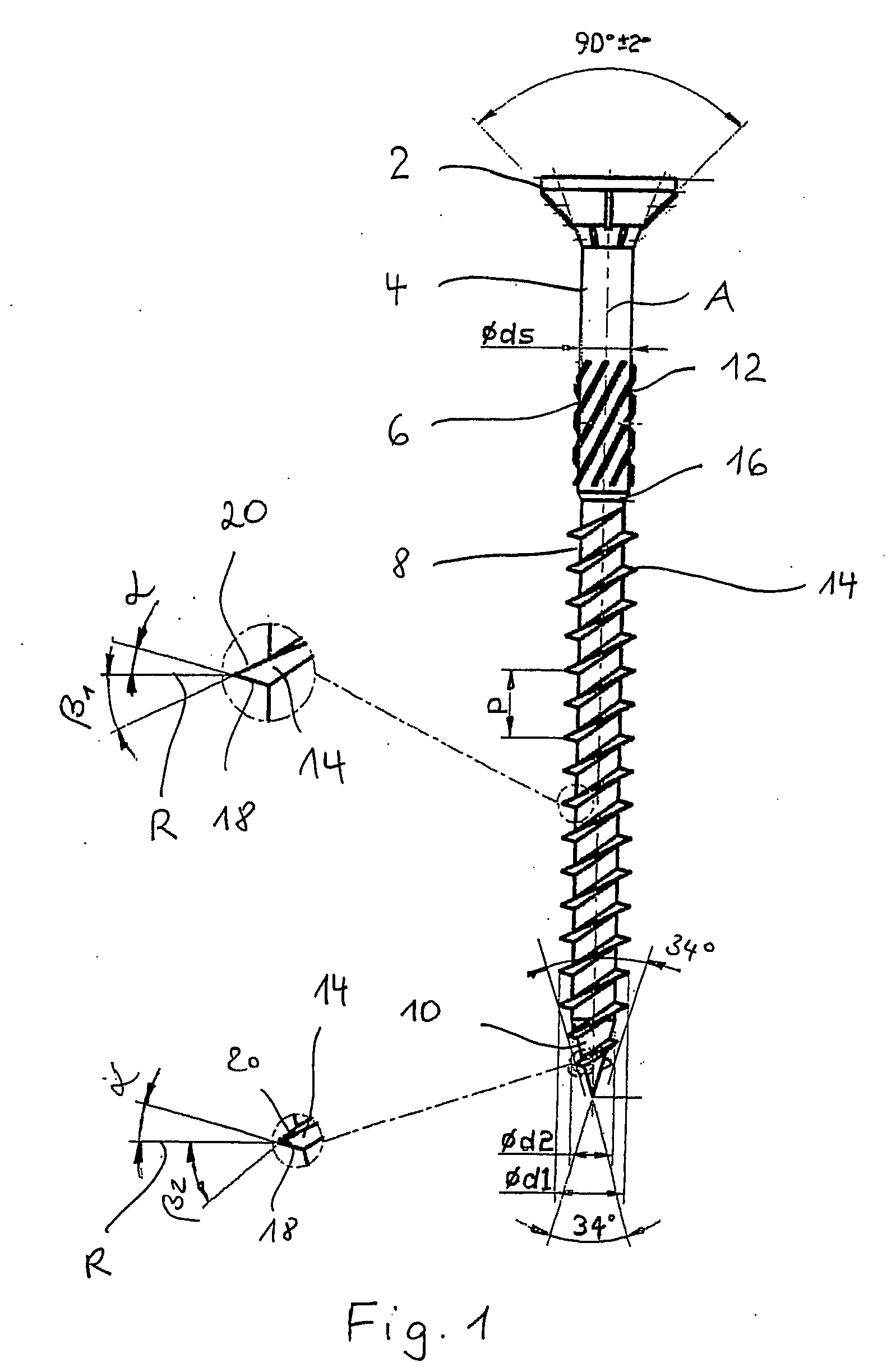 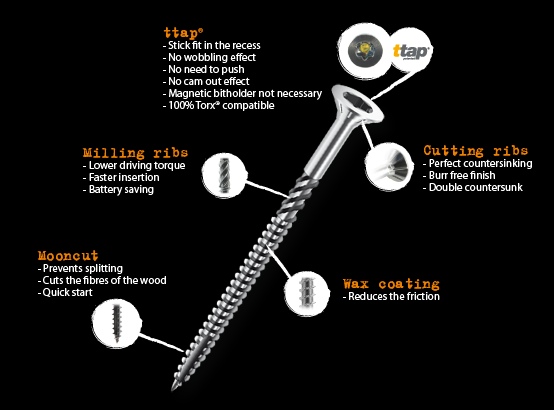 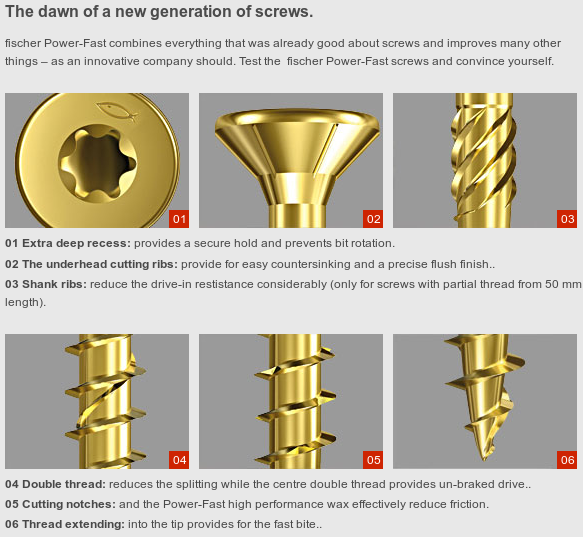 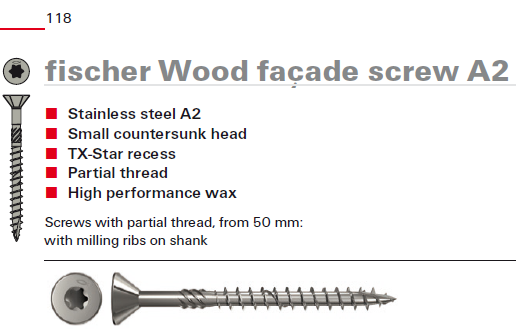 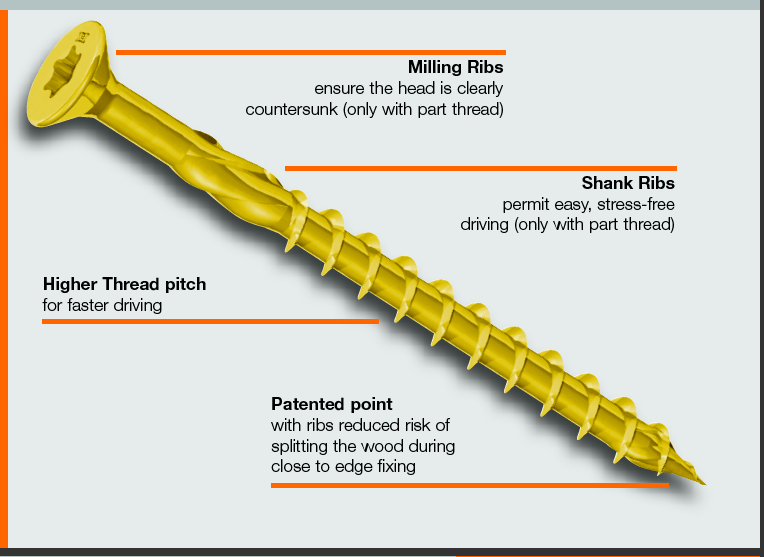 I'd imagine the ribs do ream the hole, which does reduce the friction on the unthreaded shank. But the reaming action will require energy, particularly so because the shank-ribs are reaming by virtue of damaging the wood fibres, as opposed to cutting them. The question is, which eats more energy: the reaming or the friction? The benefit would be the net drop (if any) in the required energy. It's actually much worse than that. Assuming a net drop, how much is the savings compared to the total energy needed to drive the screw? 1% ? 2% ? I think the savings, if any, would be miniscule. The shank-ribs could actually eat up more energy in net, particularly when the unthreaded portion is short, meaning 2" or less.

As for drawing the two pieces together more tightly. Bogus. Actually, counter productive. The screw draws the two pieces by gripping the outer piece while advancing into the other piece. It doesn't matter how it grips the outer piece. The obvious grip is by pressure undeneath the screw head. But the friction on the unthreaded portion of the shank also grips the outer piece similar to the grip of a nail of a similar diameter. With shank-ribbed screws, the grip on the outer piece no longer includes the friction on the unthreaded shank. With the shank-ribs, the grip will be limited to the force of the screw's head, and that, due to the reaming caused by the shank-ribs, will be diminished as well.

The section of threading just below the head is used to help a screw be self-countersinking.

For your application, you can use either shanked (screws where the threads stop) or fully threaded, as long as a clearance hole is used.

The technique is used with soft materials that will "mushroom" without being predrilled and countersinked ( The worst are composite deck boards, MDF boards and melamine laminate boards, but all wood joints benefit from having clearance/pilot holes). 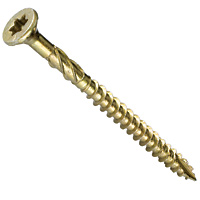 I was taught it is to help prevent it from backing out over time due to vibrations and such. There is no reasonable argument that you couldn't replace them with similar sized regular woodscrews.

In addition to what is mentioned in the other answers, the reverse threading portion of these screws will also help pull the two materials together.

e.g. If you have ever tried to screw two boards together (without pre-drilling), you'll notice that when the screw leaves the first board and enters the second board you will get a gap between the two boards as it takes a moment for the screw to start a hole in the second board.

When you get to the point where the reverse thread starts it will draw the boards together and close the gap.