Can I screw a ceiling fan electrical box directly to the joist?

I am putting in a ceiling fan in a bedroom. It is a smaller one approx. 18 lbs.

The remodeling-type expander brace failed, so can I just screw one side of the box to the joist? (I cannot access the area through the attic.)

Well I know I can, but how bad would it be, really? Is there a type of box that is more suited for this purpose?

Check the markings on different electrical boxes. According to the National Electrical Code (NEC) (which is not applicable in all areas, so check local codes), boxes that support ceiling fans should be listed for the purpose.

A box like this 4 in. Octagon Box, is rated to hold 50lbs, however, that's only when it's properly installed. Since it sounds like you don't have much room to work, you'll probably have difficulty installing it properly. 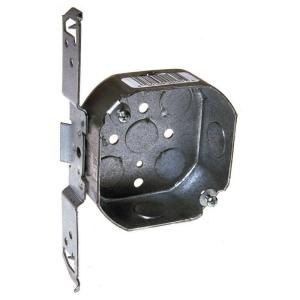 You're obviously not going to want to use a box like this Ceiling Box, which only attaches to the drywall. 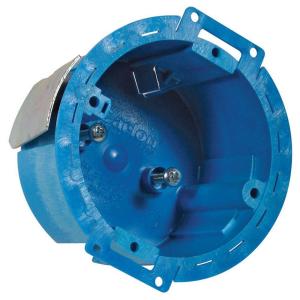 The best choice in this situation is a box supported by a brace.

I'm not sure what you meant when you said "The remodeling-type expander brace failed", but not all braces are created equal so it may be worth a second try. With this Westinghouse Saf-T-Brace (and others), installation is fairly easy even when you're working through a small 4" hole.

It would amount to a pretty poor installation. Box walls are not very rigid, it doesn't take much force to make it flex. You are essentially cantilevering a mass of hardware off a flimsy piece of sheet metal. No fan is perfectly balanced, they all have at least a slight wobble. With a solid base, this would usually be invisible. A flimsy installation could amplify the effect so it appears worse than it is.

The old work brace that failed is the usual solution for this situation. Another solution is to remove a square of the ceiling and install a proper solid brace, then repair the opening. Depending on the ceiling finish this can be fairly straight forward or completely impossible. Yet another option is to install a piece of MDF on the ceiling surface that spans the joists. The edges and corners can have nice details cut into them so that once painted, the piece becomes a halfway decent decorative element.

Finally, you could apply a pancake box directly centered under a joist, but then you have to patch the old hole. If you can do that, the make a bigger hole and install a proper brace option is also realistic.