How do I deal with a joist in the way of where I need to run a pipe?

I'm in the process of installing central vac lines (2" OD) in a finished house, and I am trying to run a line into the upstairs hallway. I have removed drywall in the garage below and drilled a hole down using an installer's bit, and found the hallway wall is sitting directly over top of a joist. 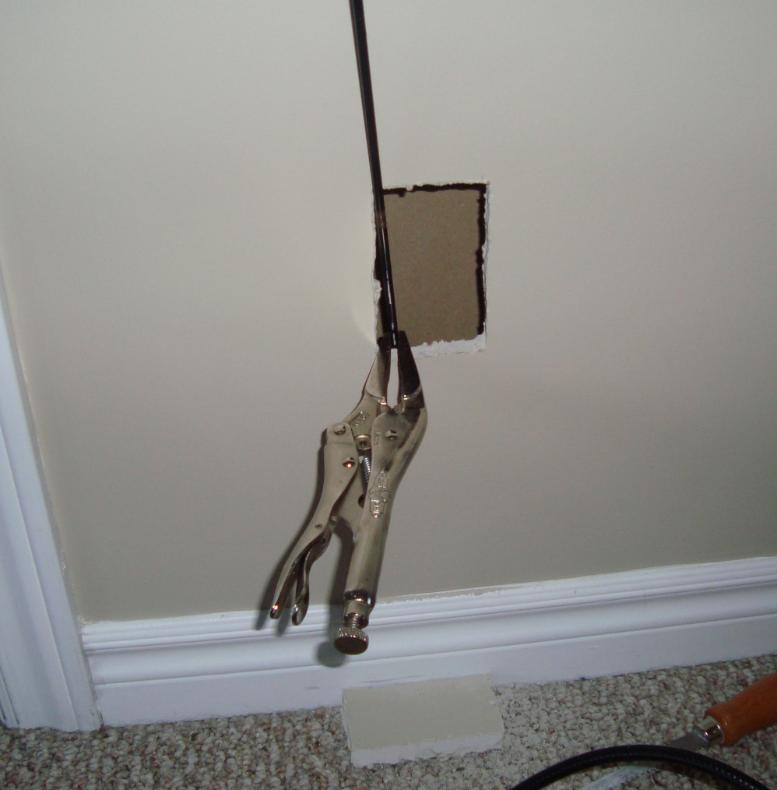 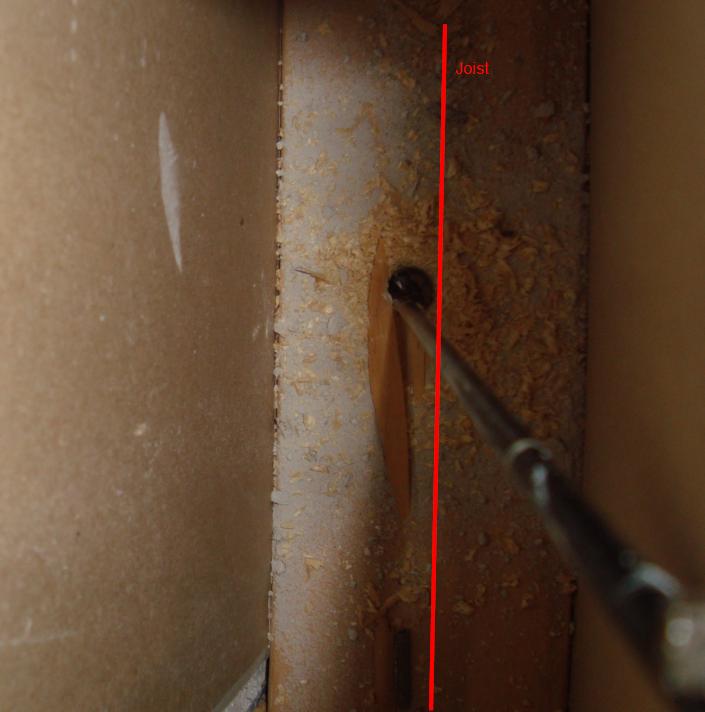 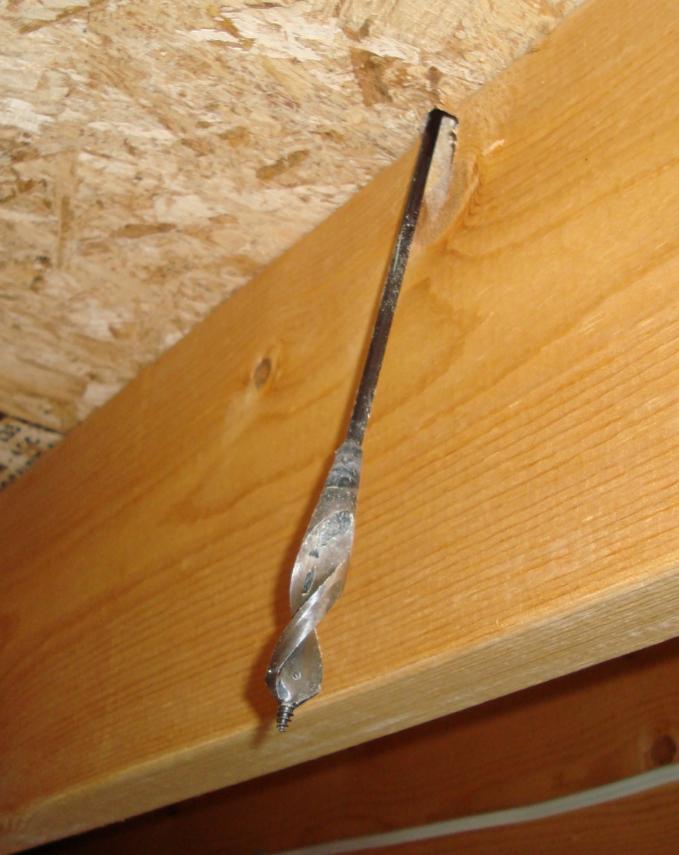 This is an ideal location as it is the only spot that allows me to reach every upstairs room. Any further and I have to open up walls on inside spaces, which I want to avoid.

There's a not-as-ideal alternative on a nearby adjacent wall (about 3' away) that would allow me to come down between joists, but the hose only reaches halfway into one of the bathrooms, so I'd prefer the original location if possible.

Is there a safe way to make this work? The challenge is that I will have to drill through a bit more of the joist to fit the 2" pipe in (as I already inadvertently did..). 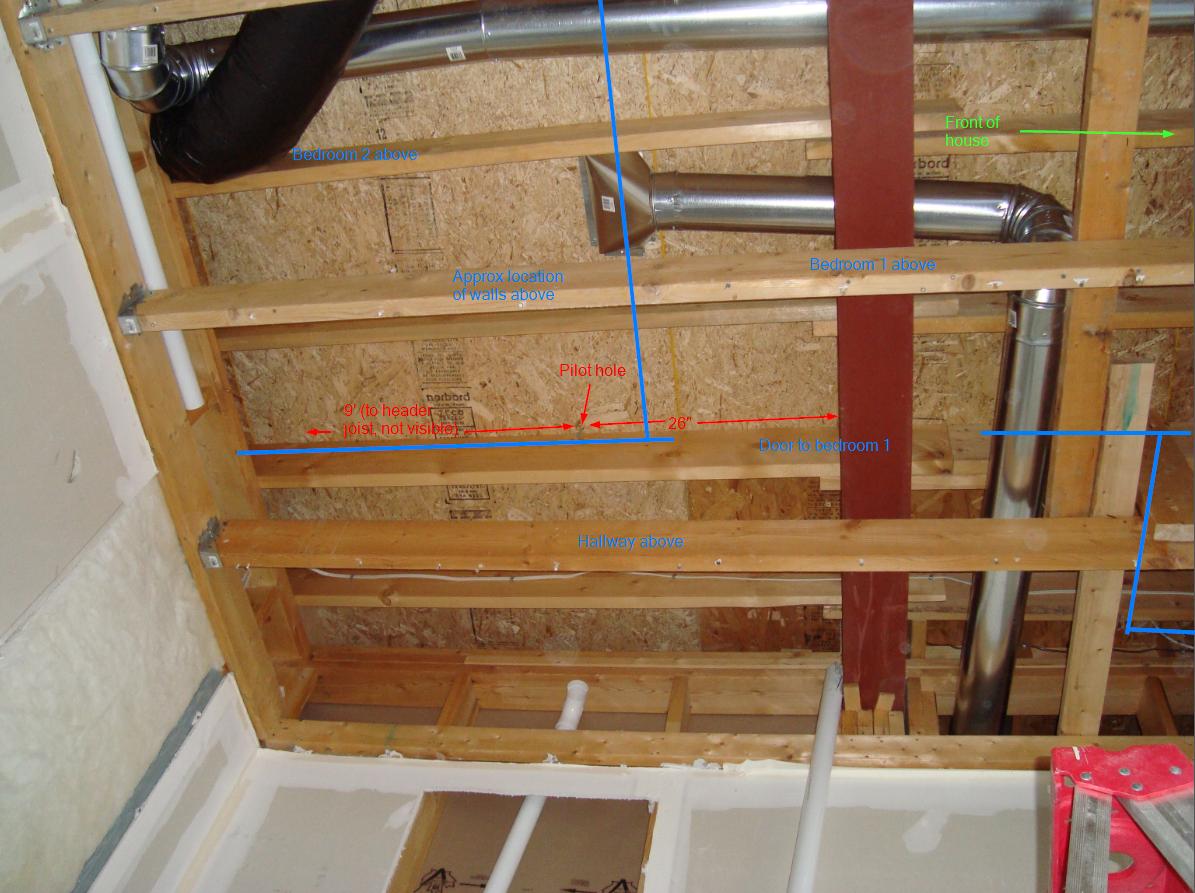 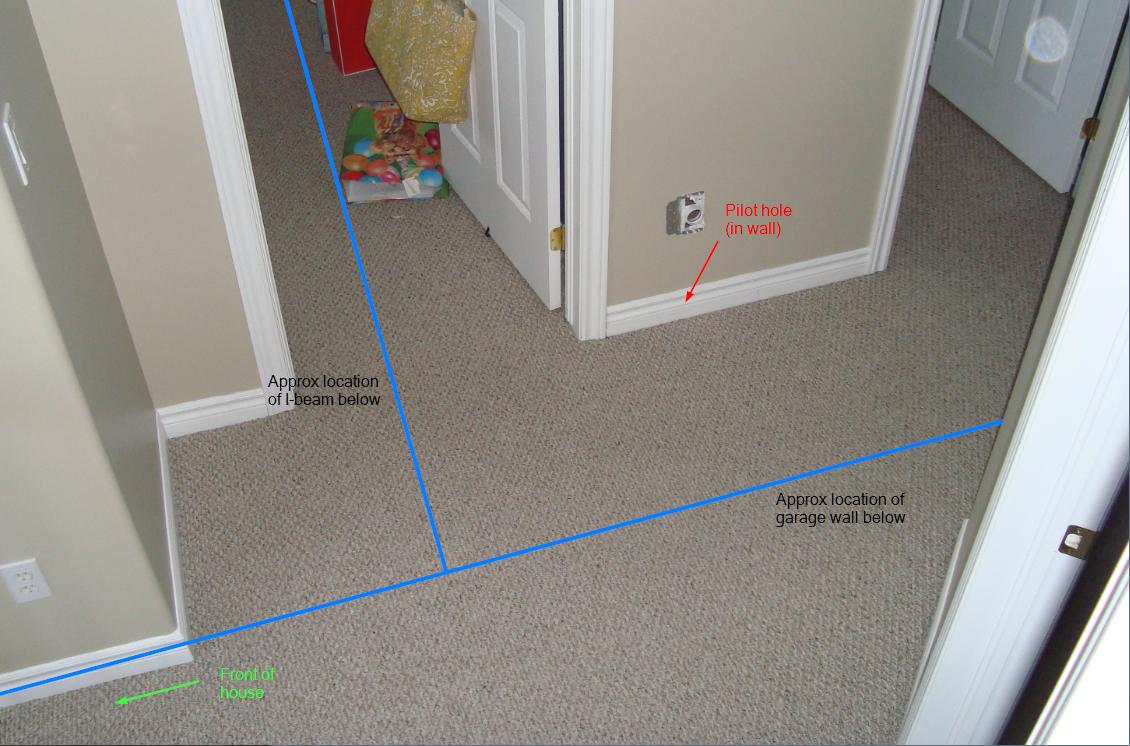 I drilled a second pilot hole right at the edge of the bottom plate, and decided I had enough room to come in on an angle with a 2" hole saw. The "notch" on the 2x8 isn't any deeper than 1/4", you can actually still see the original pilot hole where I came through the joist (the groove nearest the camera). I'll need to use some flex pipe to hook this up because of the angle, but that is no big deal. 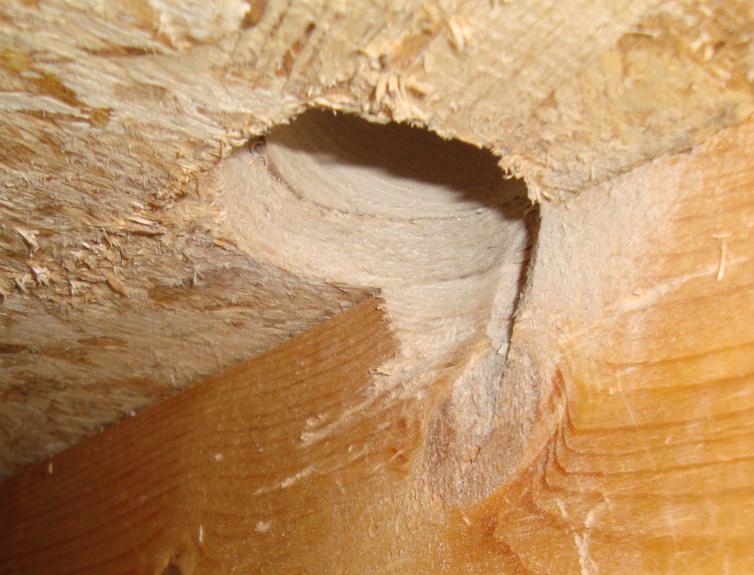 Do I still need to sister another 2x8 to this? How significantly is this really affecting the strength of the joist?

Got it done, using 2" ID flex pipe (typically used to hook up those under-cabinet vacuum sweep inlets). Thanks everyone. 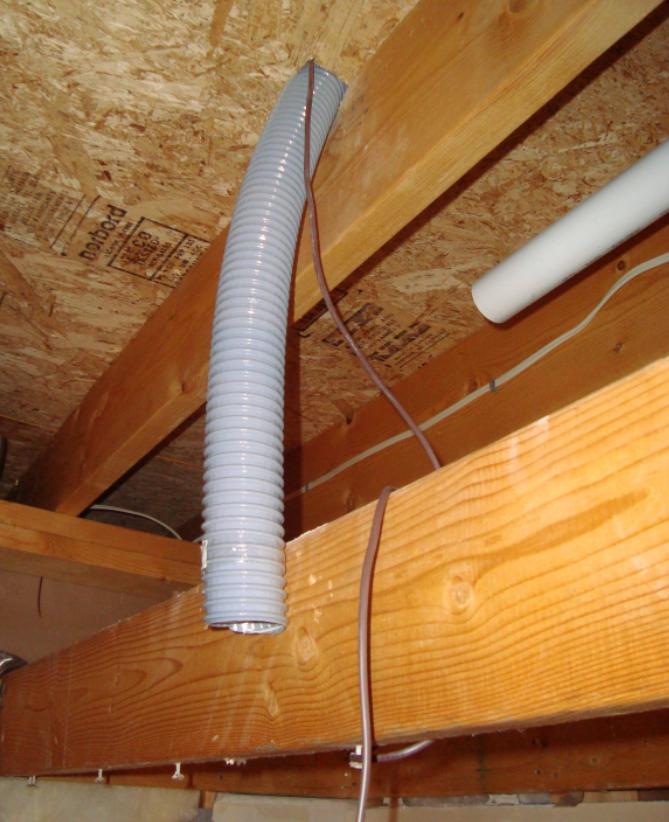 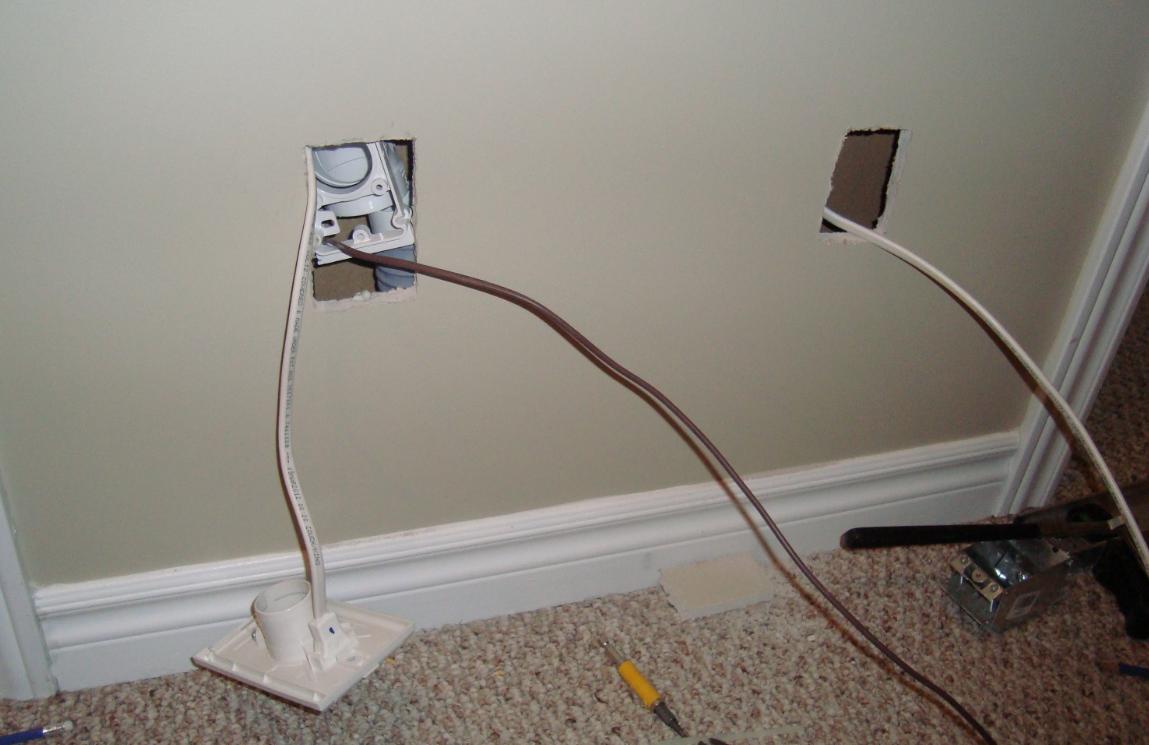 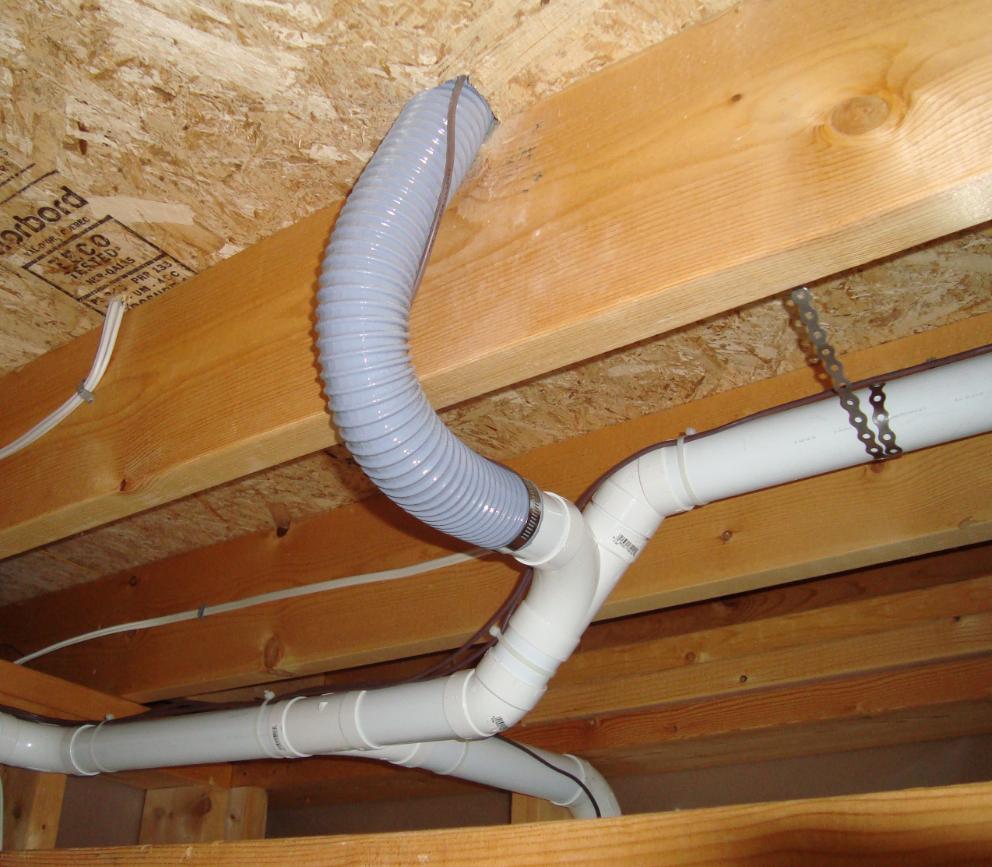 My answer is to cut your two inch hole as close to your drywall as possible. In the picture you went right down the middle and barely hit the joist. Methinks that you could drill right along the side and have to barely notch out the joist below. Might not even have to notch all the way through it. No reason for vac lines to have to be centered in your wall. Use the notch guidelines I found to help further.

Below is a helpful chart that provides actual notch and hole size limitations for 2x4, 2x6, 2x8, 2x10 and 2x12 joists. It should be noted that limitations on the allowable notching and boring of wood joist are meant to retain the structural and functional integrity of the member.

In a nutshell, there is really nothing to worry about ... provided ...

B) the joist is not carrying a huge amount of cantilevered weight (out to the left in the photo).

Given the new picture showing it is approximately a 4ft span, it'll be really easy.

2) Use a large pair of vise-grips to pull any newly exposed nails through the subflooring.

4) Install the vacuum pipe and fittings and wall receptacle at this point, before sistering on a new joist.

5) Cut a new two-by joist about 48" long to reach from the lap-joint near the I-beam to the wall support. It should cut long enough to loosely butt at the lap joint and also sit on top of the double top-plate of the wall for 2"-6".

7) Dry fit the new joist. Trim some if necessary so as to make it easy to maneuver the joist into place.

8) If the vacuum pipe is keeping the new joist from laying flat against the obstructing joist, you can cut some lengths of 1x2" or 3/4" plywood to place in between the two joists.

9) Optionally apply some construction adhesive (I would not)

EDIT 2013-05-06 Morning: Good to know they are indeed parallel. As a work around, perhaps the mfr/vendor sells a flexible coupling for situations like this, or perhaps a length of 2" ID thick-walled vinyl hose would work, or a length cut from a shop-vac hose of fortuitous diameter. In any case, it would involve cutting an oval passage through the subfloor and the hallway wall's bottom plate by cutting two 'overlapping' holes, perhaps 1-1/2" dia, and 'cleaning up the sides of the oval with a sawzall or keyhole saw or chisel.

This flex-splice approach may or may not be feasible. Being a work-around, like the notch+elbow method, there is a good chance that something unforeseen will come up that will prevent completion ... so I still favor a direct approach, such as sister+section or sister+chisel described below.

If you do choose the notch+elbow method, I'd suggest a 45 rather than a 90. Also, when laying out the location of the hole, I'd take into account the OD of the female ends of any nearby fittings such as the elbow to the wall receptacle. With the notch+elbow approach you might encounter nails under the bottom plate that were used to nail the subfloor onto the top of the floor joists.

Regardless of approach, I'd reach into the cavity of the hallway wall with a putty knife to probe between the drywall and the bottom plate to check for drywall screws that the hole-saw would encounter.

If the hallway wall is indeed running parallel to the floor joists, then I'm surprised that the joist underneath the hallway way is not doubled up. But then maybe the hallway wall is just a few feet long, or maybe it's actually an extra joist. I first would confirm the orientation by drilling a second pilot hole.

Assuming they are parallel, my inclination would be to first add an auxiliary joist on the non-problematic side, then use a sawzall with a long blade to cut out a complete section of obstructing joist (say 8" wide) to make room for the 2" OD pipe. Some additional wide angle photos would help give a sense if this would be a feasible solution. If it is feasible, then depending on various aspects, I might cut out the 8" section first because it would be easier. Another approach would be add the auxiliary joist, then drill the pipe hole from above from inside the hallway wall through the hallway wall's bottom plate, then on a step ladder in the garage, use a sharp 1-1/2" to 2" wide chisel to chisel out an adequate trough down the face of the obstructing joist.

The process of adding an auxiliary joist (which, by the way, does not need to run the full length of the existing joist) is called sistering. With a skill saw, cut new two-by to length, then rip about 1/2" off it's width over the full length. Dry-fit the auxiliary joist, apply construction adhesive, clamp in place, screw together with 3-1/2" sheet rock or deck screws, pre-drilling on the insertion side so that the screws will draw together the 2 two-bys. The 2 two-bys will total about 3" in thickness. Use 3-1/2" screws and angle them for a superior and clean looking job. If you are really good with a hammer, you could clamp and nail the two joists together with 16d bright common, but I'd use 16d galvy commons for their extra grip. A pneumatic nail gun won't draw together the 2 two-bys.

If I was working alone, I'd screw or nail a couple lengths of one-by on the bottom side of the joists and perpendicular to the joists to hold the auxiliary joist in place once I lifted it up into place and applied the clamps. I'd let the one-bys protrude about 3" beyond the obstructing joist into the bay that is going to receive the auxiliary joist. I'd use three clamps, one on either end to hold the joist in place, and one to keep close to where I was screwing.

I'd be happy to go into more details. If I understand it correctly, the joist-photo is taken from inside your garage, looking up at the floor joists. If you could take and post a couple more photos, it would be helpful, in particular:

1) A wide-angle photo shot from the level of the garage floor looking directly up at the proposed location. This one should show as much of the joist layout as possible.

2) Photos of the 'other side' of the obstructing joist that show any potential issues with sistering an auxiliary joist on that side.

3) Photos that show how the obstructing joist is supported.

It would also be helpful to know the length and width of the obstructing joist.

Do you have unobstructed access all the way to the supports at the end of the adjacent joist bays? If so, you could slide in 2 new full-length joists. You might have to open up the ceiling at the other end to install joist hangers.

With 2 new joists in place you could notch your existing joist as big as you need.

Overkill, I realize. But sometimes overkill is the simplest solution.

In you picture of the drywall, there appears to be a door to the left. What's on the other side of that wall? Is is a closet? Cut a hole through the wall in to the closet and run you vac line down through the floor. Build a plywood or drywall box around it.

Not the answer you're looking for? Browse other questions tagged joists structural central-vacuum or ask your own question.

14
How do I improve Pergola Stability?
1
Can my floor support Kitchen Island?
1
Is it allowed to have a small hole bored in a joist in the area where it is bearing on a beam or joist hanger
6
Can I cut a hole in a 2“ x 8” joist that is less than 1/3 the height of the joist, leaves at least 2“ above and below the hole, but is 10” wide?
4
Running wire to ceiling with double joist parallel to wall
2
Repairing Hole Drilled Vertically in Joist
3
Running wire through sole plate and joist at an angle
1
Sistering a split joist not code?
7
Repairing a notched floor joist
4
Is there a simple way to make these rough sawn, exposed joists level and flat?