What tool should I use for carving deep shapes in a desk top?

I am starting a DIY project to create a standing desk. Part of this project involves installing some electronics in the wooden desktop itself. I need to make the following cuts / carvings and am wondering the best tool to use:

I am hoping there is a handheld power tool that can help me accomplish this. I don't need perfect cuts; a hand-made imperfect aesthetic would be just fine.

wood woodworking desk
Share
Improve this question
edited May 2 '13 at 18:58

The tool you are looking for is a Router: 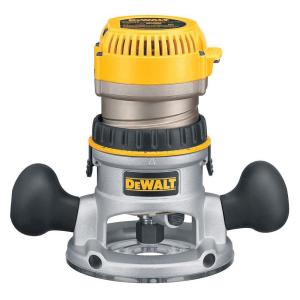 If going the manual route, chisels would do the job too:

I agree with Steven that a router is the way to go. However, I think it important to point out a few things to consider if you use a router for the project you described, especially if you have never used a router before.

First off, you shouldn't try to cut the full depth of the pockets you describe in a single pass. You will need to make several passes, taking out a little bit at a time. The amount you should take per pass depends on the material but I would start with 1/4" or less. The less you take the easier it will be to control the router.

Second, let's consider for a moment that the base of the router pictured above is about 5" diameter. You need to keep about half the base (at least) pressed against the surface to maintain control of the router. How will you route the center section after the first pass if your hole is 10" square? The answer is you need to make a larger base, one that will span both edges of your hole. Most routers are made so the base can be removed so you can make and attach a custom one for instances such as this.

Third, generally you should move a router against the rotation of the cutter in order to prevent the cutter from grabbing. If you are using the router handheld and working on the inside this means you should be working in a clockwise spiral around the inside of the pocket you are cutting.

Finally, it is always easier to control the router if you are working against a guide surface. A template router bit has a bearing above the cutter which you can ride against either a template or at least a straight edge. I think it is the right cutter for this job. Even if you don't make a complete template you can clamp a straight edge to the each edge of the pocket in succession to establish the outside edges.

I would use a router. I am currently doing a similar cut out. You really need to keep the router resting flat on a template or temp base as you cut out the middle to maintain the flat cut. I have done 3 passes so far and it is working well just going deeper by 1/4" or so each time. If you are new to routing the router could catch and skip out or cut into the side if you are not slow and steady with it. Take your time and rest your back also. It's a tedious cut but so nice when complete. Good luck!

Not the answer you're looking for? Browse other questions tagged wood woodworking desk or ask your own question.

5
What material can I use for this custom corner desk?
8
How can I repeatedly cut the same pattern using a router?
2
What tools should I use for hand carving and whittling?
3
What to use to finish my desk from IKEA?
8
Should I use MDF, plywood, or something else when building a desk?
2
How to make a straight groove easily?
0
What kind of Extruded Aluminum sections to replace main wooden frame on this DIY project?
2
Which varnish to choose for a first time job (desk)?
0
What Support/Legs would i need for a 2m Solid Oak Computer Desk?