How would I ground an internal ethernet surge protector?

I have a Cat-6 cable running to an external PoE security camera that I'd like to have surge protected, but I'm unsure how to ground the protector. It has a prong coming off that I assume is the ground wire, but I don't know where to connect this. Is there an adapter to connect it to a close-by outlet and use that as ground? I feel that the location of the surge protector (indoors, about 8 feet high) is too far to try to attach it to an outdoor "to earth" pole. 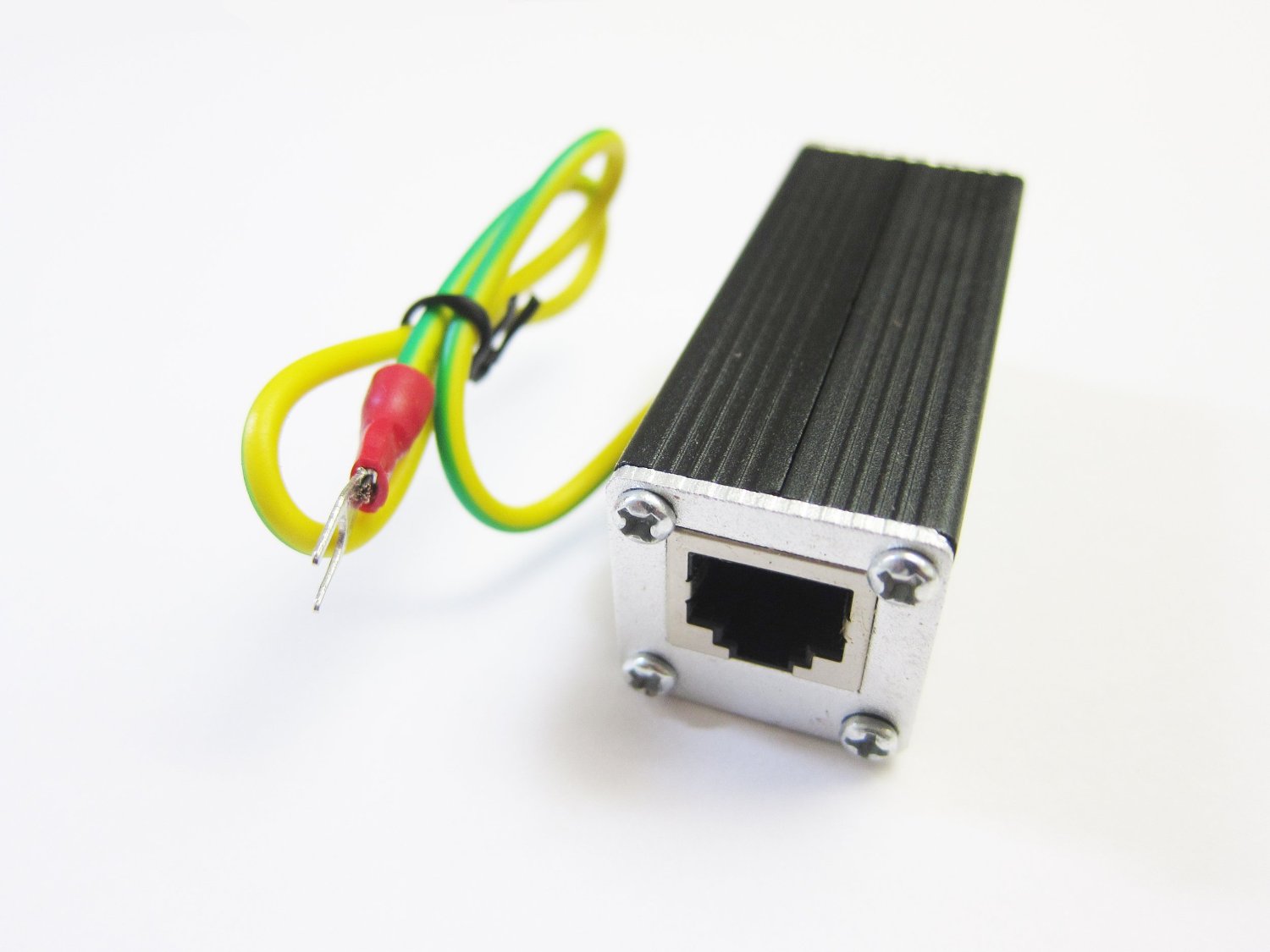 Here is a link to the surge protector I'll be using.

data-wiring grounding cabling
Share
Improve this question
edited May 1, 2013 at 3:27

It's like the old three wire to two wire plug adapters that had the grounding wire. That attaches to the screw on the outlet cover. You may want to get new screw that is bare metal and not coated to make better contact.

There's a couple of ways to ground out that protector, but first, make sure the shielding of the cabling is properly connected between both ends. Also, keep in mind that the surge protector can be anywhere in between the network and camera, so on a wall, or post, or overhang is a good place for it.

First as Norman has stated, you can use a standard wall outlet to hook the ground wire to. Might want to check the outlet with an outlet tester before connecting the surge protector. No sense using an outlet that isn't properly grounded. If the shielding for the cable is proper, then you could hook the protector right next to your switch/router/network. Could be bad if the camera is hit by lightning as the electricity would have a direct path into the building and close to the network. Grounds can only handle so much electricity before they melt/burn up/disintegrate.

The second (and IMHO better option) is to simply hammer a very long copper bar several feet into the actual ground and attach the protector to that, if you're able to. Then make sure the shielding on the cable going from the network to the protector is bad, or use an unshielded cable. The cable from the camera to the protector should have good shielding. While yes, this may be a bit paranoid, my philosophy is, why risk it? If the ground is too dry when lightning hits, it may not properly send all of the electricity into the ground, which could lead to damage. There's also no indicators on that protector to tell if it's fully functional or not.

The protector should be secured to whatever your grounding it to, so a screw and nut to hold it firmly in place is best, (soldering it to the ground is also viable, but replacing it will be more difficult). If it's going to be outside, make sure that you protect the connection from the elements, cover it in silicon, wrap waterproof tape around it, use shrink wrap, build an enclosure around it, or even a combination of those.

If it is UTP CAT6 then you don't need a ground. If it isn't then you ground it like you would any other electrical component. Might just run a piece of 14 gauge wire over to an electrical box and tie it in there.

Not the answer you're looking for? Browse other questions tagged data-wiring grounding cabling or ask your own question.

6
Can I obtain grounding from a different outlet?
1
Will I have to install new cables when converting from a SD CCTV system to HD?
8
How to add a gfci and surge protector to pool pump line?
2
Converting a Samsung Dryer from a 4-prong cord to a 3-prong cord?
2
How to ground a junction box extension when using a non-metallic box?
0
GFCI Grounding Issue
1
Can I run a ground wire from a cheater plug to another 3-prong outlet to ground it?
8
My PoE adapter has a separate grounding wire - how do I wire it?