How can I add insulation to my roof?

I have an old 1930's house, the upstairs of which is in the pitched roof space.

I've just checked and it has no insulation what-so-ever up there, so it is very much the same temperature as a loft at the moment - The layout is like so: 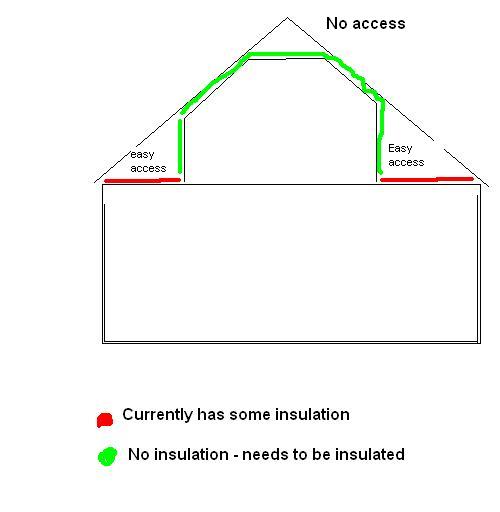 (Apologies for the bad drawing - only have MS Paint here!)

So the red areas have some rockwall insulation, which will be easy to top up as there's good access to the eaves. However there's no loft hatch into the top "triangle" of the roof.

The green areas have no insulation at all, so we would like to add some. We've had a quote for a company to remove all the roof tiles and battens, put insulation in between the rafters, put new felt on (there's no felt either at the moment), reinstall the battens and replace the tiles.

The rafters are only 100mm thick so we can only put 50mm of PIR type insulation between them to maintain a 50mm air gap correct? I've read that by using a breathable felt you can use a full 100mm of insulation but unsure of this?

Is there a cheaper way to do this? As re-roofing is an expensive option, but I can't see any way to get insulation effectively between the rafters on the diagonal sections.

I don't know if something like this foil double insulation would be as effective as the PIR insulation and able to be run down the diagonals if we were to install a loft hatch to get into the top triangle?

BTW, I'm based in the UK so that may alter any options.

If adding insulation to the outside (roof) is prohibitively expensive, then the alternative is to add it to the inside. Tear out the sheetrock, fur out the joists, and add our insulation there and re-sheetrock.

I had an old farm house once with a similar situation. This publication from the University of Alaska-Fairbanks proved very helpful, and it applies to cathedral ceilings as well.

In summary a roof needs to be either well insulated, with no air gaps against the underside of it (fiberglass insulation right up next to the decking), or it needs good airflow. In an attic, you can mix this, as long as all the areas of the roof is well ventilated underneath or well insulated.

This advice also coincided with advice from a roofing person/company in the area that had a very good reputation for decades.

What about pumped insulation. They have flaked rockwool which is pumped through small access holes. This will not provide you with the best insulation, but you could improve your situation quite easily. 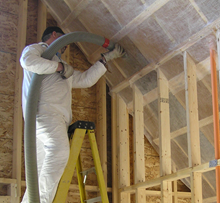 If there really is a decent amount of room where your green lines are I would think it could be spray foamed. You just need an extender on the sprayer to get up into the bigger area and get the rest on the way down. I am assuming you could get a hose through that area though.

The option I'm looking at doing is to put 50 mm urethane insulation like Celotex. Then a 20 mm air gap, then Multi Layer Foil Insulation SF 40. This should get the U value down to 0.18. I have not done this yet, it's just what I've got planned out. I'm only worried about vapor barrier before the urethane.

1
What kind of insulation should we put under new tin roof?
4
Is it better to fill up the space between rafters with insulation, or put baffles on top and add soffit vents? (inland Los Angeles, cathedral ceiling)
1
Placing a roof terrace on XPS insulation
1
1930s roof with no felt lining, solutions without removing roof
1
PIR Insulation installation between joists