How can I mount a desk on a wall with L-brackets?

I'm currently planning a new wall-mounted computer desk and intend to use something similar to this as the top: 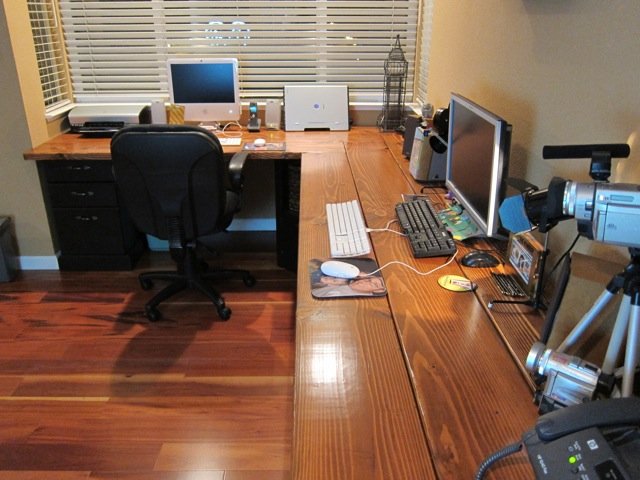 If anyone has a suggestion that I seem to be completely missing, I'm all ears :).

EDIT: Forgot to mention that the ends of each desk will not have a wall for support, so the entire weight will be supported by the L-brackets themselves. Overall I expect the length of the desk to be around 5' in each direction from the corner.

L Brackets are not going to be a good idea for this type of project. As a minumum you will need to have a triangle type bracket - if you can find something large enough. If you want to avoid any type of legs right at the front edge you could build your own equivalent of a triangle bracket out of wood.

If I was setting out to make a built in unit mounted onto a wall I would secure a wood piece along the wall to every stud at the table height minus the top thickness. Then I would use this horizontal strip as the rear side mount for the table top. Then I would install supports under the table from near the front edge and angle them down toward the bottom of the wall where they could be fastened into the wall stud and/or the floor.

At the end of the day I would really suggest that you step back and evaluate if it really necessary to fasten your table to the wall. Having it sit on its own supports makes for a huge bunch of flexibility. It can be moved, taken away when all computers of the future fit into a pocket and a computer desk is no longer needed, and lastly you can easily get it away if you ever want to sell the house.

That's a pretty heavy table top to cantilever. I'd think about attaching a 2x4 ledger to the wall. That's a horizontal 2x4 screwed directly to the studs.

Then, I'd put 2x4s vertically, between the ledger and the floor at every other stud. Depending on the length of the desk, you could go every 3 in the middle to create some chair space.

I'd use these verticals as an anchoring point for angle braces that would come out about 20 inches from the wall and attach to the table top.

It could look quite good if you built it out of cedar and finished it properly.

I used adjustable shelving to build my standing desk. I didn't want to commit whole hog to standing, so this let me have the option of lowering it later if I wanted. After your feet adjust in the first month, it's awesome.

I have an 18" bracket for a 24" shelf counter. I have a second smaller bracket with a shelf for the monitor, since you want the center of the monitor at eye level. Like I said, I can move the whole thing up or down in about 1" increments. I use about every 3rd stud for mounting.

It's really weight dependent. If you're going to put a lot of heavy stuff on it like a workbench, it'll need more support. For a 23" monitor or 3, phone, paper and such, you're probably fine. You can use the higher rails for bookshelves.

I don't know what the weight ratings are, didn't research that since I'm not loading mine up that much. But I've had them up for years now. I used 3"-4" screws to mount so it had more grip into the studs. Maybe 5-10 per each 5 foot rail, they have holes where the screws go.

Smaller 7 1/2" with 6" brackets can be a bit tippy when I move stuff around. You can see I have 20 lb of weight to hold the laptop dock and shelf on. I've thought about making a U piece to go on the back to lock it in. 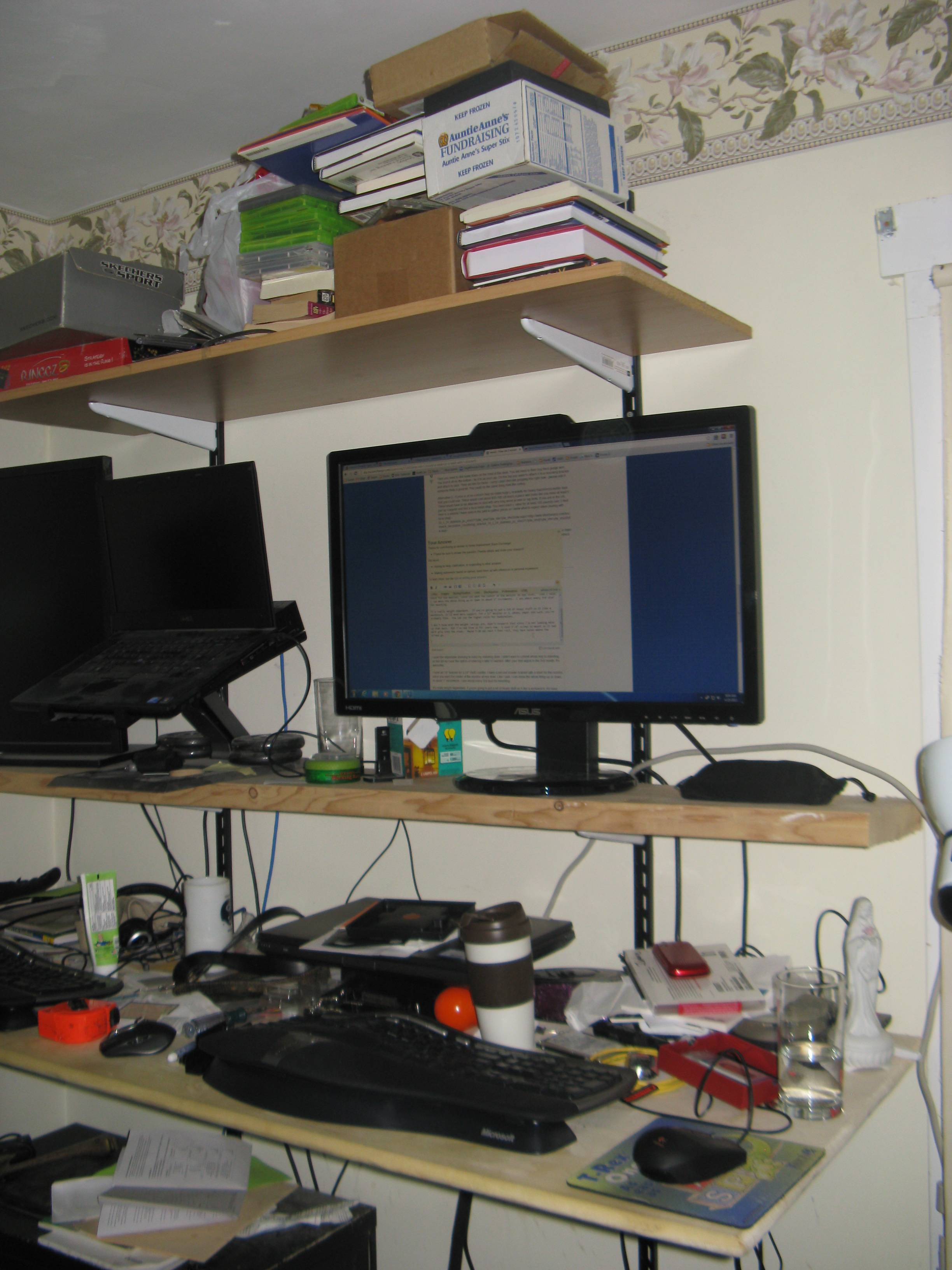 Alternative 1 - These type of designs are popular in europe. I have seen it in France. You will need some strong triangle brackets for the bottom. This will keep the back level.

Then you need to drill some holes on the front of the desk. You will need to then buy thick guage wire. You knot it off on the bottom - tie it to an end cap. On the top you need to attach it to a mounting bracket and attach to stud. They sell kits for these - sorry I don't feel like googling this right now - please edit if someone finds a good kit. You could do the same thing from the ceiling.

Alternative 2 - If price is of no concern they do make huge L brackets for heavy machinery/counter tops that you could use. These would cost about $50-100 (at least) a piece and looks like you need at least 6. These would have to be attached to stud with very long wood screws or lag bolts. If you are in the US, pull up craigslist and find a local metal shop. You need each L rated for at least 100 pounds over 2 feet. Here is a website I have used in the past to gather prices so I knew what to expect when dealing with local shop.

If you get an L/triangle big enough it will hold without sag. It will cost you a lot to set this up and your main concern is making sure the bolts don't pull out of the stud. I am sure others could give you better advice than me on bolts/screws needed.

Depending on how visible the bottom will be or how you want it to look, you could go to a metal shop and get 2 big pieces of flat steel about 2-4" wide and have them bend them to a 90° angle and then just drill holes for some screws and have that act as an oversized L bracket. Mount the bottom of the L along a wall stud, or if it's in the basement just bolted into the cement. I can tell you are going for the "my legs hit nothing as I slide in and around this table" appeal, Which is nice. If you don't want the steel L supports to show you could paint over them or cover them with something or mill some channels so they sit within the wood of the desk or the wall and then just fill in the edges.

Not the answer you're looking for? Browse other questions tagged wood walls furniture mounting desk or ask your own question.

6
How is a floating desk top supported against the wall?
2
How can I support a desk without legs or brackets
1
How should I attach a desk to a wall on one end?
3
how to "float" a large desk (3000mm x 720mm x 40mm) between walls
2
What do I need to know for wall-mounted desk
1
Floating desk on concrete block wall
0
Computer desk vibrates and hits wall while I type, need solution?
0
Wall-to-wall desk with battens
0
Vertical L-Shaped Desk to support 3 monitors without attaching to wall