What is the sheathing underneath my brick exterior walls?

I am trying to figure out what is inside of my exterior plaster wall that the brick is attached to. The house was built in 1946, has no insulation in the walls, and (oddly enough to me), has drywall with plaster on top of the drywall. I was actually expecting wood lathing of some kind. I'm assuming the sheathing is some kind of gypsum or fiberboard sheathing but wasn't sure if that was even around in 1946.

The first shot shows the sheathing through the hole in the plaster. The second shot has the sheathing on the left (with water damage). When you push on it with your finger, it is a little "squishy" and not firm like regular drywall. 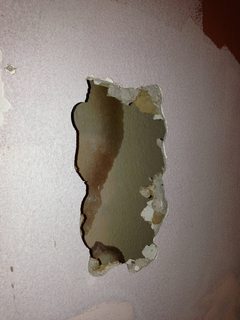 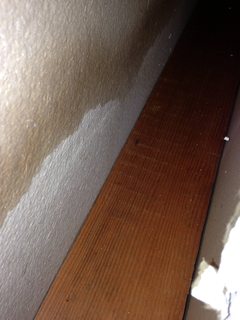 A better question would be, why is my sheathing getting wet?

The grain of the sheathing suggests to me it is Homosote Homasote. It should not be squishy, rather firm and resilent.

Something is allowing water past your brick barrier, and then, past what was vapor barrier (for the time, 15-30# tar embedded felt paper. I would look up, overflowing gutters can get behind fascia boards and run down the inside of the bricks, soaking the sheathing if the vapor barrier was broken during the bricking (as sometimes happened, also mortar bridging can cause this). In no case is it normal for the sheathing to be wet. Poor tuck pointing (especially around windows) can also allow water intrusion.

Once the water intrusion is corrected, all stud bays in the affected areas should be opened and the sheathing evaluated for viability. Also, opening the cavity will allow faster drying out and possibly see where the intrusion is starting.

As an aside, my 1941 house used a gypsum lath board for plaster.

Not the answer you're looking for? Browse other questions tagged walls brick exterior sheathing or ask your own question.

7
How can I resheathe behind brick fascia without removing the brick?
0
What exactly is this fiberboard-looking sheathing?
5
What type of insulation is needed for exterior walls on a brick house?
0
Kitchen remodel to studs, infilling a window, no insulation, no building wrap!
1
How should I insulate a wall I opened up?
4
What is the proper way to prevent water infiltration between exterior stairs and wall
1
What is the proper way to start sheathing an exterior wall?
2
How can I protect this plumbing in an exterior wall from freezing?
0
What is this construction material under my drywall?
0
Replacing R7 in exterior home walls