How do I reverse erosion which is lowering earth around fence posts?

Erosion has exposed several fence posts behind the back yard. 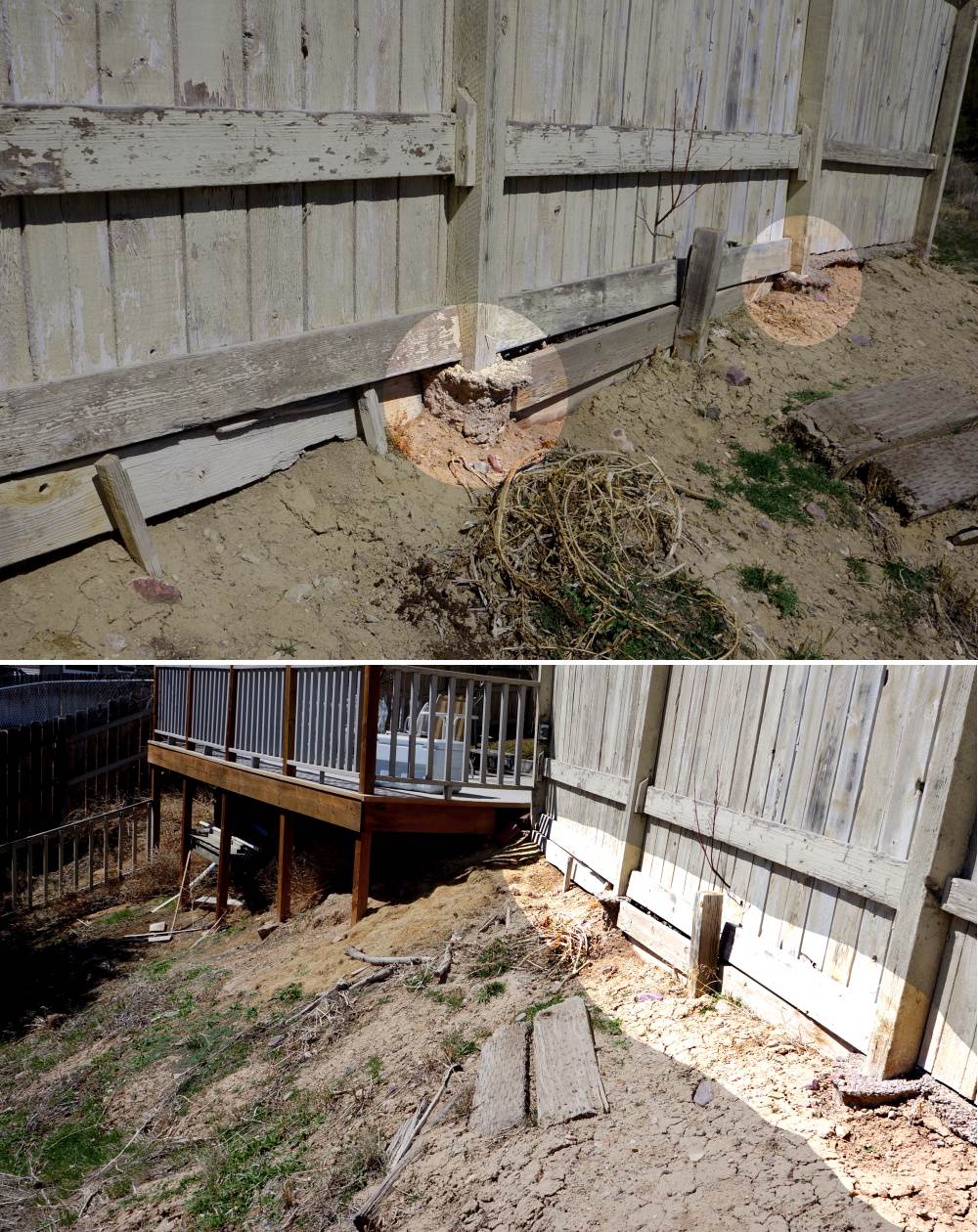 I've considered building a retaining wall, buying dirt and filling the area in then growing some ground cover, or eventually rebuilding the fence and digging the posts deeper. All of these are large, expensive projects that I can't afford for some time, so I thought I'd ask for some ideas.

What would you do with this fence if it were in your back yard?

I would build the retaining wall and fill in up to where the posts are supposed to be covered, then plant plenty of ground cover both above and below the wall. A slope that steep will continue to erode just as quickly below whatever you build unless you either terrace the whole slope or stabilize it with vegetation. If you don't have children or a dog that require a fenced-in yard, you might consider just removing the fence and planting ground cover to slow the erosion. No matter what you do, you'll want the ground cover.

Looks like that hill is mostly bare dirt. So, that's going to be a problem.

You've already mentioned two options: retaining wall and ground cover. If you can't do the retaining wall, I'd start with the ground cover. Find out if there are some hardy local native plants that will spread to cover and hold the earth together on that hillside for you.

If the erosion is primarily weather (rain) you could consider the ground cover along with some sort of physical barriers as well...perhaps pretreated timbers running horizontally down the side of the hill staked in. This would be a form of DIY geogrid.

Just buying dirt is not going to work in your back yard toward the down hill side of the fence unless you do one of the following two things.

2) Attempt to re-build the hill to its pre-erosion profile by adding back dirt. This will have to be done in a terraced manner in steps coming up from at least half way down the hill. The terracing will be similar to a retaining wall except that you divide the height up into a number of small steps. When terracing the step edges can be made using large stones, concrete, timbers like RR ties, or even the stackable landscape blocks. Using this technique the various steps can lead to some easier to landscape areas for plants, shrubs and even grass or other ground cover. Due to the amount of erosion that has already happened it may be necessary to build the terraces up in stages so that the lower ones are done first and settle in before starting the next step up. Fill dirt will be required to accomplish this as well.

Not the answer you're looking for? Browse other questions tagged repair fence landscaping or ask your own question.

3
How to set metal fence posts?
3
Should I add landscape rock before or after installing a fence around a dog pen?
0
Can I add a retaining wall to the base of the existing face?
1
Installing new panels in concrete fence posts with overhanging tree branches
4
How to make a Tall Retaining Wall
1
Cedar fence posts - advantages over pressure treated?
1
What should be done about this concrete retaining wall?
3
Compacting soil after removing fence posts to install new posts with vibratory ram?
1
Vegetable Garden Fence Design with 2x2 Posts