Why am I getting 50V at a light when the switch is off?

I am trying to put in a switch and a light it controls in a storage building and this is how I wired it. 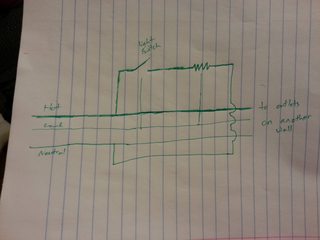 When I checked the wiring it registered 120V when the switch was on, and right around 50V when the switch was off. Why would power still be getting to the light (I'm guessing there is a problem with the switch) and why would it only be 50V? Oh, and where everything branches off at the beginning I have a junction box there where all of the wires are joined there.

The continuity test on the switch, described in comments, confirms that it is bad, since it shows continuity in both positions. Replace it.

I'd bet you are measuring a misleading "ghost voltage," which is a side effect of using a high-impedance voltmeter, which is the typical type of voltmeter, on a dead wire. This happens via capacitive coupling when you have an un-energized wire running next to an energized one and connect a high-impedance voltmeter. In your case, it would be from the switched wire running next to the hot wire.

To determine whether or not the voltage is actually present and being fed from a true voltage source, rather than being a misleading reading of an induced voltage from an adjacent wire, you need a low-impedance voltmeter.

What are ghost voltages and where are they encountered?

Ghost voltages occur from having energized circuits and non-energized wiring located in close proximity to each other, such as in the same conduit or raceway. This condition forms a capacitor and allows capacitive coupling between the energized wiring and the adjacent unused wiring.

When you place your multimeter leads between the open circuit and the neutral conductor, you effectively complete the circuit through the input of the multimeter. The capacitance between the connected, hot conductor and the floating conductor forms a voltage divider in conjunction with the multimeter input impedance. The multimeter then measures and displays the resulting voltage value.

Most digital multimeters available today have an input impedance that's high enough to show the capacitively coupled voltage, giving a false impression of a live conductor. The meter is actually measuring voltage coupled into the disconnected conductor. However, these voltages, at times, can be 80-85 % of what the "hard" voltage should be. If not recognized as a ghost voltage, additional time, effort and money will be lost troubleshooting circuit problems.

The most common places to encounter ghost voltages are blown fuses in distribution panels, unused cable runs or electrical wiring in existing conduit, open ground or neutral on a 120 V branch circuit or in card cages where 120 V control circuits are used to control assembly line or conveyor functions. Some amount of ghost voltage can be coupled from the hot side to the open side across the blown fuse. When facilities or buildings are built and wired, it's very common for electricians to pull extra wire through the conduit for future use. These wires are typically left unconnected until needed, but are subject to capacitive coupling. In the case of the control circuits, these circuits are typically located adjacent to unused control lines, thereby creating a potential for a ghost voltage measurement.

I'm seeing the similar phenomenon, 75V to ground. It would make a CFL bulb slightly flick (ghosting). I first thought there was something wrong with the wiring. But after double check several times, I realized it must be the leakage current causing this. I couldn't quite measure the voltage drop with a resistive load (regular bulb) in place at off state. I bet it will be close to zero. It does light up an electrical test pen, kind of make a uninformed person scared.

Be careful when reading residential voltage with a DVM meter. My Fluke will read 121VAC at a single pole switch with the switch On, and 50vac with it off. But the scale changes from V to mv (milivolts). The scale changes dynamically and the v in milivolts on my Fluke is very small. 50-60mv is typical voltage float on ground. I have never measured a true zero with household wiring.

Sounds like the power is trying to find a neutral and thats the residual you are getting. Dead leg. Does your switch interrupt the common(hot) and then feed the lights. I wired lights once interrupting the neutral instead and electricity will seek out a ground/neutral (air, back feed, etc...). Should take power from source(breaker box) to a junction box, at box take that common(hot) to the switch(single/double pole...what ever) bring that back to the common(hot) on the lights. The neutral from the breakerbox at the junction will connect to the neutral on the lights. I sent the neutral to the switch and the common to the lights once and the lights will still get power but no neutral, sure this will turn the lights on/off, but the power will at the lights that is still getting there will seek a neutral or ground. Just enough to give you a glow....even on an LED/CFL light.

7
How can I replace a light fixture?
1
Why is my kitchen ceiling light not turning on with the light switch?
2
Why does my new switch keep tripping the breaker?
0
Why does this switch trip the breaker?
1
Pilot light on switch comes on when light is off
0
Light fitting had water in it - bulb has been removed, and the switch is off, but breakers for the downstairs light circuit won't turn on
1
Light won't turn off, is there a short?
3
Why am I getting shocked when my breaker and switch is off?