Do I need to add a vent when moving a toilet drain across the bathroom?

In working on finishing our basement, I've come to the bathroom. It was originally plumbed with the plan of having the fixtures share a common wall (vanity, toilet, then tub). so there is already a pipe going up the wall where the vanity would be, with a stub for the vanity drain. And there is already a toilet stub in the floor, and a square full of gravel which I'm presuming is to give us freedom for whatever tub we ever installed.

If it matters, this is a concrete basement floor, and I believe the main sewer/drain line for the house runs directly under this room, likely under these fittings, in the order listed. It's 2 year old construction, so everything is PVC. I'm familiar with the ideas involved in moving a drain in concrete.

We want to convert the tub into a corner shower, and move the toilet to occupy where the end of the tub was. (I'm also sliding a wall out. Great thing about unfinished basements...) I expect when I get under the concrete, this will involve about a 4'-5' branch from the main sewer drain out to the new toilet, rather than extra pipe and bends to connect where the original toilet drain was.

My question is what (if anything) do I need to do for a vent? Can I just run over to the wall behind the new toilet, come up into the wall, then run around to the existing vent? Would it be okay to leave a vent out?

Here's a terrible drawing, so you can see what I'm trying to describe... 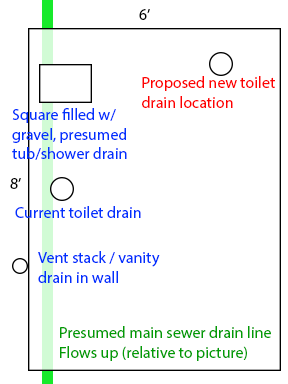 I expect there to be further details needed, like I -think- that vent pipe is 2", but I'm not sure. I've had this question rattling around in my head, trying to figure out how to get all the detail in, and finally just decided to ask with some and fill in if something's needed.

You must have a vent. The toilet will not flush properly without one, and there will rarely be enough water left in the bowl. You need a 2" vent to take off from the branch line within 6 feet of the toilet. It can run up any convenient wall until it is above the toilet's flood level. Then it can run near horizontally (1/4" per foot) anywhere to tie into an equal or larger vent.

There's any number of ways to properly vent a toilet, and several common ways that are technically wrong, and even more that are just plain wrong. It's impossible to suggest a good method without a lot more information.

Not the answer you're looking for? Browse other questions tagged plumbing toilet drain-waste-vent or ask your own question.

2
Toilet sits directly over sewer return — what sort of venting?

5
Do I need a separate vent stack for my kitchen sink?
4
Is there a shower drain pipe in this picture?
4
Need guidance for venting a new rough-in for basement bathroom
5
How can I vent a bathtub trap when the drain is routed under the tub?
1
Should my bathroom's plumbing vent be downstream of the toilet connection?
0
Will a toilet flange bolt cause a problem if dropped into the drain pipe?