How can I convert two recessed lights on a single pole switch to two separate lights with light controls?

I have a bedroom with two recessed can lights operating from one wall switch. I would like to add a ceiling fan/light to one of the outlets and convert the other to a track light with its own light switch control. What are the wiring connections I need to make to convert this into 2 separate lights with light controls?

Conversion is too soft a word for what will have to be done, it is more than likely going to be a rework.

Somethings you need to figure out:

and convert the other to a track light with its own light switch control.

This can be done but even in the best case scenario, you will need to run an additional cable from the switch gang box to one of the luminaires. This is of course assuming that the cable coming from the breaker is coming into the switch box. 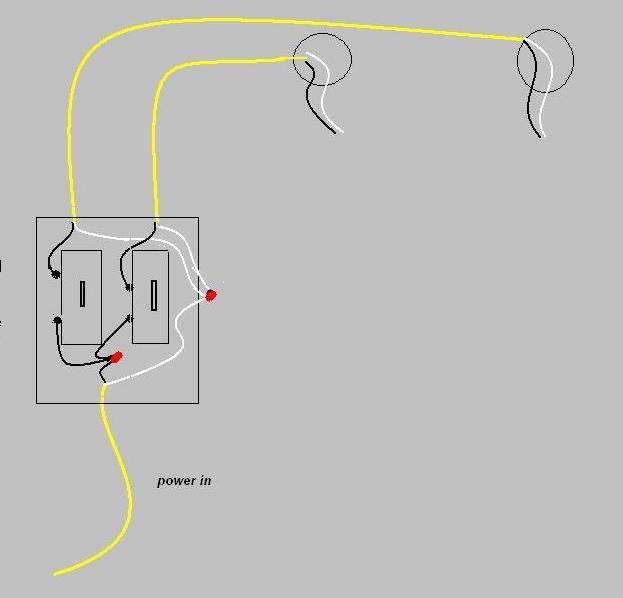 It becomes more complicated if the power to the breaker is coming into one of the two lights. In this instance you would need to run a 3 wire and ground cable from the switch box to the light with the power line coming in:

NOTE: All of this of course is assuming that if one of these happens to be a fan/light combo, then the fan and light will be wired to turn on with a single switch, rather than separate switches for each function.

NOTE 2: This also assumes that you have already have a double gang box for installing two switches. If you do not have one then you will need to open up the wall and install one.

1
Can I convert a single circuit with multiple lights/1 switch to control 1 light/switch
3
How can I control two ceiling fans and lights with one single pole switch?
3
Adding recessed lighting to room with ceiling fan/light already installed
1
Ceiling Fan with Recessed Lights
2
One light switch powers two separate light switches
1
How to convert 2 3-way switches to one single pole switch with dimmer?
2
Two 3-Way Switches and One 4-Way Switch Controlling two lights. How do I convert the 4-way to a single pole switch?
0
Need to separate 2 lights on the same 3way switch so each switch only controls 1 light