How can I update this very stubborn antique bed frame so the mattress fits properly?

How stubborn you ask? Well the bed frame has three issues, but really only one and the other two are only a result of the first:

As promised, here are some pictures. I'm shocked I found some really good ones:

This person has the same problem as me. Notice the tilt.

Same album as above. This one shows better the interlocking connector. 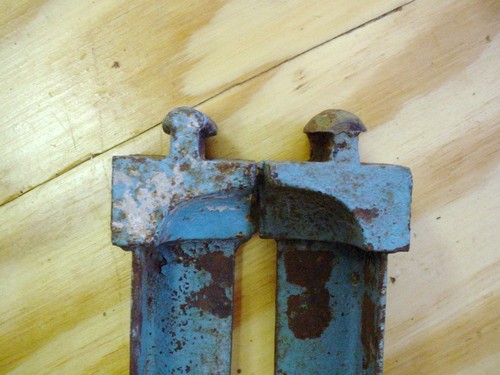 Our frame isn't quite so frightening and industrial, but this is a good shot of a similar design with no bed. Our pegs are more tapered like the first two photos.

So now that you've heard my problem and even gotten some neat pics of other people's bed frames, here is what I've come up with so far, and I'm hoping to get more intel here:

Get the bed frames extended. This was the suggestion at another site last year and it proved to be a good idea but hard to execute. There was concern for the integrity of the rails, in terms of both their antique status as well as their actual post-op performance. None of the welders seemed more than casually confident, if that. I got more responses like 'Oh sure, I can give that a shot.' The last thing we want is to ruin our horribly short classic frame and crush our cat in a dangerous trip to the floor. But maybe someone can advise if this is the best idea and who I should lookup in the phonebook other than welder.

Lose the rails, keep the connectors. This was my nifty idea, which means it's either genius or the kind of bad idea I tend to fall for. Simply chop off the heads of the rails, just below the curve I would think, and have the iron worker weld on the appropriate connector for a modern frame. The problems I have seen in this are : 1) There is no going back, the current rails are scrap or installation art, 2) I don't know if the curve will be a nice touch or in the way but I am pretty sure cutting higher would be too much and I'd just have broken puzzle knobs, 3) I don't know if it will be sturdy and sound enough for either end of this abominator of an adapter, and 4) I have no clue what the appropriate "new" piece would be right for the new end.

Something else. I was pondering some sort of funky extender with just the puzzle bits, but I remembered I'm an idiot and that wouldn't get past the curves. Her mom suggested we pile on the bed slats so the bed rests on top, which was better but not great and did result in some loud clacking wake ups and cats going everywhere. Plus if there is some reliable or clever solution that lets us keep as much of the bed frame (or as little, if that's the way it goes) but modernized, I'd prefer that over having to deal with this again with the next mattress or surrender and have the headboard lean on the wall and footboard go in the garage.

Also, if anyone can tell me or point me to more information about this style of bed frame or bed rail, I'd love to get nerdy details. It will make however much this costs me in time and dough sound more romantic.

It may be that the frame was originally designed to have slats span the rails, and not have the mattress (box spring) sit directly on the rails. This would have lifted the mattress up a bit, and possibly allowed it to ride over the bits that are giving you trouble.

This was one persons solution: 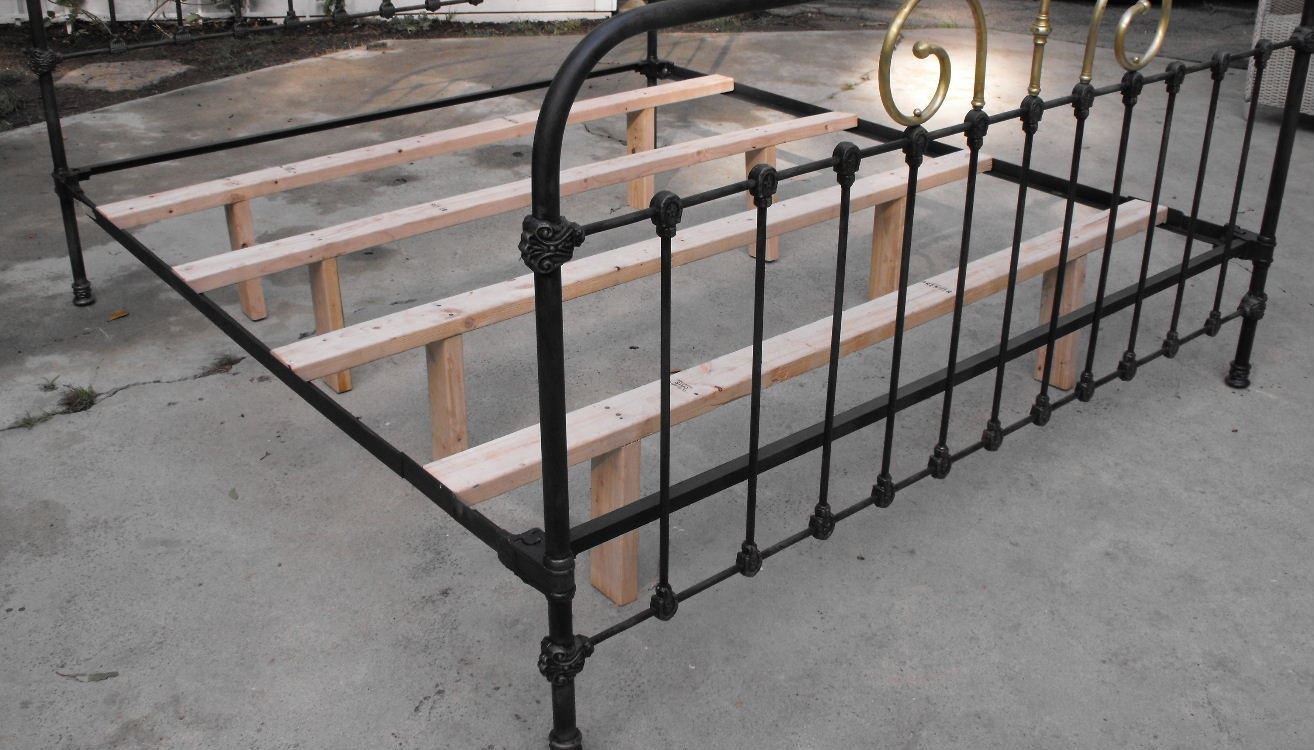 I have a simular bed. Are you sure you're not putting the rails in upside down? My rails have the same curve but it faces the floor.

I would look for a blacksmith and sweet talk (business exposure on the Internet, bla bla) and then be ready to fork over cash.

A wrought iron replacement would look more period, plus you can sell the whole thing later as authentic colonial length bed(with the original rails)

Not the answer you're looking for? Browse other questions tagged furniture metal bedroom or ask your own question.

3
What options are available to hide a TV in the bedroom?
4
Why won't this bed's feet touch the floor?
1
How do I turn my top-heavy headboard into a freestanding headboard?
4
How can I level my bed?
2
What do I need to use a headboard?
2
Ideas for bracing a bed's side rail
0
How do I use a headboard intended to mount on a wall onto a bed frame instead?
1
How to take apart this bed frame joint with hidden screws