How do I replace the front door on a stucco house?

I'm going to be taking out the various floors that have been laid in our house down to the sub floor so wood flooring can be laid. But in doing so the floor will be about 1 inch lower than what it was and the front door will have a gap at the bottom. The jamb is standard size and my plan is to replace the entire unit with a prehung door.

The problem is, I really don't want to have to patch the stucco around the door jamb. I've been reading on how to do it and one site had a door installer provide the steps he uses. I just want to run them by here to make sure it is doable.

In case someone comes across this in a future search, here is what I did on a similar project:

First, I used an oscillating saw with a plunge bit to cut the nails—-much easier than a sawzall. I used little magnets to sweep along the face of the stucco mould and locate them, then I plunged in from the side to cut them. I cut the paint with a utility blade along the seam where it joined the frame and tapped the mounding free with a hammer & chisel (aka screwdriver).

Then I cut the door frame nails with the plunge bit from the front and back after locating them the same way. Since my door also had zero gap between the frame and the studs, I had to do some persuading with a hammer to move the stud where I wanted it, plus a slight trimming of the bottom plate with a hand saw. My header was also nailed out of level and I had to tune up the corner with an actual chisel.

Now, my stucco molding was 1” thick and they apparently do not make that any more, so it was impossible to replace (would have been easier to paint and reuse it but it was in rough shape). I had to go with the 3/4” stuff. I also went with a door frame that was ~1/4” wider to compensate (old was 4-1/4”, new was 4-9/16”). The shape of the channel turned out to be different as well, so I simply cut off the exposed lip of the stucco with an angle grinder with a diamond wheel. I also had to rip off the lip of the stucco moulding on my table saw.

I had to cut the top of the stucco about an inch higher to match the new, standard sized door frame I bought from the big box store. I used a grout blade for my oscillating saw to do the corners. To finish I used OSI Quad caulking between the stucco mounding and stucco and it turned out great, no need to repaint anything because I cut a nice clean edge.

As you can tell, I ran into every single nightmare possible! But I could see all of them coming, had the right plan and more importantly the right tools. I wanted to share my experience in case someone else is looking to do the same job. Good luck! 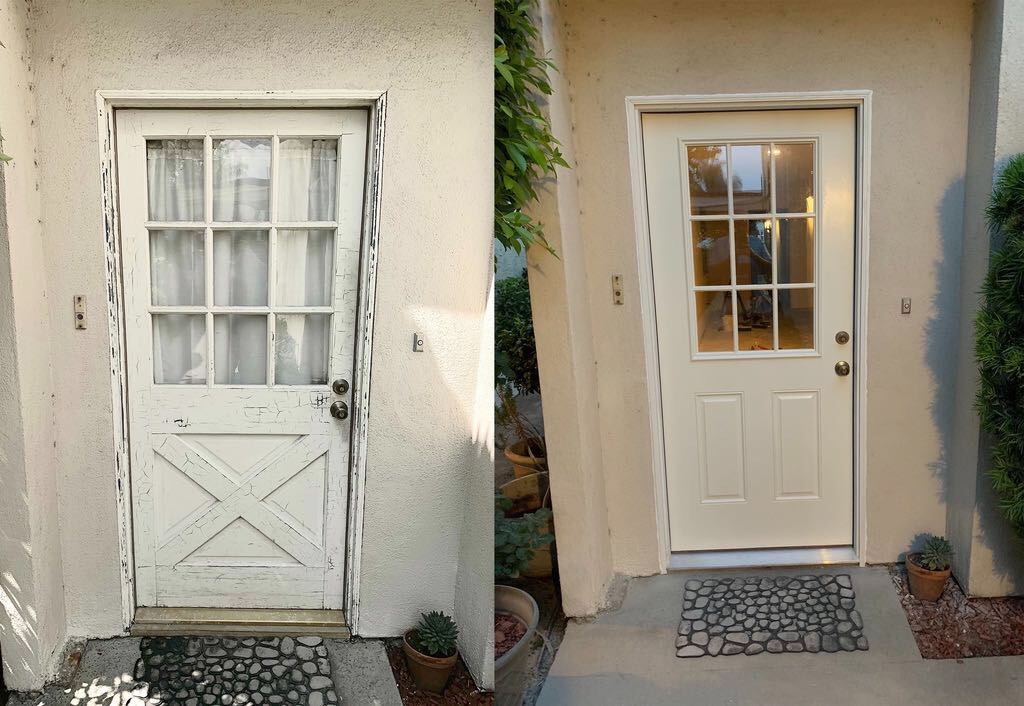 I've finished pulling the old door and jam out and installing the new one. The method did work but was a bit harder than I thought. First, my front door jams where nailed flush to the framing with no shims making getting the saw in there pretty hard. Because of that, the stucco moding did seperate from the stucco some but no bad, I will need to go back and patch those cracks.

Not the answer you're looking for? Browse other questions tagged doors flooring stucco or ask your own question.

4
How far to put a prehung door in a rough opening?
2
What could be causing wall cracks through the middle of our house
0
How can I finish the gap above my door with Stucco?
2
Is it possible to move a front door?
1
Installing door in 2x6 wall (drywall only on 1 side)
0
How to insulate under a front door
0
How To Remove Decorative Logs From Stucco Exterior
1
Inswing door over the rising pitch on a porch floor