Center of a wire nut holding neutral wires is burned, but it doesn't seem loose

I grabbed a power outlet tester, which said Basic Outlet 1 was "Correct," but Basic Outlets 2-4 were all "HOT/GRD. REVERSE."

Because I smelled burned plastic around Basic Outlet 1, I opened it up and found that the wire nut holding three neutral wires (one coming from GFCI Outlet, one going to the Basic Outlet 2, and the third for the receptacle itself) was burned.

I saw a similar photo here, and people there were saying it could be due to the wire nut coming loose. But as you can see on my photo, it doesn't look like this burned wire nut was loose.

What could have caused this? Why didn't GFCI or AFCI trip? And why is the outlet tester saying "HOT/GRD. REVERSE" on outlets 2-4? Thank you. 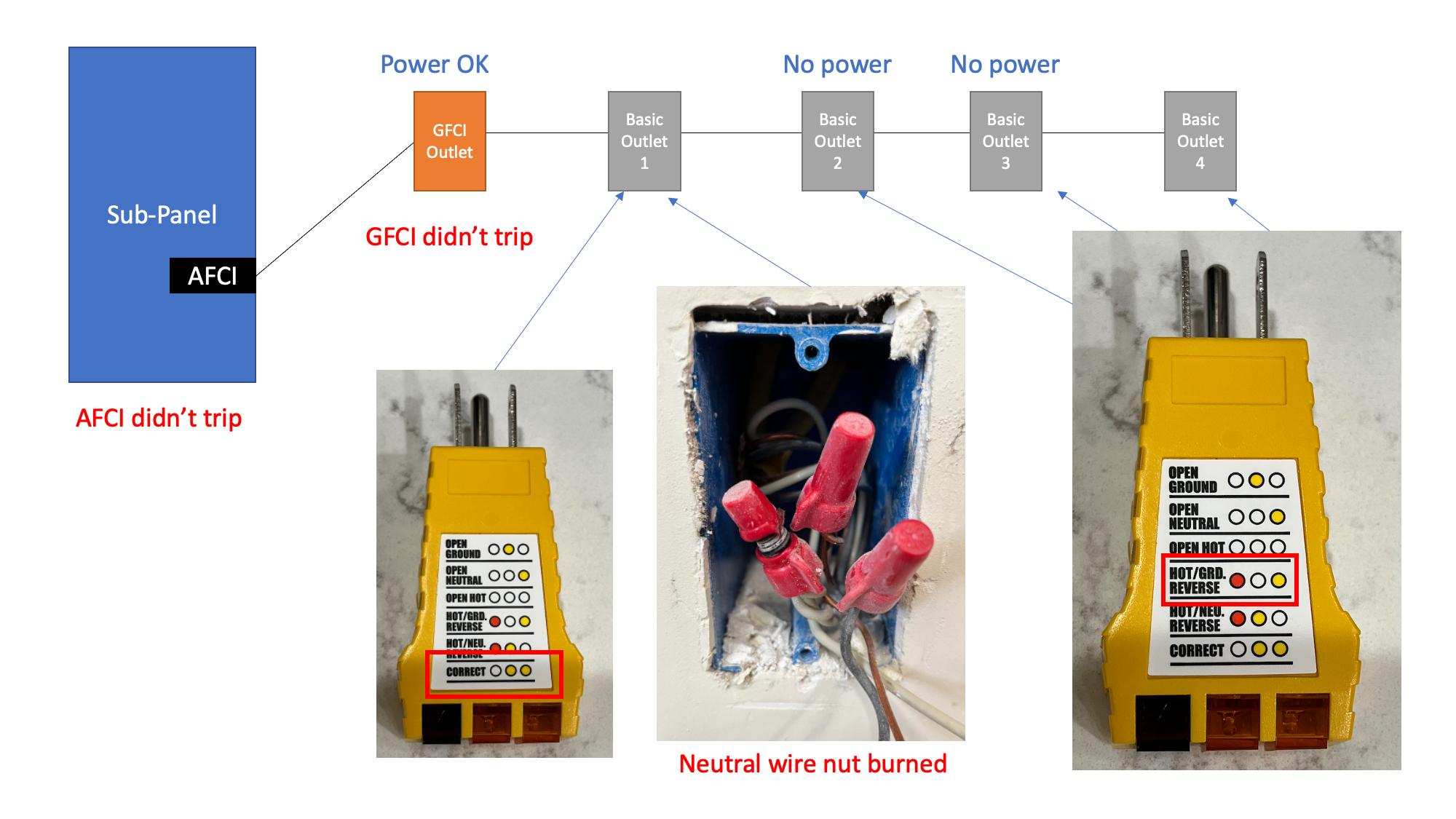 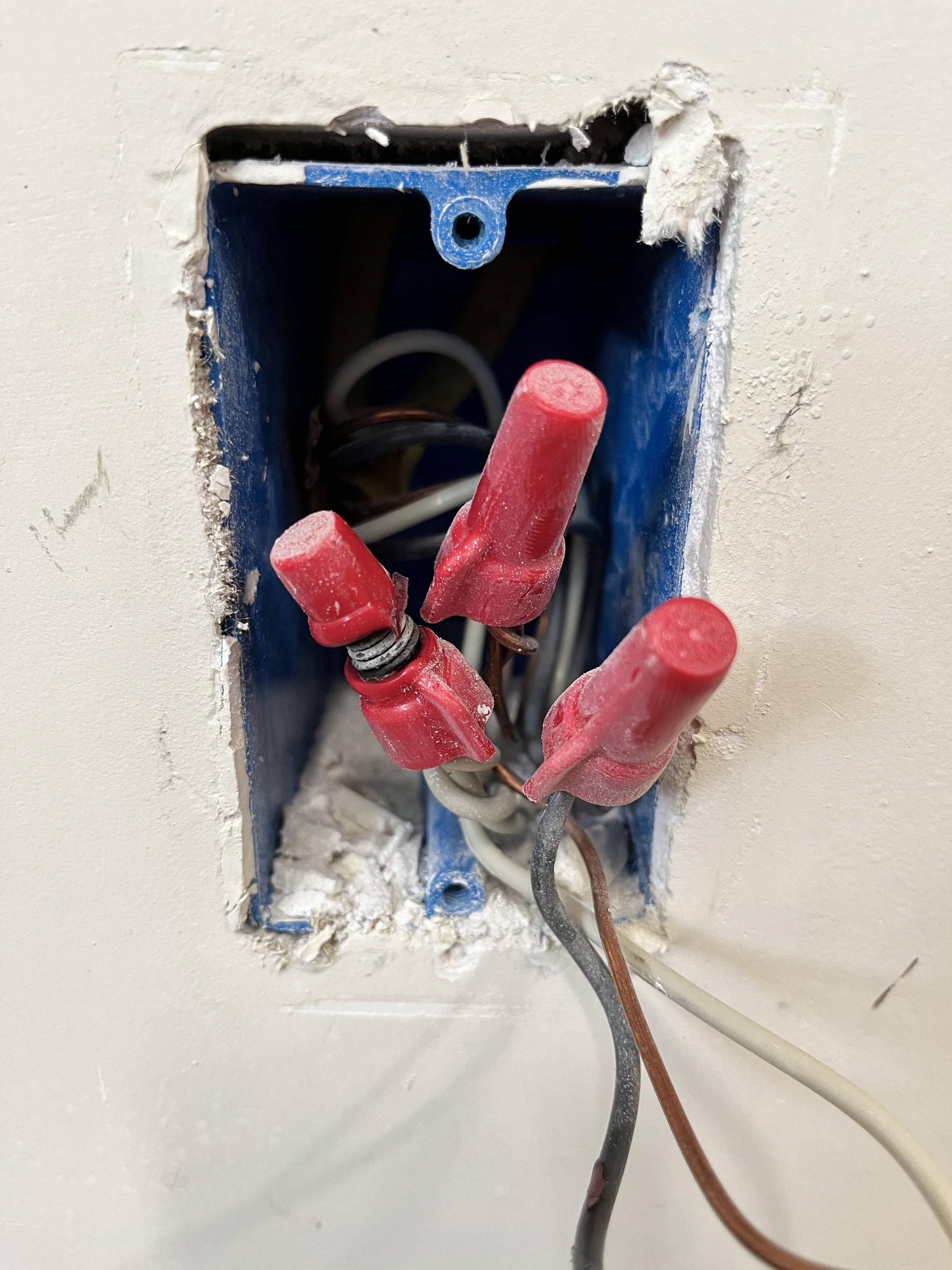 But as you can see on my photo, it doesn't look like this burned wire nut was loose.

What does a loose wire nut look like? That characteristic does not lend itself to photo inspection. It must be determined by feel or by test instrument (and nobody bothers with that).

Generally wire nuts are loose if they're not "gorilla tight". And a nut can be tight and still have a problem, if insulation was not stripped correctly or the wires not lined up appropriately.

Why didn't GFCI or AFCI trip?

Because not all bad connections are arcing bad connections. Some just behave like plain old resistors, making heat. For instance if improper installation caused service current to run down the wire nut's steel spiral.

No GFCI trip because it wasn't a ground fault.

And why is the outlet tester saying "HOT/GRD. REVERSE" on outlets 2-4?

Because the labels are hokey and unreliable. Right off the bat, they're tuned for detecting wiring mistakes in brand new wiring, and definitely not wiring failures in old wiring that worked before. The labels, I mean.

The lights are simply 3 neon lights across

It's hard for them to be wrong, except realize a floating wire will be "pulled to the middle" by the 2 neon lights in series, causing those neon's to glow somewhat.

That indication reflects the fact that you had a load plugged into the circuit (which you generally don't when building a building), and that was pulling the neutral up to 120V potential (which is why we insulate it, by the way). As such H and N was at same potential, extinguishing the center light, and N-G were 120V apart, lighting the red.

If you actually learn how to read the lights, you can peel that label off and throw it in the trash where it belongs. Or you can replace it with a more accurate and helpful one LOL.

There is already an excellent answer about how to fix this.

As far as Why didn't GFCI or AFCI trip?:

GFCI only trips if the electricity goes someplace it shouldn't. It was in the right place - flowing through the neutral wires. It just heated up the connection along the way, turning electricity into heat...

AFCI had a better chance of catching this. If this were a loose connection getting knocked around then AFCI would have very likely caught it. But instead it looks like it was a tight connection with high resistance. Perhaps one of the wires was touching the other wires but just barely - so it conducted electricity consistently (it is the inconsistent type of problem that AFCI will catch), just not very well.

Which gets back to the multi-layered (or "swiss cheese") approach to safety, whether in electricity or airplanes. Each piece has a different purpose, and they all work together to help prevent little problems from becoming big problems.

All that being said, this is a perfect example of the value of a metal box. If the melting here was just a little bit worse it could have spread to the plastic box. A metal box can take the heat a lot better than a plastic box - and therefore far more likely to contain the problem. Plus if the neutral wires ended up touching the inside of a metal box after the wire nut melted then the GFCI probably would have tripped because a little bit of the current would have gone to ground, causing a detectable ground fault. With a plastic box that doesn't happen.

why is the outlet tester saying "HOT/GRD. REVERSE" on outlets 2-4

That is an interesting tale. A 3-outlet tester, what Harper calls a magic 8-ball, is actually an incredibly simple device. (Well, usually it is. There are fancy computerized versions which can provide all kinds of other useful information. Let's not go there.) It has 3 lights across each pair of wires. In your particular version:

This works great for simple wiring errors. If in an otherwise normal circuit there is a pair of wires flipped or a single wire disconnected, it gives a useful answer. But if there is more going wrong, it really can't tell you what is actually happening. For example, all lights off = Open Hot. That is based on the assumption that only one wire could be wrong. What if instead of hot being disconnected, neutral and ground were both disconnected? It would read the same.

On to your problem:

It is hard to say exactly, but I think the high resistance neutral connection is causing a false reading on both the Hot/Neutral and Neutral/Ground connections. Normally Neutral/Ground would be a 0 Ohm (or very close) connection - no voltage to flow through there. But instead it gets something. Normally Hot/Neutral would be connected only through the tester light, but instead there is high resistance causing a problem. The end result is that the lights are nearly meaningless for anything out of the ordinary. Melted wire nuts are out of the ordinary.

Turn the circuit off and them remove the connector. At that point you will see where the wires got hot because they were not making good contact. You probably have a wire that was not properly inserted with the others. Remove wire nut and then cut off the discolored copper ends, restrip then tightly twist them together before putting on a new wire nut. The copper must be shiny then you install the wire nut which must be tight. Close it up and turn the power on, it should all be OK.

As your theory of the loose connection under the wire nut sounds the most obvious there is another scenario that it could be a mulitwire wire connection with 2 hots on the same phase as a result the neutral wire would become overloaded with current in excess of the wire size...just saying. Probly not a good connection by the looks of the quality of the box itself.

user156864user156864
1111 bronze badge
New contributor
user156864 is a new contributor to this site. Take care in asking for clarification, commenting, and answering. Check out our Code of Conduct.
Add a comment  |

13
Why not use a plastic receptacle box for an outdoor outlet?

3
Electrical outlet has two black hot wires but one neutral white wire?
0
Is this GFCI shot?
2
What to do with a new duplex outlet when the tester says Hot & Ground are Reversed?
4
What are the relationships between ground and arc protection in breakers and in outlets?
2
Electrical outlet is reading “correct wiring” but doesn’t work
0
Kitchen Outlet Series Not Working
1
Electrician strangely cut and capped hot wire of receptacle
1
Loud circuit breaker pop with burned neutral wires. Need advice on next steps. Photos in description
0
Wiring a blank face afci, gfci and a regular outlets in a circuit, made a loud noise in gfci box