The electrician forgot to place back the metering clamp for home automation on the circuit, so I went back and I was putting it back, I noticed the pigtail from AFCI to neutral was rather loose not torqued down at all.

How big of a risk was this? I know loose neutral is bad, just not sure how bad is LOSE not connected neutral AFCI pigtail.

I don’t think that pigtail carries load as circuit was working, is it only used for powering AFCI electronics? That would explain why wire was not heating up/arcing.

I torqued it down ( hopefully not too much but pretty tight, now I’m worried that it’s over torqued )

Does this look over torqued ?

Not sure if it’s flattened too much?, I tried to torque it roughly same on actual conductor 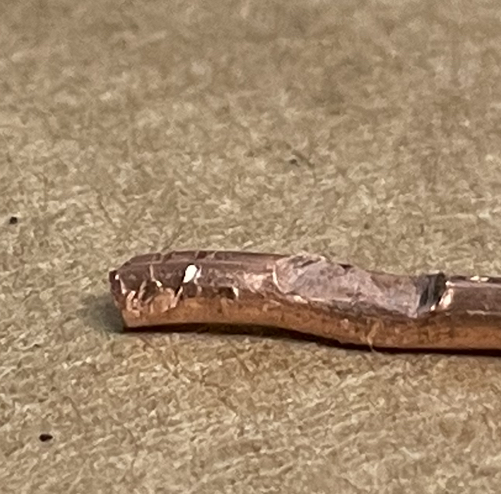 And yes electrical will be coming back next week …

A loose connection may make functionally useful contact, or it may not. It's hit or miss. If not, it has a fair chance of arcing, creating tremendous heat, damaging the neutral bar and starting a fire - good thing you just installed an AFCI breaker, which would "hear" that arcing even though it was on the line side of the AFCI, because (science fact) current is the same at every point on a series loop.

It has long been known that correct torque is essential on large wire connections such as feeder. Failures tend to be spectacular and destructive in a costly way. However, science has revealed that small wire connections are equally sensitive to torque.

As such, NEC 110.14 now requires that a torque indicating tool (i.e. a torque wrench) be used to set all torques, even on small screws, anywhere a torque is specified. Torques are specified on panel neutral and ground bars.

The least costly torque wrench of appropriate size (that isn't cheap Cheese junk) is a 1/4" beam-type torque wrench with a bit holder. Beam-type wrenches never go out of calibration. Downside: "the entire device is made of metal" unless you get a non-conductive extension bar for it.

I don’t think that pigtail carries load as circuit was working, is it only used for powering AFCI electronics?

However, not all do. In particular, Siemens has recently introduced a tandem AFCI breaker (Q2020AFCP and others) that uses its neutral connection to power the internal electronics only. The load neutral wire goes to the neutral bus bar.

If you have one of the latter type, properly attaching the pigtail is still important but the failure to do so is unlikely to start a fire as the electronics use only a tiny amount of power (compared to the former case).

The pigtail from the breaker DOES carry current, the same amount as supplied by the hot. Just because it was loose doesn't mean it wouldn't work. Dangerous, but functional if not too much power is used. Glad you found it and will tighten it up. If I don't have torque specs I go to the German torque scale: "Gut 'en tight" (don't snip me for this it's just a joke).

Even if you downloaded the right picture there's no way we could tell if it's over torqued. You should have called the electrician back to correct it. If you're going to continue to worry about this, get a torque screwdriver and re torque the connections based on the values for the breaker and panel.

2
AFCI breaker tripped when there was no power to wire
8
Can I put an AFCI receptacle on a branch circuit that shares a neutral with another branch circuit?
5
Is it against code to splice wires inside of the load center?
4
How can I resolve tripping problems with CAFCI?
3
What options are there to achieve both grounding/ground-fault and arc-fault protection on old 2-wire circuits?
4
Arc-fault breaker in sub panel, pigtail to neutral bus or ground bus?
2
New house, new LG refrigerator & AFCI wiring
1
Is it okay to pigtail 12AWG and 14AWG on a 15AMP circuit?
4
Burned neutral wire on breaker