How do I fix an exterior door knob that will unlock but not turn?

My back door (which is only two years old) has a door knob that recently suddenly stopped turning. I can lock and unlock it, but it just won't turn. Here's a picture of the inside of the door knob: 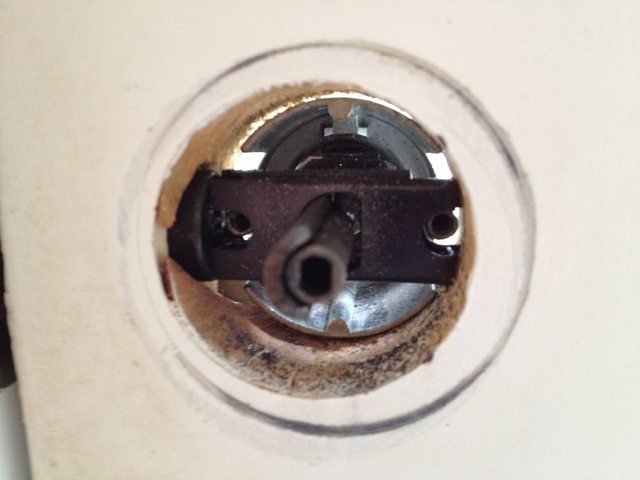 The very center bit is the lock mechanism, and I can turn it (locking and unlocking it) easily with a hex key. The half-circle immediately next to it appears to me to be the mechanism for opening the door — I could be wrong about that, though. It will not budge. The only two options I can see now are:

I'm more inclined to go with the latter than the former. Any other suggestions?

In its currently disassembled state, there is nothing locking the mechanism. You are correct that the C shaped half-circle shaft is what pulls the latch back when turned.

If you cannot push the latch back with your finger, the anti-jimmy device has had a piece break in it.

I had this happen on a bathroom door latch about two weeks ago, probably made by the same manufacturer as the shape of the lock actuator rod and latch actuator are exactly the same.

If you look at it, the lock actuator rod (the center piece you were turning) has a taper section just where it passes through the latch pull which means that during assembly, you manually push the latch back and it passes straight through.

Replace the whole door knob/latch assembly with new and you're back in action. 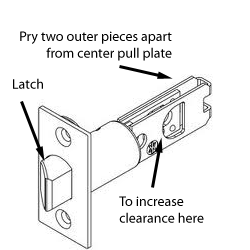 I had a similar problem recently and after reading this question and its answers, I realized I could buy just the latch assembly. So the key is to get the door open so that I could replace it. Rather than attacking the actuator rod, I decided to cut the latch with a hacksaw blade. To make the job quicker, I pulled back the latch as far as I could with wrench and then started cutting the latch with the hacksaw blade: 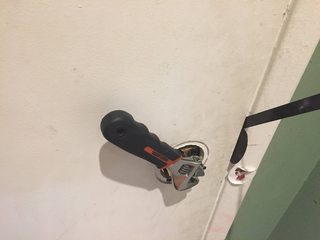 Initially, I used a piece of cardboard to make a handle, but I went to the store to buy a small hacksaw handle with a good portion of the blade exposed for just this sort of job: 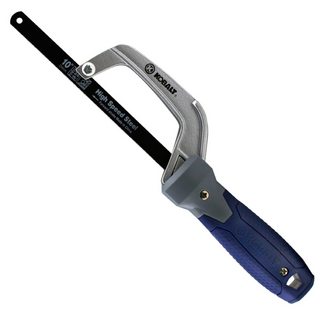 Once I cut through the latch, the door could be opened and the latch replaced. However, I did notice that the door hinges needed tightening so that it swings closed all the way. I also adjusted the strike plate, which wasn't properly holding back the deadlatch. I believe if I'd failed to do those things, the new latch would have had the same problem as the old one. Be sure to test the new lock carefully to make sure it's secure.

I would remove both the inside and outside doorknobs. Use a screwdriver to turn the bolt mechanism (the part that actually locks the door. Try to insert a small screwdriver between the door and the jamb and push the bolt back while turning the mechanism in the door. It may help to push or pull on the door on the door at the same time. If none of this helps try to tap the pins out of the hinges. Use a screwdriver and a hammer. Beaware that some hinges use setscrews to hold the pins in place and the door has to be open to gain access to the setscrews.

1
Why can I no longer turn the knob of my self-locking door from the inside?
0
Stuck Patio Sliding Door
1
How to unlock a locked interior door?
3
Door lock stuck, will NOT retract
1
Latch won't retract into my door unless I turn the knob
9
Unlock door with no knob
0
How to fix deadbolt lever that doesn't lock or unlock the deadbolt
12
"key will unlock the door" vs "key will *open* the door, but not unlock"
0
How to fix free spinning thumb turn in entry door lock