How can I hang things on a freestanding stud wall without it tipping over?

I live in rented accommodation and can't hang anything on the walls. My guitar collection (around 10) is taking up too much floor space, so I'd like to get them off the floor. I've been thinking about building a free-standing stud wall as in the pic below.

The guitars would be hanging from a slat-wall strip at the top of the wall, and the amps sitting on the platform below. The amps are reasonably heavy, and I suspect would stop the whole thing toppling over. The wall would be ply- or MDF-sheeted to prevent sideways movement. However, what would I have to do to ensure that the top-heavy wall doesn't a) bend or b) break away from its fixtures to the bottom platform? 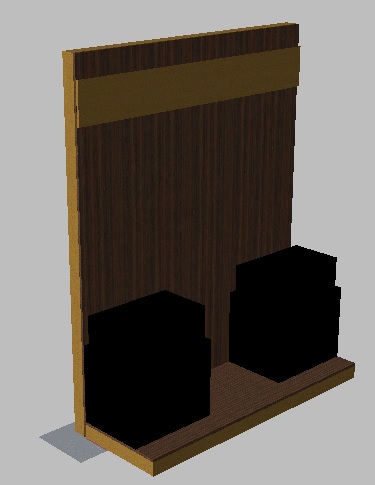 You could simply add a couple of triangular pieces of wood at the bottom next to the amplifiers. 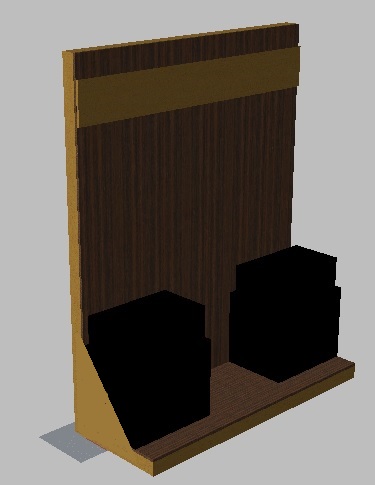 Another option (should be a comment but comments don't allow pictures): 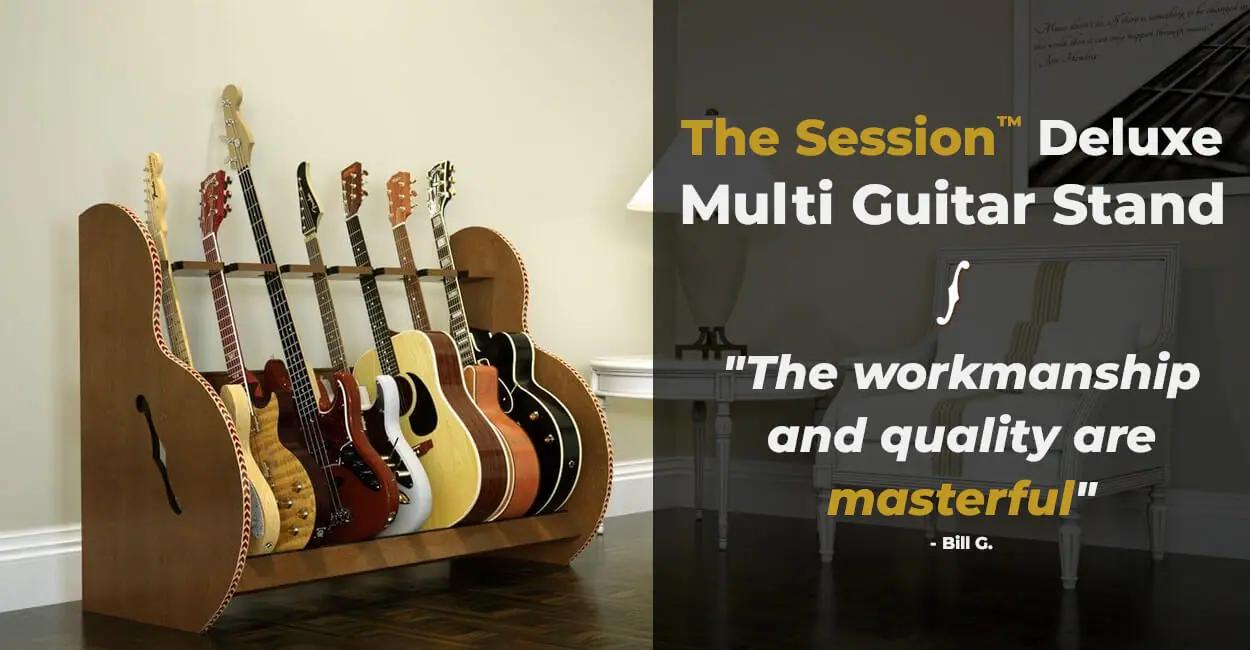 Have the entire thing leaning backwards slightly. The top of the unit would be against the wall, and the bottom would be about 3" away from the wall. The easiest way to do this would be by making the horizontal part thicker at the front than at the back. Your big chunky amps will be at the back, which will make it hard to see the difference in thickness. Guitar mounts should hold the guitar far enough from the wall that it won't hit the wall even at a slight slant.

I have a bookshelf that sits that way due to a low spot in the carpet. It's a lot more stable than an identical bookshelf in the next room on a hard, flat floor. The gap at the bottom is mostly hidden by the baseboards unless you're looking at it from the side (which rarely happens). The gap at the bottom also means you can run cables behind it more easily.

You should talk to your landlord instead.

Landlords don't want to enforce weird restrictions, they want to preserve the property value and be able to rent it again afterwards. Here, that means he will need to have your guitar hangers ripped out and the wall refinished. If you are willing to pay for that, there is a very good chance that you can get permission to hang things on your walls.

"Paying for it" might mean additional security deposit, or it might mean a non-refundable deposit. In either case, you would be looking at a lot of time and money to build your fake wall, so you should look at cheaper options first.

Having a clear plan for installation and removal which you can communicate clearly is also likely to be a big selling point.

I suggest you consider how heavy your guitar stand will be. In the hardware store, heft a few pieces of MDF or plywood.

You might spec out a wooden 2x3 or 2x4 frame with plywood triangles in the corners to keep it from warping. Cover it in fabric, stapled to the frame, perhaps with blocking behind the slat wall strip.

Even though you’re in a rental, if you put a couple eye bolts into a stud on the wall behind the stand, and secured them to the back of the frame, you would have a great deal of peace of mind vis-a-vis having the structure topple over.

There's no need to overthink or overdesign this. Just engineer it well.

If you connect the studs to the joists properly* it'll hold a hundred guitars. Since the load will all be interior of the wall, balance is not a concern either, barring any serious roughhousing.

With four or five such connections I'm confident you could hang the amps on the wall.

Obviously this requires an offset, which creates a bit of complexity at the sides. Just add lumber to flush things up on either the stud or the joist, whichever is inboard. The interior members don't matter.

Do that, then cover the structure as planned. I suggest blocking laterally at the inside corner to support the floor and wall paneling. The floor is especially likely to sag otherwise.

I would avoid the weight of the wall framing, and instead go with a wire mesh and a frame around it.

Acoustic guitars are not heavy, electric guitars tend to weigh more. The real weight is in amps and speaker cabs and pedals.

I suggest something like this as the vertical, but wider. You can hang guitars from some padded twin-hooks, and put them on both sides for balance. This example is very lightweight - yours would need a little more substance in the frame. 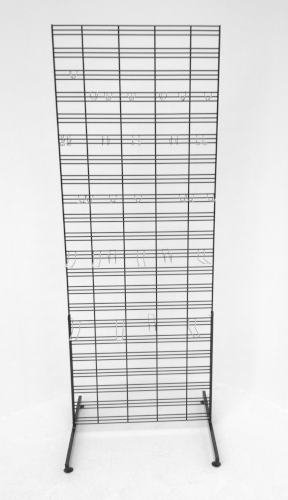 Your amps should sit on a wooden shelf that goes right across the bottom, directly on top of the legs/feet, on both sides. The bigger amps/cabinets should be cabled and rigged to use as-is, not moved around. A smaller practice combo amp/speaker can just rest on the shelf, to be picked up as necessary.

A see-through wall will make the room feel larger - if the sight-lines are blocked it will feel more cramped.

And finally, backlighting would be more visible this way.

This shelving unit with no shelves design seems like a sound idea. cover the front with some sort of wood (panelling or plywood) instead of using drywall.

It is much easier to secure brackets to wood than to drywall (which is basically dry mud with paper on both sides, and about as durable as that sounds.)

You could use upside-down shelf brackets at the bottom prevent the wall from toppling forwards,

10
What are some ways to appropriately hang things on a wall?
1
What does a novice DIY'er need to know before building a wall higher than 8' (14.5' feet to be exact)?
1
How to install drain in a wall above concrete foundation
3
Ceiling joists hung below top plate
1
Installing a stud wall without connecting to ceiling?
19
What is this sticking out of my wall?
1
Concrete floor brick wall gap leaking severely (garage above basement)
0
Help identify wall & how to hang things on it