Lemon pop up sink drain from Moen -not sure why it is leaking -should I return it ? How is the water actually leaking in this case?

So I have this thing https://www.homedepot.ca/product/moen-all-metal-pop-up-drain-with-overflow-brushed-nickel/1000837835

and it is freaking leaking, driving me crazy. I tried caulk and it leaked. Then I tried putty and it is still leaking and I can't figure out why and where. If I am leaving water in the sink for a while I am seeing/feeling humidity in the area marked with the red arrows. 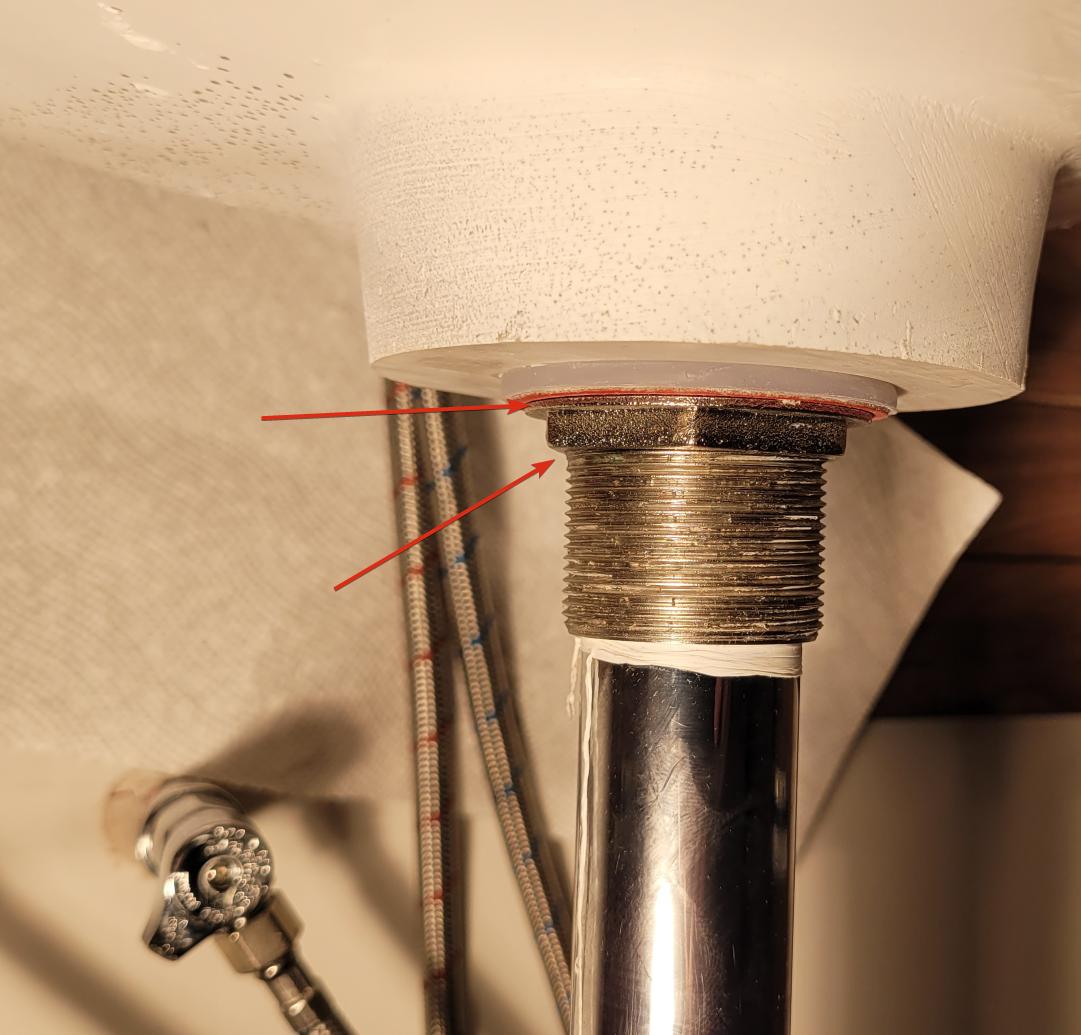 As far as I understand the construction of this thing the water could leak via two ways (red path or the blue path in the above picture) How do I determine which way the water is leaking? Is it possible to fix this by using Teflon tape or thread dope ? Should I even try that since the water is leaking from somewhere above in the first place ? Assuming everything is solid with the pop up and with the putty I am assuming the water could sit there in the overflow cuts from the last use of the drain and then it leaks down through the white and red gaskets. I suspect that this is what is giving me grief since the water in the sink does not seem to go anywhere ...this is not a masive leaking it would take maybe more than an hour or two to see a drop in the pan that is sitting under the drain right now. The reviews on the home depot side are not that great and the 1 star reviews complain about the same issue-leaking 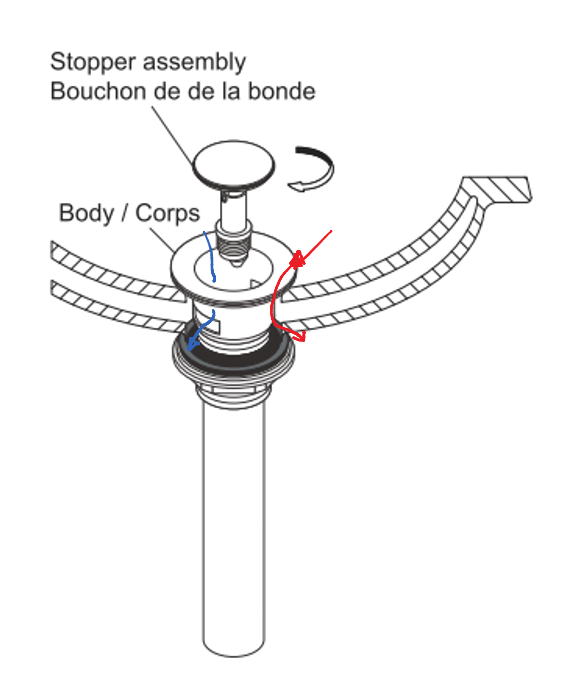 Make sure the clear washer underneath is aligned correctly, then tighten more than you already have.

Be sure to have engaged all the threads when attaching the basket (upper) to the tube, or it’ll tear apart when you put some real muscle to the nut.

A couple of drops means that you’re close to the right amount of tightness.

Sink bowls have a an internal passageway to provide a route for water entering the overflow drain opening; the opening is usually located at the user's side of the sink, just underneath the bowl's top lip. Water passing into the overflow opening runs into the space between the inner bowl (that holds the water when the sink is used) and the outer bowl, and then (via a slot in the body/flange) into the drain. (Note that the blue arrow in the illustration shows the slot, but shows water running in the opposite direction from correct operation.)

The "body" of the assembly (usually called the "flange") must seal to both the inner bowl and the outer bowl, so that water in the sink can only exit into the drain line by going down through the middle of the flange (because the drain pop-up is open). If one or both of the seals (flange-to-bowl on top, and bowl-to-drain pipe below) is defective, water will appear on the outside of the assembly.

Thus, the body/flange in your sink is not effectively sealed. This may be because a washer around the drain pipe is defective or insufficiently clamped, or may be because the top-end packing between the flange and the inner bowl is defective. In the US, this packing is a thick, compressible material called "plumber's putty."

2
How to deal with a pop up drain install when nut doesn't sit flush with bottom of the sink?
10
Should I use plumbers putty to install a sink drain?
0
How can I extend this clothes washer drain pipe to reach the sink?
0
Can Air Admittance Valve under bathroom sink fix bathtub drain overflow?
1
Drain making dripping sound after sink drains. No leaks
1
Do I need plumber putty or would the already existing rubber gasket seal this sink leak if installed properly?
5
Is this type of under-sink connection appropriate?
0
How to fix leak in bathroom sink at rubber gasket of drain assembly
0
Should I use an impact wrench to loosen a plumbing nut on a boiler drain valve?