Can I steal a neutral wire from another circuit?

I have some Z-wave light switches that I want to install; below is a link to the diagram for the light switches. Basically I can have all the wiring completed minus the neutral wire for the switch at the bottom of my steps. It will be harder for me to get the neutral from the light than run it in the basement. I have a junction box that is close (4ft compared to 100ft) but it's the living room circuit. Is there anything wrong with tying the light switch that needs the neutral to the living room neutral, based on the wiring is 12/2 and the breaker is the same amperage? 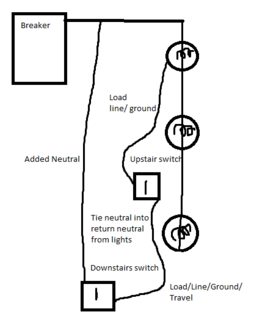 The other answer and the comments are of course correct, but there is a second aspect to it: it won't work.

Actually, it may appear to work, until you try to install a GFCI just about anywhere on either of the two circuits involved.

A GFCI works by comparing the current through the hot wire and the corresponding neutral wire. If those two currents don't match, the GFCI will trip. When you "steal" the neutral from another circuit, the current will go out through one hot wire, but come back through a different neutral.

I actually had an older home where the dishwasher and some kitchen outlet were wired on two different circuits with a shared neutral (that was probably grandfathered in from an earlier era). Trying to bring the kitchen up to code, I was going crazy trying to figure out why the GFCI would trip every time I turned on the dishwasher!

This other answer explains one reason why this code rule exists.

No, you can't steal a neutral wire from another circuit.

Each neutral wire is the return for the corresponding hot. If you "steal" a neutral from another circuit you run the risk of overloading that neutral wire (overheat, fire risk).

6
Can I run a ground wire of a single circuit to the panel outside the house?
4
How can I wire this three-way circuit between two buildings with only 3 conductors?
4
Can I connect to any neutral wire in the house?
6
Is this an acceptable way to add a light to a 3-way circuit?
3
Single Neutral for Several Smart Switches

4
How can I replace a two way switch with a ZW4001 Z Wave enabled light switch?
0
How do I wire 3 way switches where the power comes in at the light?
1
How to wire light with a switch in the middle of a circuit
1
How do I convert from 3-way switches to dimmers?
1
Wiring a Z-Wave 3-way auxiliary with neutral from other switch? (w/ diagrams!)
0
Can I take power from the hot line on another switch in a multi-gang box?
2
How can I be sure a wire is truly neutral?
0
Upgrading to smart light switches but have only one neutral wire in the box
2
Wiring Z-wave Dimmer switch into 2-gang switch setup
0
Apartment using ground wire as neutral