Should I put a dimmer switch on a ceiling fan?

I have a ceiling fan on our bedroom's vaulted ceiling. Since we don't want 7' pull-cords, the speed is stuck at full-tilt, which is no good. The fan has separate switches on the wall for lights and fan on/off, though, so I tried putting a dimmer switch on the fan. Can that do any damage to the fan's motor, or is there anything else I'm not thinking of that could be a problem? I've noticed the fan makes a little bit of a groaning noise when I have the rheostat down, but since I've never heard the fan at slow speeds, maybe that's normal.

To find out if the dimmer can work with the fan, you'll have to inspect the dimmer. For this, you'll have to remove the cover plate and possibly pull the switch out of the box (in which case, make sure you shut off the power at the breaker). If you see the text "For Incandescent Only"; or something similar, you should not use this dimmer with a motor load. 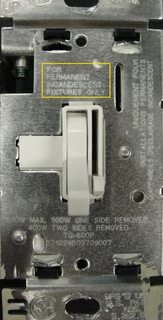 Using a standard dimmer with a ceiling fan can damage the motor, and/or cause the dimmer and/or motor to overheat and cause a fire.

There are a few better options available to you.

There are many different fan control switches available; with a wide range of styles and functions, you should have no problem finding just what you want. A simple control like this 3 speed fan control, will run you about 20 bucks, and installs using the existing wiring. 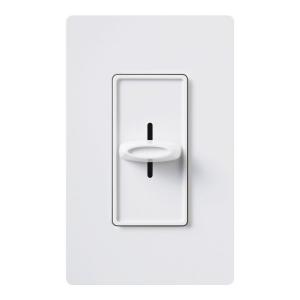 If you're up for a bit more wiring, there are universal remote control kits available. You'll have to wire the receiver into the fan housing, so it's a bit more complicated than installing the wall control. But once the receiver is installed, you can place the wireless remote anywhere you like. There are a ton of these things available, so you shouldn't have any trouble finding one you like. You can even get a cool touch screen control, if that's what suits your fancy. 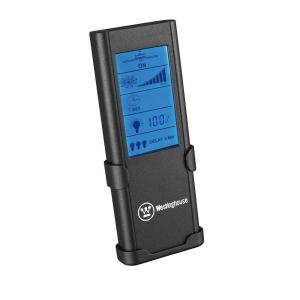 If installing a new fan is an option, you could simply select one that comes with a remote control.

Use a fan control (dimmer designed specifically for fans) on the power supply to the fan.

Common AC electric motors have a high low impedance on starting because velocity is 0, This draws a large initial current to get the motion started and as velocity increases impedance drops increases and the current draw decreases.

A dimmer will reduce the wattage voltage to the fan motor meaning that you are increasing the impedance over time, meaning that heat will buildup until it becomes a potential fire hazard. This is the same reason that you shouldn't use a normal dimmer switch for incandescent bulbs as they have a large initial current draw.

This explanation is wildly inaccurate. Any kind of dimmer--rheostat, variable transformer, solid state control--will reduce the voltage supplied to the motor. What happens when you reduce the voltage? At the instant of reduction, motor speed has not yet changed, so its back-EMF and therefore apparent impedance is unchanged. Consequently current decreases proportionally with the voltage decrease. Decreased current means the motor produces less torque. The torque requirement of the load at that speed hasn't changed, so the motor begins to slow down.

As the motor slows, its back-EMF decreases. This reduces the apparent impedance of the motor, so current increases and the motor produces more torque. This speed-slowing/torque-increasing continues until the motor "settles" at a speed where it produces the torque required by the load at that speed.

Whether or not this overloads the motor depends on two factors. One factor is the design of the induction motor, which determines its speed-torque curve:

The other factor is the type of connected load. Constant-torque loads (positive-displacement pump, traction drive, etc) require the same torque to drive regardless of speed. Variable-torque loads (fans, centrifugal pumps) vary according to the square of the speed.

If the motor is NEMA design B, for example, speed will not decrease very much. The motor will settle at a slightly reduced horsepower/wattage output with an increased current draw. The design of the motor prohibits speed control by voltage reduction.

If, however, the motor is built with a high rotor resistance, its torque curve will look like NEMA design D. If, further, the motor is connected to a variable-torque load, it will settle at reduced horsepower and reduced current draw as voltage is decreased.

...and that is exactly what you have in a ceiling fan: an arrangement specifically designed to permit speed control by voltage reduction.

Normal dimmers are for incandescent bulbs. (How many things can maple_shaft get wrong in one answer?) The reason they should not be used with ceiling fans has nothing to do with induction motor starting current. The best explanation I can find is here. Compared to a normal incandescent-only dimmer, a fan control will

Common AC electric motors have a high impedance on starting because velocity is 0, This draws a large initial current to get the motion started and as velocity increases impedance drops and the current draw decreases.

A dimmer will reduce the wattage to the fan motor meaning that you are increasing the impedance over time, meaning that heat will buildup until it becomes a potential fire hazard. This is the same reason that you shouldn't use a normal dimmer switch for incandescent bulbs as they have a large initial current draw.

In other words, don't do it. They make smart switches that can sometimes do this in a safer way.

I don't know but I suspect a dimmer is a bad idea, but you can get 3 speed fan controls that are designed for this purpose. For instance this one.

Under powering can certainly damage electronics, including motors.

It's possible, though, that your fan might be fine.

I would look for a fan designed to be used with a dimmer, find out what kind of dimmer it needs. Alternatively, many fans have their own integrated speed controllers.

I know this is an old forum posting but thought I'd add to this topic with my experiences.

I'm no expert on this but I tried putting a 3-way fan switch on an older fan kit only to hear a non comforting noise coming from the fan motor after speaking to an expert I was told that the older fan's and motors weren't designed for those type of switches and would burn the motor up.

This is an old topic now but still showing up pretty high in search results. Lutron now has a whole product line around fan control switches. Here is the Diva model: http://www.lutron.com/en-US/Products/Pages/StandAloneControls/FanControls/Diva/Overview.aspx

They have other models too, you can match it to your existing dimmers.