Sharing Neutrals - How To Correct?

I have a 12/3 NM cable landing on two separate 20 amp breakers sharing a neutral between the two. They are landing on a Dishwasher/Garbage Disposal outlet.

I understand this is NOT to code since there is no tie bar between the two breakers (confirm this WOULD be to code if this was the case).

I’m not an electrician, but I understand this to be legal only if shutting one breaker down forces the other to also be closed.

This is a remodel, what is my best practice in this case?

Should the panel be rewired where this condition exists, and there are several in here, land next to each other at the panel then simply use tandem connected breakers with tie bars?

Or, should I simply put a note in the panel to use caution, shared neutrals exist to warn a potential workman of the danger? (I guess this wouldn’t hurt!)

The remodel does not include significant rough electrical. I’m trying to decide if this expense to re-wire the panel is justified in this case.

I have updated the panel photo to reflect the proper slot identification. 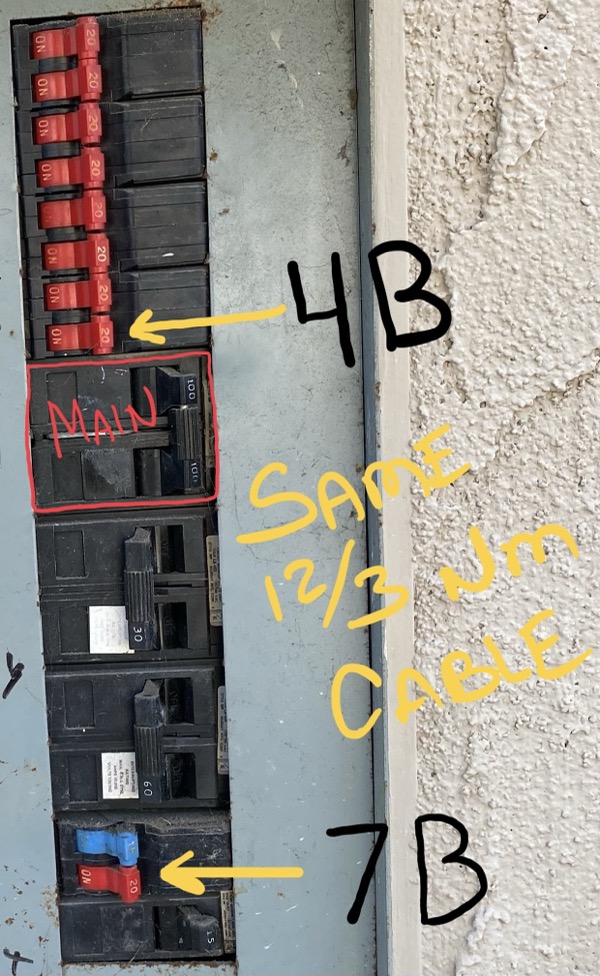 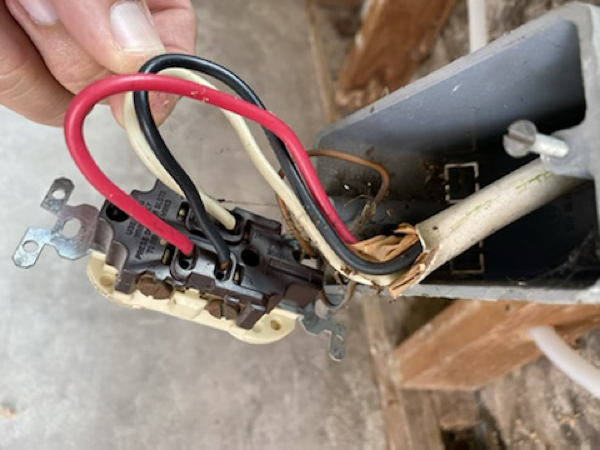 Your correct solution is to combine these hots with an appropriate double breaker in the middle of a quad breaker, such as this Siemens QT breaker: 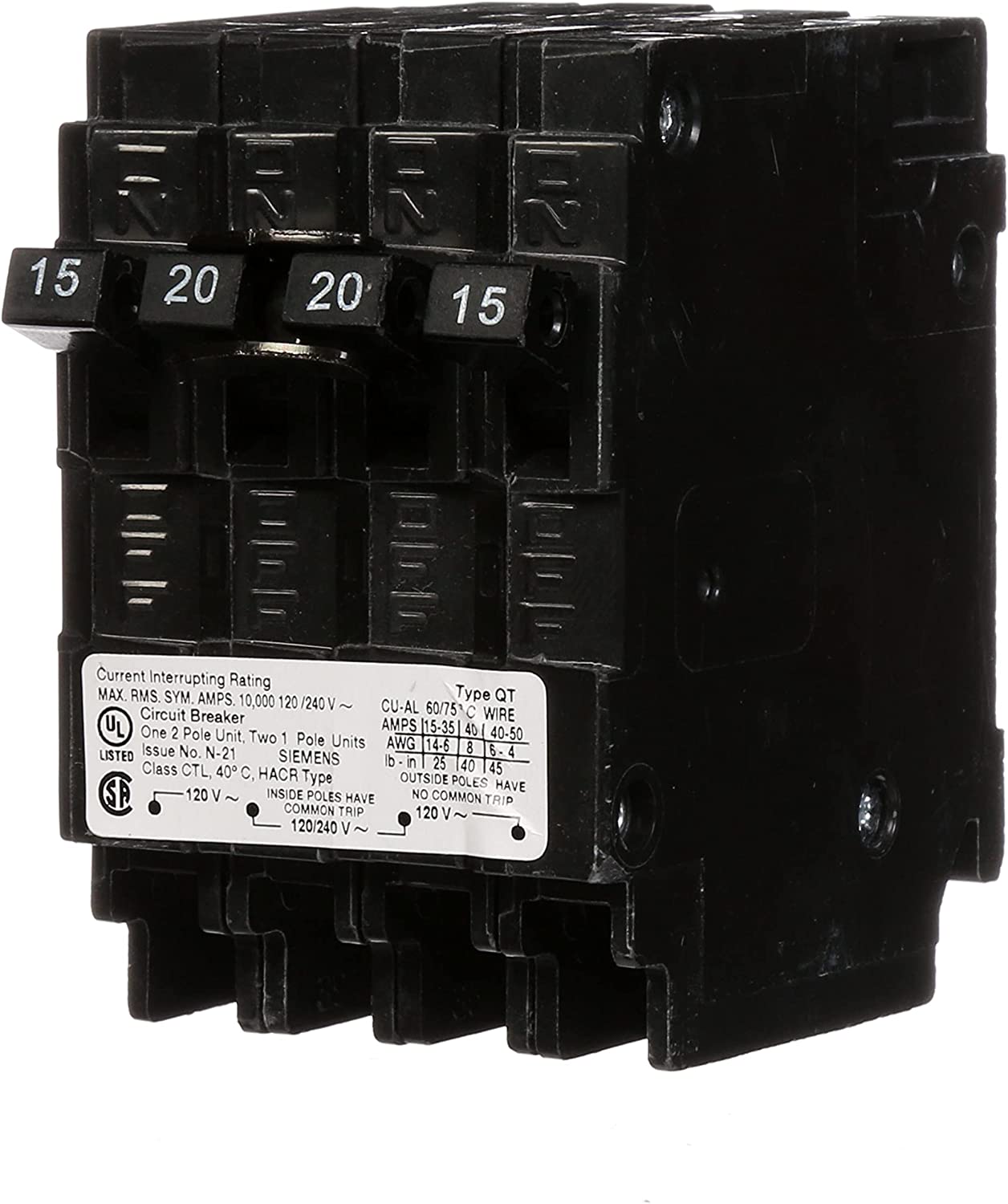 If you put this in place of the 15/20 and the 15 below it, and move the upper hot to the lower half of this 20, you gain an extra 20 above (where you moved the hot wire away), and the double-breaker takes care of the MWBC common shutoff requirement.

Note that I am not saying that this is the correct breaker for your panel. You need to check the panel labeling to make sure that it can take this type of breaker (or its predecessor, as the panel is older) and that the panel can take tandem (and in this case, quad, but this issue is how many tandems and where they can be placed) breakers in that location.

I understand this is NOT to code since there is no tie bar between the two breakers (confirm this WOULD be to code if this was the case).

Correct. This is called a "Multi-Wire Branch Circuit" or MWBC. Yes, circuit singular. A MWBC is one circuit for safety purposes. (though for for the provisioning rules, you can treat them as separate, e.g. 1 MWBC an power 1 kitchen receptacle "circuit" and 1 bathroom "circuit").

Should the panel be rewired where this condition exists, and there are several in here, land next to each other at the panel then simply use tandem connected breakers with tie bars?

Well not TANDEMS, for Pete's sake!

But yes, this needs to be done. Leaving a note is a terrible idea, most people have no idea what a MWBC is and will "don't understand, don't care".

I would also argue that moving breakers around is hardly "rewiring", it should be super easy. Worst thing you might need is a few wire nuts and extra wire for pigtails, in case the provided wire is not long enough. (some builders obsess with clipping all wires as short as possible, bad idea).

However all your breakers are "double-stuffs" except a few 2-pole breakers. So this is a problem because you need to find a way to do it with tandems after all. Doxylover covers one way to do it: with Quadplex breakers, which are paired tandems that correctly access both poles and give an "inner" and an "outer" 240V breaker. Those will work nicely.

The other way is manufacturer-specific. Some have a "handle tie" that works between TWO tandem breakers (so 4 throws). **This "ties" the inner handle on each breaker, sort of like a quadplex with only the inner handles tied. You can stack those indefinitely- so you can go like this

Giving two single breakers (2A and 6B) and four handle-tied pairs. There's a practical limit to how many you can hold together when fitting it into the panel, LOL!

However you must use THE correct breaker type for your panel. Breakers are NOT interchangeable across brands. I think in the 60s they were copying each other's designs, but patent infringement suits forced everyone to make their bus stabs a different shape. As a result, alien breakers won't engage the bus properly, and will arc and destroy the bus stab, if not the panel, if not the house.

Get us any information off the stickers off your panel - there may be important stickers on the backside of the deadfront cover. (the one that does not fit properly). From that we can identify the proper modern breakers approved for your panel. They don't cost a lot, $5 per pole before the weird shortages started happening.

The panel cover seems to be fitting extremely poorly. I imagine you've had a few outlet and switch boxes open in your career, and you've noticed the box is often sunk into the wall, and the system is designed to accommodate that. And you see an sunken service panel and you think "that must be fine too". Absolutely not. Service panels cannot be sunk. The lid won't fit properly and the breakers will fall out. The cover's proper positioning is the ONLY thing that keeps breakers in place. The edge of the breaker needs to catch the lid.

So do whatever - mill out the interfering stucco, or shim the panel out so it's flush. That lid needs to go on properly.

Not the answer you're looking for? Browse other questions tagged electrical wiring electrical-panel neutral mwbc or ask your own question.

33
What is a tandem breaker (aka duplex, cheater, twin, double-stuff, etc.)?

1
Can I install tandem breakers in this panel, and would one 20 ampere circuit be enough for a garage?
1
How to fix two circuits in one junction box sharing the same neutral?
2
10/3 Aluminum 20A with multiple electrical circuits? What is correct wiring?
2
2-pole 30 amp breaker into two individual 120 receptacles?
1
Two breakers sharing same neutral?
4
MWBC exists, use for bathroom?
8
Can someone explain this Tandem Breaker Setup to me?
4
Alternatives to replace tandem single pole MWBC breakers?
5
MWBC with both circuits on the same bus -- any easy fixes?
0
Changing Tandem Breakers with Potential Unmarked MWBC