Do I need to replace this old telephone wiring?

My house was built in 1965, and I am not sure when this wiring is from. I haven't had internet connection issues in the past. When I upgraded to the AT&T Fiber network due to working from home, the Fiber installer mentioned that this wiring appeared to be old and was amazed that I didn't have issues with my old connection.

Is this electrical phone wiring configuration fine as-is? How would I go about getting this updated if needed? I would most likely outsource this as I do not trust I could fix/update this myself correctly! 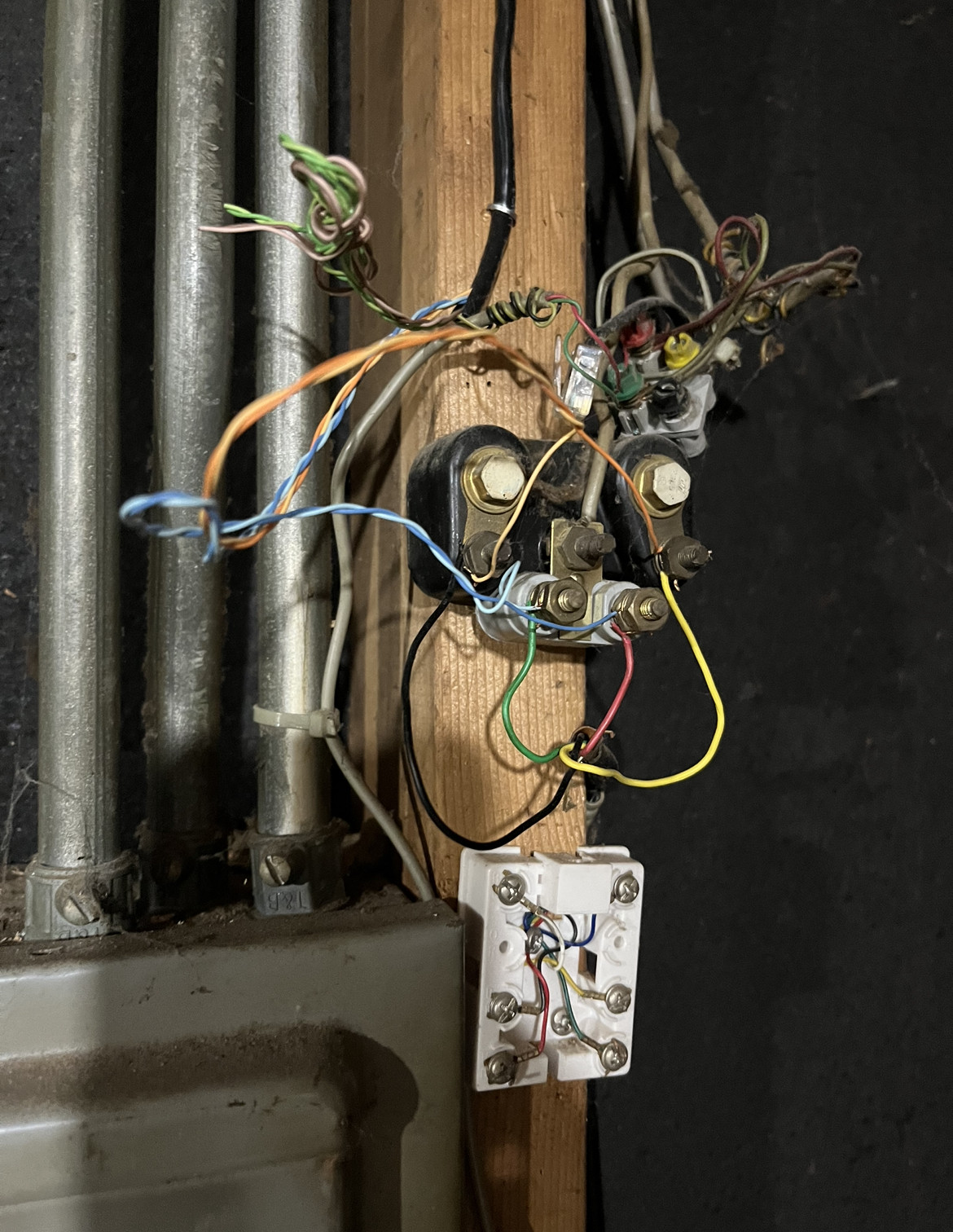 Thanks for any insight and help.

Fairly bog-standard telephone wiring - I've debugged far worse. The major clean-up would be removing the parts not used, which are commonly just abandoned in place, but there's no practical need if you don't have a landline, or if your landline (almost certainly now fed by your fiber connection) works. With Fiber internet, this has nothing to do with your internet, and would only have had anything to do with your internet if you had DSL service before (which tolerates a good deal of normal phone wiring, or it wouldn't work.)

The big black thing is an old telephone company interface block. That probably stopped being the interface 3 or 4 decades ago when they moved the interfaces outside the house, since I don't see the fat black drop cable that usually was connected to those here.

If your phone comes from fiber now, the phone interface is at the fiber box now. Some wire from there presumably connects here, and the other phone jacks in the house also connect here.

The wiring suggests that there is or was an alarm that could "seize the line" wired in, usually on an "RJ31X" jack. That alarm may or may not still be in service, but the wiring of the cable just between the black interface block and white jack appears consistent with that application, rather than two phone lines. So the alarm would be on the other end of that cable. Oddly, there's also a parallel connection on the black cable stapled to the stud above, so either there are two, or one of those is the feed from your fiber interface now.

The gray part hanging in space above and to the right of the black interface is a stock Telco connector type that usually has something (a mounting/backing plate) it can be pushed into so it's not floating in space nearby. Older connectors behind it in too much shadow to be sure of.

To make it super tidy, sort out if you still are using the alarm jack or not, and where service gets here from your fiber interface. Isolate all the wires that actually still lead somewhere useful, and note which ones are on blue or red, and which ones are on light blue (or white with blue) or green, and connect each of those sets together.

If the alarm jack is in use, or one of those cables is the feed from the fiber box, you'll need to keep the orange or yellow and light orange (or white with orange) or black separate from the red/green blue/white pairs.

You can buy "special telephone wiring parts" (such as a small 66 block or other telephone distribution block) for that purpose, or you can do it by any other acceptable means. POTS wiring will work fine in wire nuts, if the wire nuts are the correct size and correctly applied, or in crimps, but something in the wall-mounted line is generally going to be tidier. You might be able to repurpose the gray block to do more if the mounting plate is handy, or you can use the screw terminals in the jack if you like.

Stock practice which was followed on some, but not all the cables is to wind the unused pairs back along the cable so they are available to be used later, but not making a mess like the green and brown pairs from the black cable above are.

It would be a simple task to clean that up. If you can count to 4 I bet you could do the job.

It is not neat and workmanship like work so in that area it would violate code.

When cleaning old messed up wiring like that I use a special alligator crimp made for telecom circuits stuff the wires in and crimp. The ones I use can take up to 6 wires so you may need to jumper some together,

Everything connected to green gets 1 crimp, then the red get a second crimp, then black and last yellow. With the old 2 pair that’s it If there was an additional pair they would get a crimp of their own. That removes the old brass terminal blocks and ends up looking much better.

Not the answer you're looking for? Browse other questions tagged electrical wiring data-wiring internet fiber-optic or ask your own question.

7
How do you ground residential network equipment?
3
To rewire or not to rewire
1
Why would a single receptacle fail after updating other wiring?
2
How to set up home network w/ fiber from street & unterminated Cat5e in garage
0
Retrofit apartment for gigabit internet
6
Is there a way to fish a cable (network) using an existing one as a guide?
2
Wiring ethernet cable from AT&T fiber Modem to a specific room
4
Connect Network Expansion Board/Patch Panel to Router
1
Cat3 from Verizon ONT to Old Bell Atlantic Panel
0
How to upgrade apartment's power grid to protect my electrical devices