How do I replace a wooden fence post that was set in concrete?

I need to replace a wooden fence post that was set into concrete. The post has snapped through rot at the base and the rot has set in so far that the post snapped about 2 inches beneath the surface.

I had contemplated digging out the concrete to set in a new post (again with concrete) but have found the concrete is part set into submerged wall beneath the surface of the soil. The house is Victorian, I'm not quite sure what the purpose of the wall is. 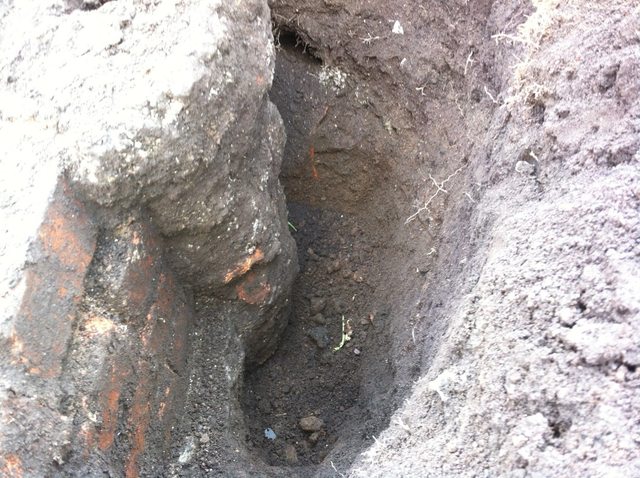 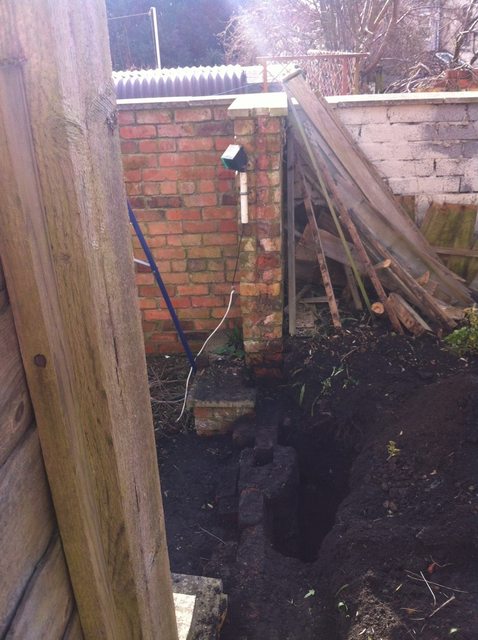 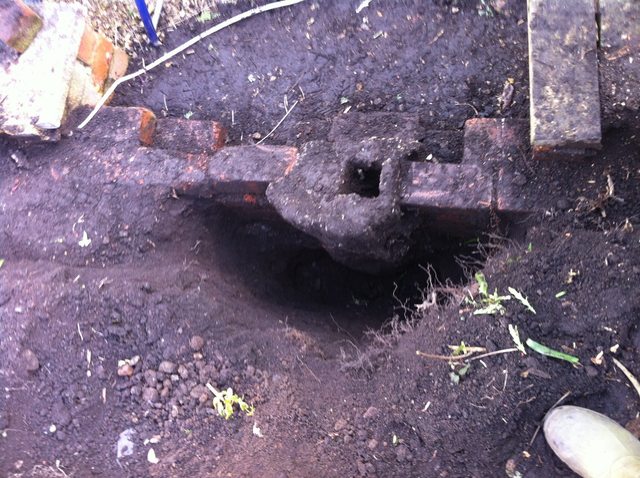 I just went through the process of removing a broken-off fence post without removing the concrete pier. Tough job! I expected it would only take a couple of hours, and that replacing just the post would be easier than digging out and breaking out the old pier, disposing of the concrete, and pouring a new pier. Maybe not, though, especially if the old post is not rotten clear to the bottom of the hole so that it breaks apart easily. But I digress. What I need to relate here is how I got the post out.

First, I carefully pulled out the nails that attached the fence to the post. I could have cut them off with a reciprocating saw, but I could get to the nails pretty easily and so I just pulled them. The post, then, being broken off that ground level, just fell over. I used a piece of 2x4 and C-clamps to clamp the two pieces of fence together to keep them from falling over.

Next, I dug the dirt and debris out from around the top of the pier and used a shop vac to clean that up so that I had nice unobstructed access to the part of the post still buried in the concrete. I used a 2-9/16" drill (kind of expensive) with an 18" extension to bore all the way down to the bottom of the post (about 24") and vacuumed out all the resulting wood debris. You will need a pretty substantial electric drill to do that, by the way. Your battery powered drill will probably not be up to the task. Getting the drill going was harder than I expected because the broken off top of the post was not flat and I couldn't cut it off flat because it was broken off below ground level. Consequently, the drill bit bucked around a lot trying to get some wood to bite into. I finally got the drill started, though, and after that the drilling went pretty smoothly. The drill bit was pretty much trashed by the end of that, by the way, but oh well.

Having drilled out most of the post, I expected to be able to work a crow bar between what remained of the post and the concrete pier and break out the rest of the post pretty easily. Not so easy, though, and in the end I could only break the post out down about 13" below ground level. Below that, I couldn't get enough leverage with the crowbar to break out anymore of the post. Also, I couldn't manipulate the crowbar into the corners of the hole to break out the pieces of the post that stuck to the concrete at the corners. So, not only could I not break out the entire post (i.e., down 24"), but I couldn't even get a totally clean hole down 13". Pretty clean, but not sufficiently clean that a new post would just slip down into the hole without some trimming.

I read somewhere on the web that you can burn a post out. The website even had a picture showing a little pile of briquettes piled up around a broken off post. Given that the post is wood, burning it out didn't seem like an unreasonable thing to try. I did realize, though, that I would have to get oxygen down into the hole to keep the fire going, and so I hooked up a small fan I use with my Big Green Egg barbeque (duct tape works wonders) to a piece of 1/2" galvanized pipe, stuffed the end of the pipe down the hole, filled the hole with charcoal, and fired it off. That REALLY made a hot fire, literally roaring. Sounded like a blast furnace. My idea was that the charcoal would get the fence post burning, and then all I would have to do is keep the air going into the hole and eventually the post would burn itself up. Well, I kept this roaring fire going for 2 hours and at the end of it the post was absolutely unscathed! Barely singed it! Didn't even burn out the pieces of the post that stuck to the corners of the hole. Also, when I said I had a roaring fire going, I meant it. There was enough heat coming out the hole that the fence itself caught fire. Fortunately, I had anticipated that possibility and had a squirt bottle and a hose handy. Anyhow, burning the post out didn't work worth beans.

In the end I decided that getting the new post down 13" was probably sufficient, and so I used my belt sander to round the corners of the post (remember, there were still pieces of the old post stuck in the corners of the pier), slipped it down the hole, filled the space between the pier and the new post with sand, and then nailed the fence back to the post. You will probably want to drill pilot holes in the old fence because the wood is probably about shot and won't take a lot of abuse. Anyhow, it's all back together and it looks like it will last another couple of years until my neighbor and I decide to replace the whole fence.

An additional thought: I used a piece of finished 4x4 for my post for a couple of reasons that we don't need to go into here. Suffice it to say that a finished piece of wood is a little smaller than the original post, and so I had little space between the new post and the concrete pier that I just filled with sand. If you use a treated post or a regular fence post, you will probably have to sand or plane it down a bit to get it to slide down into the hole, and then, as I did, you will have to fill the space between the post and the pier with sand. You DO, by the way, want the post to SLIDE down into the hole. If it is a tight fit and you pound the post in with a sledge hammer and you then need to take it back out again for some reason (maybe it didn't go in quite plumb, for instance) you will have a whole new problem to deal with (ask me how I know that.).

So, the bottom line is if you want to take out a broken off post without taking out the concrete pier, it can be done...sorta. At least you can get out enough of the broken post to set a new one. But if your broken off post goes down 18"-24" below grade and you want to get the whole thing out, you may not be able to do that. At least, I wasn't able to.

I would break up the concrete and redo. It'll be a lot easier to take out of the hole in chunks, or re-use as backfill. 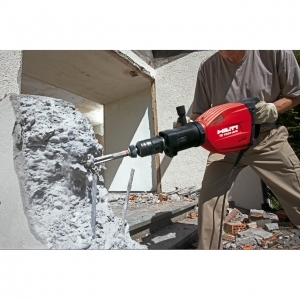 Hi I had the same issue and some similar thoughts. I tried the drilling out process with an extended drill spade bit, But could not drill all of the post out. In the end I was able to remove all of the remainder by driving a stainless steel tube down the hole cutting the rotten post out a chunk at a time. Then sliding another smaller tube down the middle of the stainless steel tube to clear the cuttings. Thanks for all of the previous posts it lead me to the solution that I developed. Photos of process

It looks like there used to be a brick wall there and then at some point the above-ground portion was replaced with the wood fence. Breaking up the concrete is the best way to go, since you have already dug down to the bottom a breaker bar and sledge hammer would make short work of it. Another option is to put a 4x4 treated post right along the wall to one side of the existing concrete, then to match the previous line you would cut another 4x4 post and use lag bolts to attach it to the one that goes into the ground (the bottom of the 2nd 4x4 would actually be sitting on the top of the brick. This solution allows you to just bury the concrete and put the fence back up.

As another option, it may be possible to dig out the wood that is currently in the concrete and put a new post in the existing socket. I did this with a rotted-out post recently. I took a rough chisel, attached a long handle to it, and then used it to split out the remaining wood. If there was a lot more wood, my plan was to drill it out.

This worked because there was a plug of wood near the top, but the bottom of the hole had totally rotted away.

This will take a while. I did it because the concrete was integral to a wall separating the two yards, but redoing the concrete might have been an easier option.

Not the answer you're looking for? Browse other questions tagged concrete removal fence post or ask your own question.

11
How do I remove a 4x4 fence post that is snapped off at ground level?