I have a Kohler 2-piece toilet with what I think is a leaking fill valve. Basically the toilet wasn't flushing. When I opened it up, I saw the valve tubing had become detached from the canister flush valve: 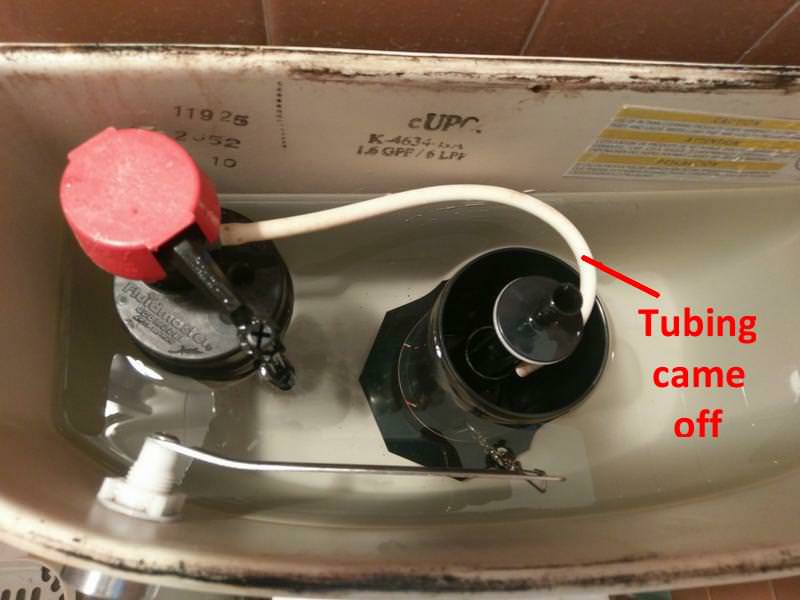 So I turned off the main valve, re-inserted the tubing, then turned the valve back on. Water began flowing normally into the tank. However, after flushing the tank once, water began leaking out of the red cap at the top of the fill valve, rather than coming out of the tubing.

If I pull the lever up, the leak stops, but once I release the water starts leaking again. For whatever reason the tank never fills and the water keeps leaking forever.

Now, if I turn off the main valve and turn it back on again, the tank fills normally through the tube. No water leaks through the fill valve. Of coure, the problem repeats if I flush again.

I tried flushing the fill valve according to this video from Kohler: https://www.youtube.com/watch?v=oD0HETCc-OQ, but the problem persists.

Does anyone here know how to stop this leak and make the water go in through the tube again?

The valve probably has particles keeping the valve from sealing correctly or the seals have worn out. There are replacement parts for this flush valve at many home stores but you'd be better to just replace the entire valve. The valve parts can break easily if you're not familiar with how to disassemble and reassemble. You'd need Kohler Genuine Part Gp1083167. I'm not affiliated with Kohler in any way.

Sounds like symptoms of "hard water" residue on the valve.

With water shut off use a large syringe to backfill the white hose with KLR then pulse the valve until it seals. This ought to loosen the lime deposits after a few hours.

2
Problem with toilet fill valve
5
Why does this toilet fill valve leak around the top?
5
What could be causing the filler tube of a toilet to be leaking/bubbling?
2
How to secure toilet fill valve hose to canister
1
Toilet occasionally runs shortly after flushing
0
Toilet tank fills after Shutoff valve is off and FluidMaster fill valve also is off
1
Toilet fill value hissing and dripping after it reaches the stopping level.
1
Toilet won't fill if water supply is on high
0
Dripping sound in wall after toilet fills
2
Toilet only leaks when supply is on