I bought a new dryer today and upon plugging it in it wouldn't turn on. I tested the wires on the terminal block with a multimeter and one of the hot legs to the neutral wire reads 240 volts and the other hot leg to neutral reads 0 volts. As I understand it both of these should instead read 120 volts.

I swapped out the power cord for the power cord from my old dryer which worked perfectly fine and got the same readings, so I believe it is an issue with the terminal block itself. The dryer was discounted due to "repaired control board" so is it possible that the repair was not properly done? Does anyone have any idea what might cause this and how I can fix it?

Below is a picture link showing all of the multimeter readings I took. 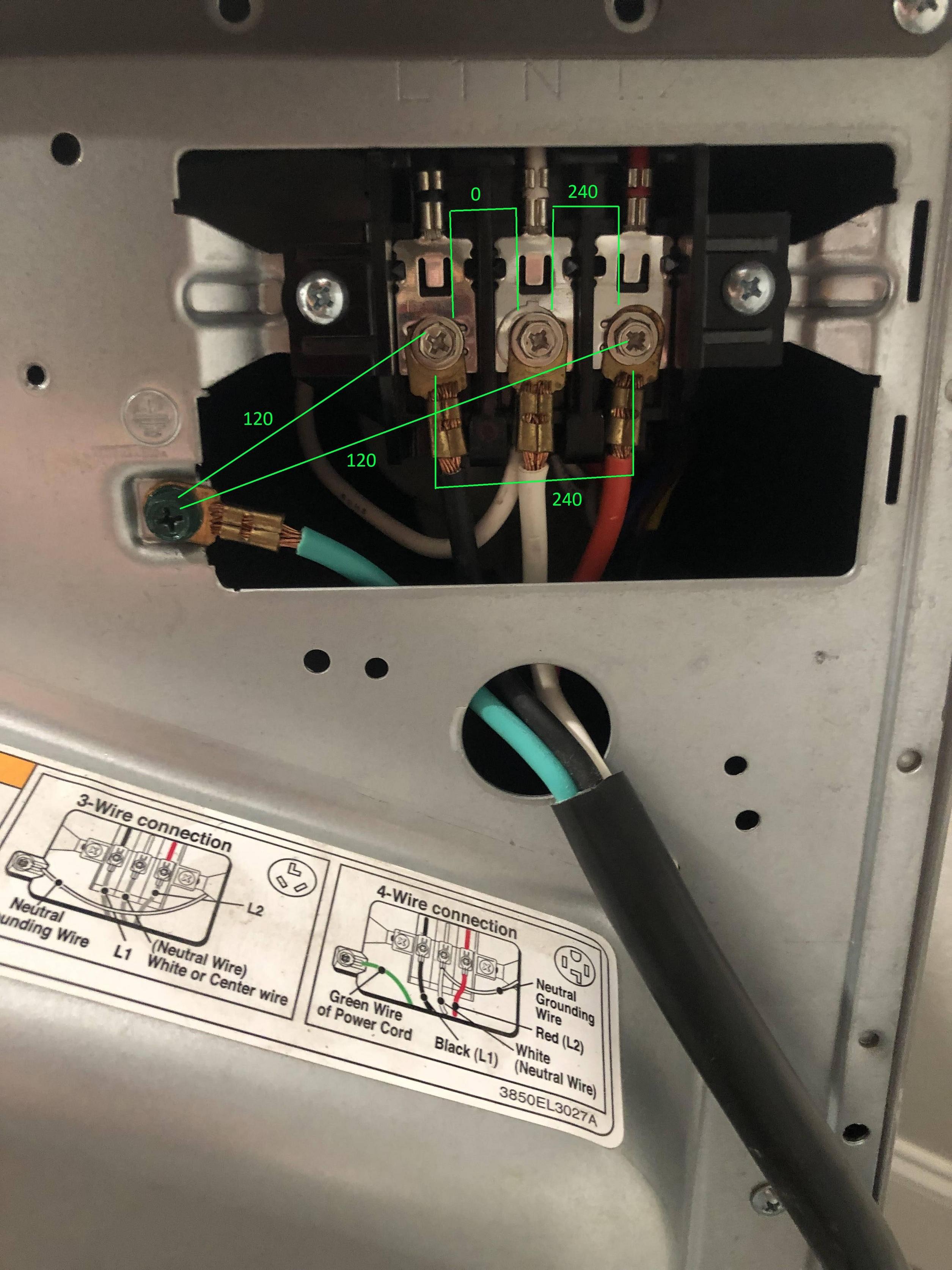 Based on the picture and description, the only thing that makes sense is a short between white (neutral) and black (hot 1). There are a few different possible places for the problem:

If the receptacle checks out OK then:

* Just saw the part about "repaired control board." Depending on specifics, even with a repair there should be a warranty, though it might 30 days rather than the full regular warranty (typically 90 days or 1 year). The problem could be something extremely simple such as a wire connected to the wrong location on the control board, or it could be a major problem such as another bad control board. I'd be a little concerned because the standard procedure for replacing a control board should include testing heater, motor, fan, etc. which would have shown the problem.

I think the neutral wire in your wall is broken or disconnected, either inside the junction box, or inside the service panel.

Checking voltage at the socket would settle this question. Expect weird voltages on the neutral wire because of "phantom voltage".

This same problem would have prevented the old dryer from working.

The most common failure point is a loose connection at the socket terminal or neutral bar, potentially causing arcing. Given the probability of arcing already having happened, you should disassemble the wire connection and inspect both the wire and the terminal for charring or pitting. Since this is often caused by incorrect torque on the terminals, NEC now requires torque wrenches to be used to set torques (the new requirement is for small terminals - large terminals always had this).

Your cable needs to have a cable clamp where it enters that round knockout, and it needs to clamp the cable jacket. As it is now is a code violation, can't just stick cables through knockouts.

here is my look at it

A says that both phase deliver 120 V each.

B and C confirm that.

D says, the L1 has somehow lost its power when measured to Neutral (which is no longer neural).

However the F says that neutral is at 120V.

If we are to believe the F measurement, the the D should also show 240 V

If the neutral was mistakenly switched inside the dryer that would explain it.

However since the Neutral now carries 120 V back to breaker panel, there must be some circus going on there. 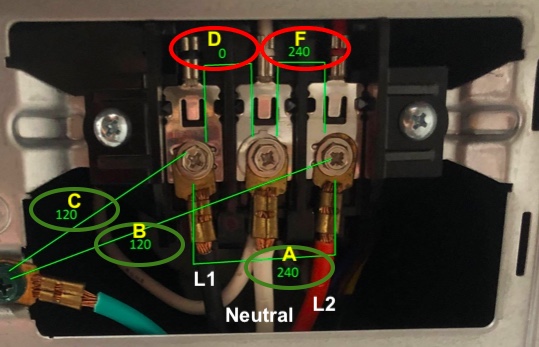 Not the answer you're looking for? Browse other questions tagged wiring dryer appliances multimeter or ask your own question.

1
Clothes Dryer electrical 240v between hot and netural, 0 between other hot and neutral
1
How can I test a three prong dryer receptacle for open neutral/ground?
0
Maytag Dryer wiring issue
1
Why is hot-ground reading a different voltage from neutral-ground?
2
Why would I have i lost one leg on 240 after maintenance guy changed 100 amp disconnect at the meter
0
3-Wire Dryer Connection Works with Dryer at Home, But Not At Other House--socket tests ok though
2
Why did the dryer stop working shortly after moving and changing cord to four prong?
1
86 volts between neutral and the electrical box?
0
GFCI outlet reads hot and neutral reversed regardless of correct wiring and successful test and reset?