Wood splitting wedge or masonry chisel okay to use for breaking up concrete?

I'm replacing a fence post which was a 4 by 4 with concrete poured around it. I have been trying to break up the concrete with a sledgehammer, which works okay but it is slow going.

Is it workable to use a wedge for splitting wood for the purpose of splitting or breaking the concrete? It seems like it should be okay but I wouldn't want to run into some problem I didn't foresee. For example, maybe it would dull the edge too much -- is that an issue to watch out for?

I know there are wedges that are specifically for splitting stones or concrete but I am hoping I can just use the wood splitting wedge which I have already.

SECOND EDIT: There are a lot of great ideas in the answers below. About the specific question about using a wood splitting wedge, looks like the answer is NO.

When confronted with this I have just drilled / pulled out the old wood from the concrete and inserted the new post into the hole. Easier than breaking up the concrete and then repouring fresh.

Masonry will help but not so much without pre-drill.

Get a hammer drill and good concrete drill and weaken the concrete by drilling holes.

That will also tell you how deep the concrete goes.

Mechanics, since the concrete sits on soft soil, the sledge hammer would just bounce off with minimal damage to the concrete.

Keep the concrete in place and get a fence post support that goes in it. Could be one with 4 screws (one in each side) or one like that: 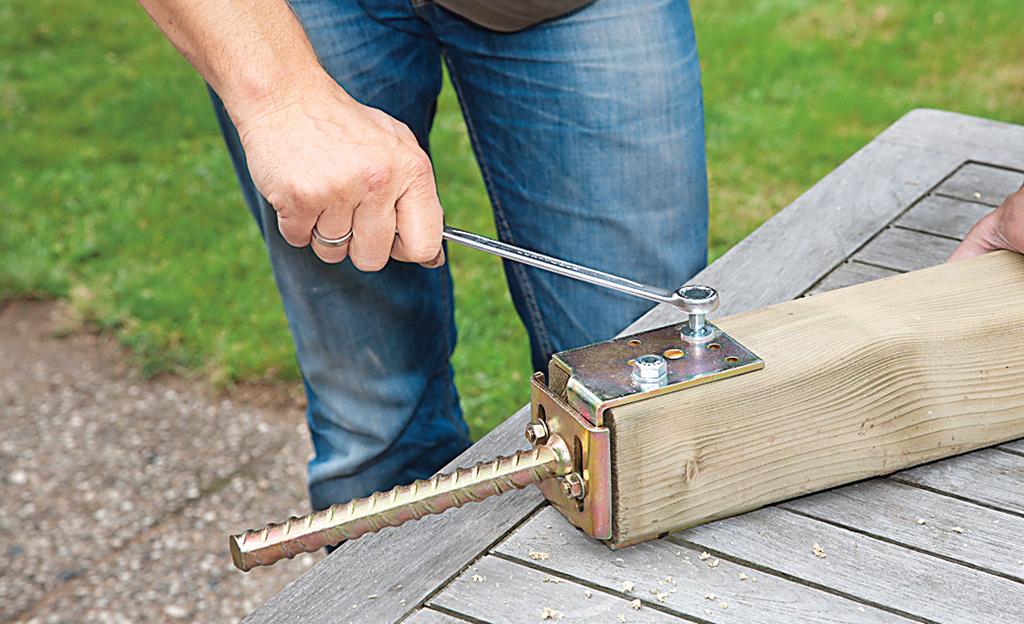 Is it workable to use a wedge for splitting wood

Yes, if you make a line of holes using a rotary hammer, then put the wedge in and smash it with the sledgehammer, the concrete block should break. But you need to pre-drill it and make a space to slide in the wedge, so it... uh, well, wedges the concrete and splits it. Otherwise of you try to bash it in, it will just bounce off.

If you really need to get out the old concrete:

I'd go for a rotary hammer (not entirely sure I got the right translation, in German we call it "Boschhammer", they are machines the size in between a drill with hammer mode and a jackhammer. You want one with hammer-only mode and a concrete chisel bit.

(If you can actually achieve progress with only the sledge hammer on a concrete block inside a hole, that does not sound like very hard concrete)

If you have access only to a power drill with hammer-drill mode (no hammer-only), you can also drill rows of holes, get out the stuff in between with the manual chisel or a crow bar, and then pry pieces apart with a crowbar or digging bar.

Over here, we locally make a serious version of crow bar/digging bar by welding the head of a pickaxe lengthwise into a steel fence post. That gives better impact inside the hole (where you cannot use the pickaxe), and also a good lever.

digging bar, possibly with the aid of a pick axe at the beginning and later your masonry chisel

It's not going to be very efficient for breaking up the concrete, plus you'll have a whole lot of work putting it into working condition for its actual purpose again.

Plus: A hard (steel) wedge in concrete means a substantial risk of the wedge jumping out of the slit/crack when you hit it, but the impact is insufficient to crack the concrete. (This is also why soft wedges like the aluminum and plastic ones are nowadays recommended for wood, both for splitting and felling). At the very least remember not to hit steel on steel.

For example, maybe it would dull the edge too much -- is that an issue to watch out for?

From the point of view of achiving your goal to destroy the concrete, it won't get duller than using the sledge hammer directly...

Wedges for wood come in very different types. Many will be far too soft for working on concrete (e.g. the aluminium plus wooden back ones).

is it workable to use a masonry chisel to break up the concrete in a post hole?

since the description of your concrete doesn't sound very hard, that's certainly an option. Depending on the size of the chisel (an electrician's chisel won't be fun...) likely much better than the wood wedge.

Once the concrete and post are out a sledge will easily remove the concrete from the post should you need to remove it prior to disposal.

IMO, your best bet is to find a way to pull out the post with the concrete intact. Then replace the post in the hole and either refill with new concrete or to pack in some fill dirt.

There are various ways to pull out the post. One way is by using a front loader, a backhoe, a forklift, or something else to pull it straight up. I've seen some videos online about using a car tire/rim and a log chain/tow cable attached to a vehicle in order to pull a tree stump. The idea with the tire is that you put the chain as close to the ground as possible and the tire redirects the horizontal pull into a vertical pull.

Once you get the post and concrete out of the ground, you can dispose of it, without having to break up the concrete, in a dumpster or by taking it to the local landfill yourself. And if you need to make it smaller, you can cut the post easily enough, or if you do need to still break up the concrete, it's much easier to deal with. You can even use a tile or concrete saw at this point, even if it's just to make stress points, like other people were suggesting to use the drill holes, which could still be done.

I would recommend against using a log splitter wedge. They are sharp because they are designed to get in between fibers or to cut across wood fibers. Rock and concrete, not so much. If you look at a new masonry bit, you'll see that it's not sharp at all. It's not cutting, but rather chipping away the material, which is why electric drills for masonry and concrete have a hammer action. You can drill through masonry and concrete without the hammering, but it'll burn up bits really quickly. Been there, done that.

Most likely, you'll dull the wood wedge in the first few blows and end up breaking off chips, so it won't even be good for wood cutting anymore (at least not without significant grinding it back to shape). If you keep using it, those chips will lead to stress cracks which could lead to large pieces breaking off at high speed, or simply just crack the wedge in half.

You can even get wedge or spade bits (also not sharp) for hammer drills/rotary hammers that are designed to use only the hammer action, not the rotary action, so it's more of a small version of a jack hammer used in road construction.

What you need to break up the concrete is shear stress, where one part of it is stable and doesn't move while another part isn't supported. Often times, this is done by the large size of the slab of concrete it's poured as, but you don't have a slab, but a column, so that's more difficult, and it has a soft core of wood to help absorb vibrations. About the only way this is going to break up is of you have a slab of concrete that you don't really care too much about or is really thick, lay the post on the slab, then support only one side, then whack at it with the sledge hammer until either you or it gives up.

Not the answer you're looking for? Browse other questions tagged concrete fence post or ask your own question.

6
Setting posts for a sturdy garden fence
11
How do I remove a 4x4 fence post that is snapped off at ground level?
3
Can I use metal brackets to install a wood fence across an existing concrete driveway?
4
Do I use dirt or gravel to fill around a cement form for a fence post?
1
What are my options for replacing a rotted fence post that is slanted in a large concrete slab?
2
What is a reasonable depth and diameter for postholes dug in clay soil to support an 8' fence?
1
How deep should a fence post be with respect to the bottom of the concrete base?
0
What is the correct tool/method for digging out existing concrete holes for fence posts
0
Fence posts too shallow on slope