Are black areas on studs of shower surround a concern or usable as is?

Gutted a shower alcove, of concrete foundation house built in 1954. To my hopeful eye, there's no sign of "toxic" moist black mold in the way it's typically depicted in photos meant to identify black mold. It's all dry. At the bottom of studs it's saturated black half way across the stud, and feels soft/weak when I push on it. Doesn't look like it spread beyond entry points.

Okay to leave in place and continue building, or need to kill, or need to remove studs entirely (not something I can do, because it's a complex wall and likely load bearing).

There is some white powdery areas on the sill plate too.

Contractors gutted the opposing side of wall and installed kitchen cabinets 5 years ago, and I'm certain it was in same conditions at that time. Wasn't a structural or environmental concern to them, or city inspector, but they didn't see the bathroom face of these studs. 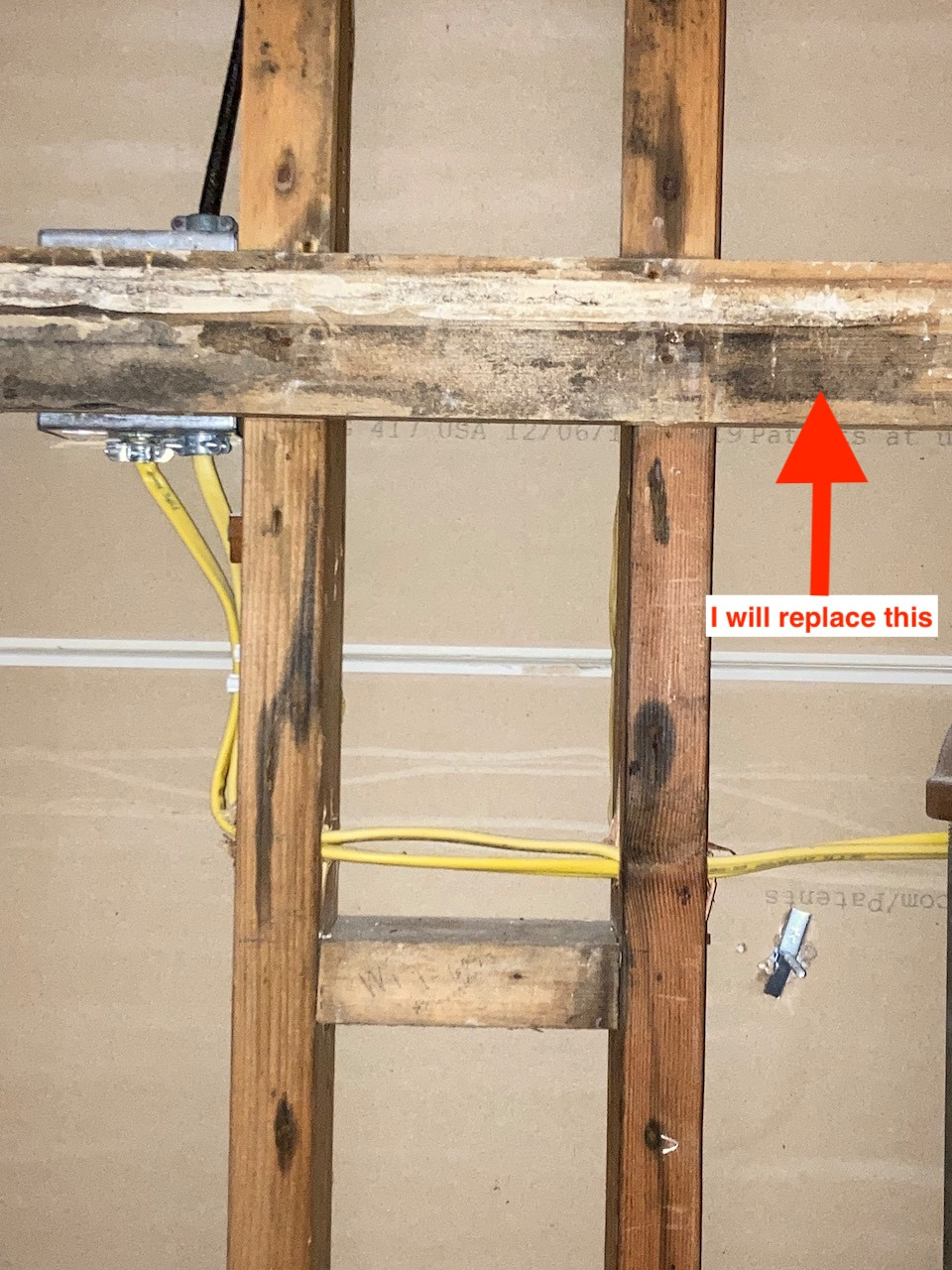 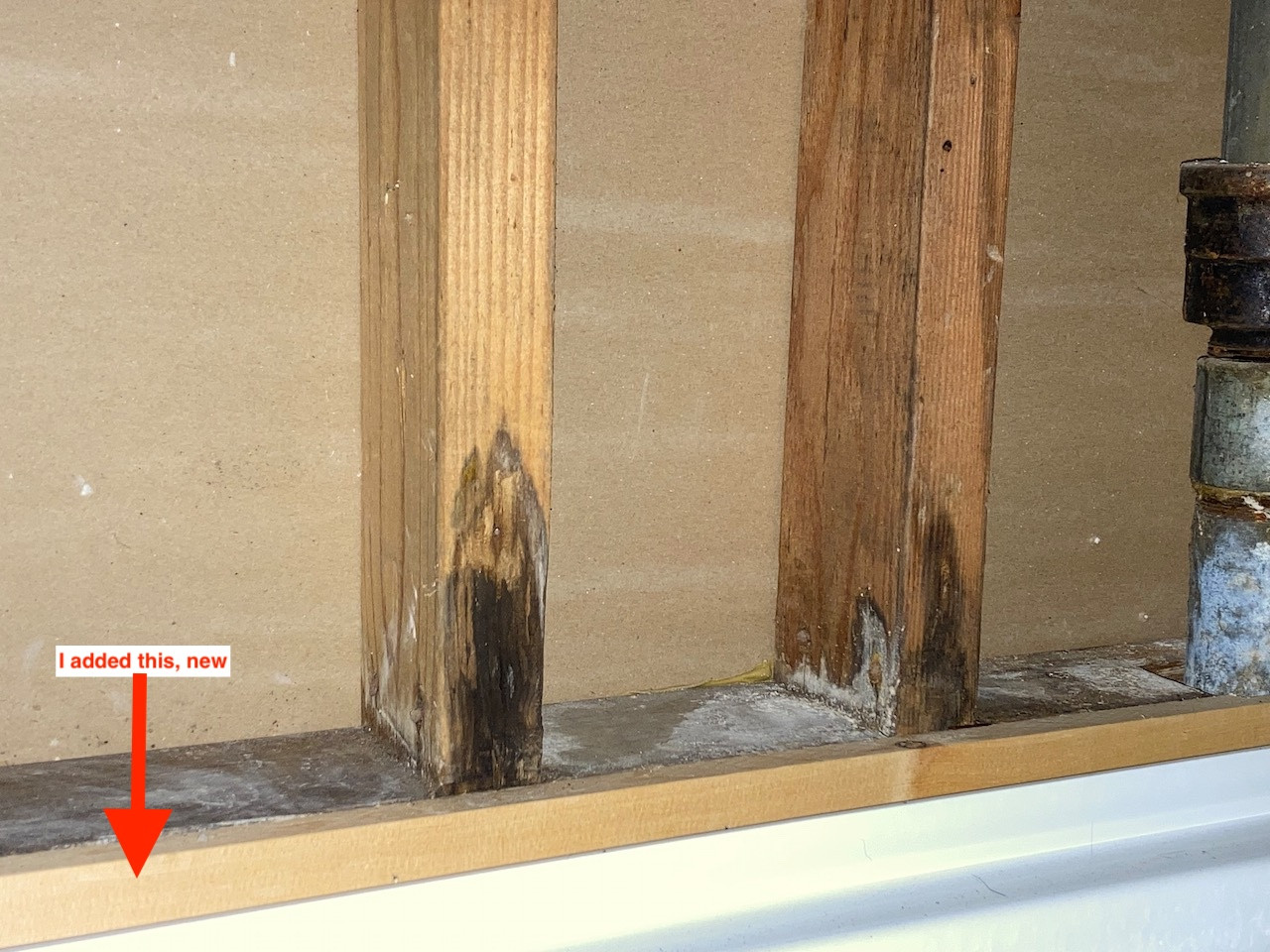 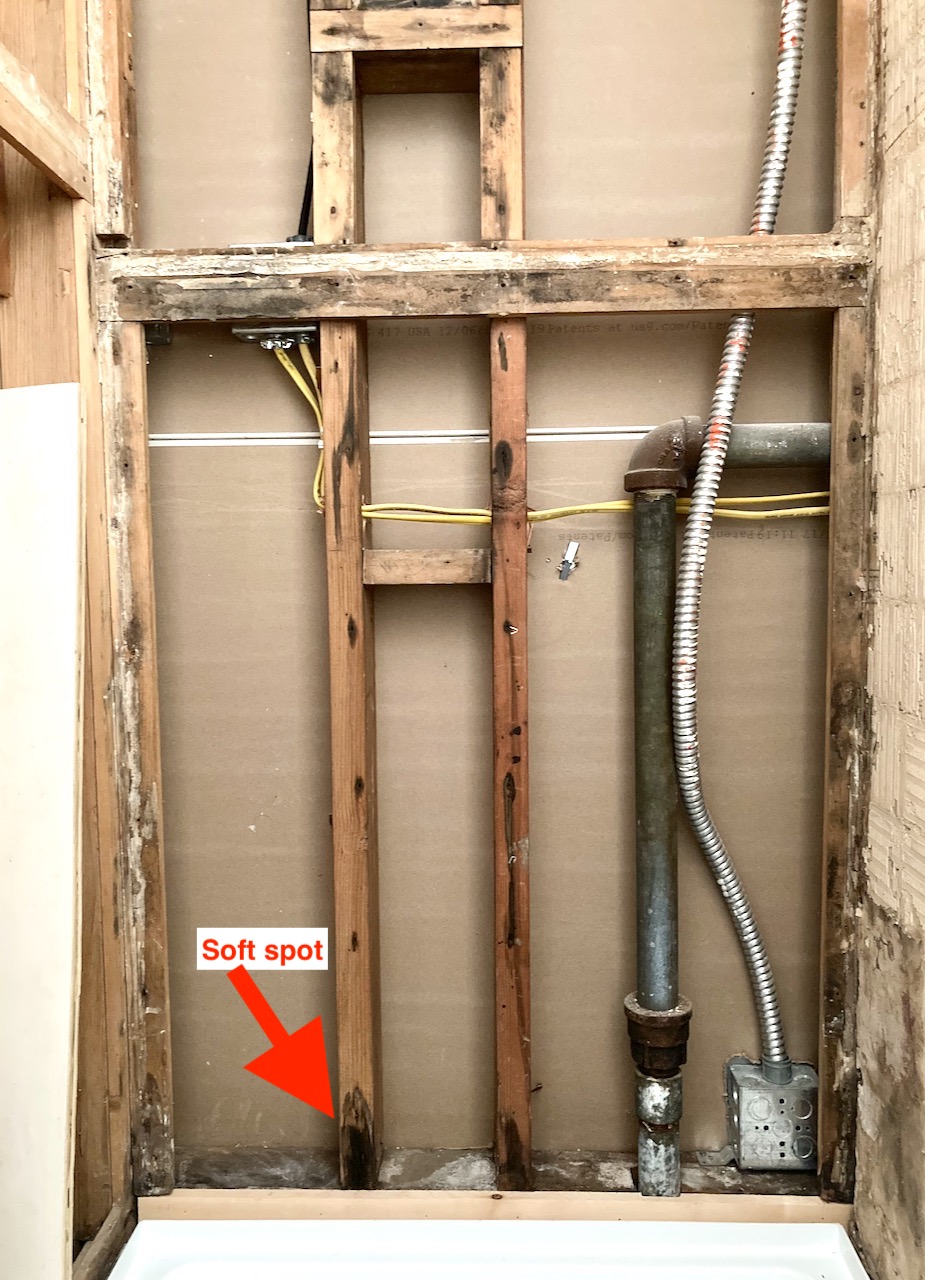 To me that looks like common staining from nails, back then they did not use screws but galvanized Sheetrock nails.

As far as the soft wood my preference is to remove it and sister , if the spot is not large there is a coating that penetrates into the wood and hardens so you have all the options.

The white on the concrete is not a problem it is usually effervescence the moisture has pulled out of the concrete.

Note all wood products are full of fungus the bad black mold is not common on the wood but is on Sheetrock that has been wet. Most mills spray the wood with biocides so the wood wonâ€™t turn black before it is purchased.

If you want to treat the wood hydrogen peroxide is a great product to kill mold and organic spores and when it is used it breaks down into water and oxygen. I use a 3% solution if needed but I would not worry about your wall it is not bad at all.

On your soft spot being directly on the concrete if wet this is an area I would pay attention to I will place tar paper or a shingle under a post or stud that is in direct contact with concrete to prevent the wood from wicking moisture, but if after 70 years this is all the issue it was probably from the shower

The horizontal plate you have noted to replace I would not, this is normal and that wood is a much higher grade than you can find today I talk about the grain in the wood or ring count, in the 50â€™s they would chip and burn much of what is called a #2 stud grade 2x4 in the 70â€™s the ring count was removed and 6 rings can make a 2x4 today and most have wane or bark or an uneven edge because the bark was removed putting in a lot of work to put less dense wood may not be as strong.

What I see is not that bad and better than most surrounds that have been removed, treat it with a stronger solution of hydrogen peroxide up to 7-8% if the color bothers you remember AAA always add acid when diluting hydrogen peroxide with water especially if using the 33-34% stuff like I do it is a great sanitizer and no bleach Oder later as some will recommend chlorine bleach to do the same.

I will take a SWAG and say I am not sure of the code but I would treat the bad spot then add another 2X4 at least 2.5' beside it and connect with screws, that should save the drywall on the other side.

Not the answer you're looking for? Browse other questions tagged bathroom walls shower studs or ask your own question.

11
How far apart are studs?
4
How to tile over shower wall surround flange?
5
how critical are distances between studs?
1
Chalkboard shower surround?
4
Shower surround - does it need adhesive?
1
Twisted Wall Studs In Tub Surround
0
Black lines in shower wall tiles join areas
0
Is this an appropriate shower surround configuration?