How difficult is a fuse box replacement?

I have both a breaker box and a fuse box. The breaker box is fine. The fuse box, not so much. Its only purpose is to power the dryer. I had an electrician come out a few years ago to see if the fuse box could be updated to a breaker box and they wanted to replace all the wires quoting code etc. For cost reasons I didn't do it.

Here is the fuse box in question: 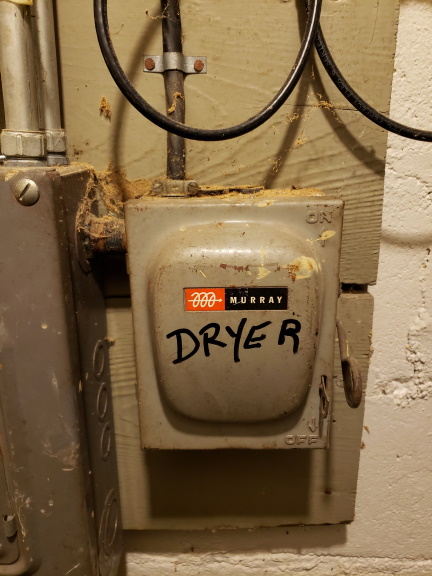 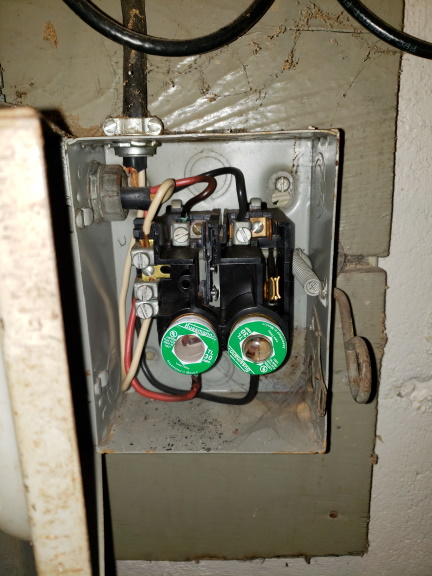 At the time I was going through a 30 amp fuse once a week. Only on the left socket. When the fuse would go out, the dryer would still run, only it wouldn't heat. I found that if I only use timed drying, the fuse doesn't blow. It was the auto mode that was killing the fuses. So I stopped using auto dry.

Fast forward to a few days ago. Dryer reported a 95% blockage. It wasn't blocked, I took the dryer apart and check both the thermal fuse and heating elements. Continuity checked out. Vent was maybe 3% blocked, cleaned it. Checked the fuse box, and there I saw the red wires were scorched with corroded copper. Never a good sign. The fuse, done for. I pulled the fuse and the ceramic disk in the fuse slot crumbled. I checked continuity and it has an irregular pulse i.e. not constant. So the box is and probably always was dead, just not dead enough to fail obvious inspection.

I found a fuse box on Amazon.

But I'm not sure if I should make the attempt or not. It looks like a 1:1 replacement. However I've never done something on this level; swapping outlets and replacing light fixtures being the closest to electrical work, and I'm reading that there are some times laws and permeants that I might need. I'm also not sure how to punch the metal circles out. The red wire is scorched, so I'll need to clean it. I'm reading that I can remove the corrosion with baking soda.

I live in Cincinnati. I would like to hire a electrician, but the last one aggressively pushed for a rewire and I'd rather not have my walls torn out and not have electricity for a week. A simple replacement is in order, but I'm worried any electrician won't do it because of what the first one said about codes etc. and I'll get hit with a visitation fee with no work.

So my big question is, how difficult would this replacement be?

Should I eat the enormous cost of an electrician? (I'd rather not) 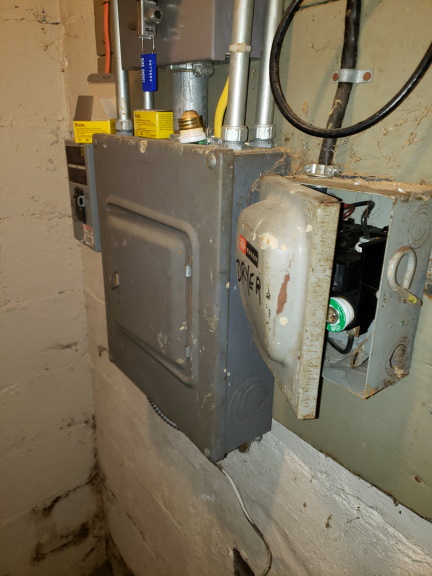 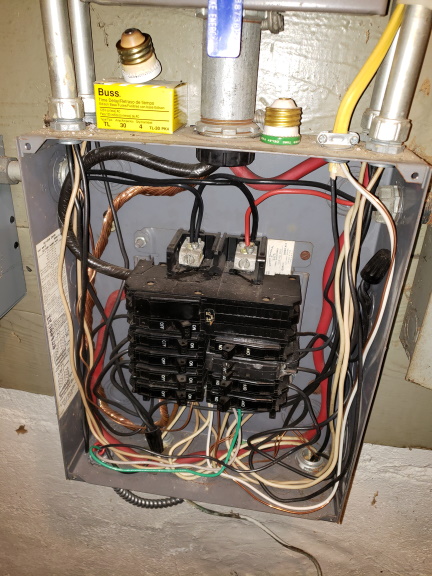 Note: This is in a somewhat enclosed space, hence the angle of the over view shot. I'm down sizing these pictures to 20% of the original. If you need higher res shots, I can add them. 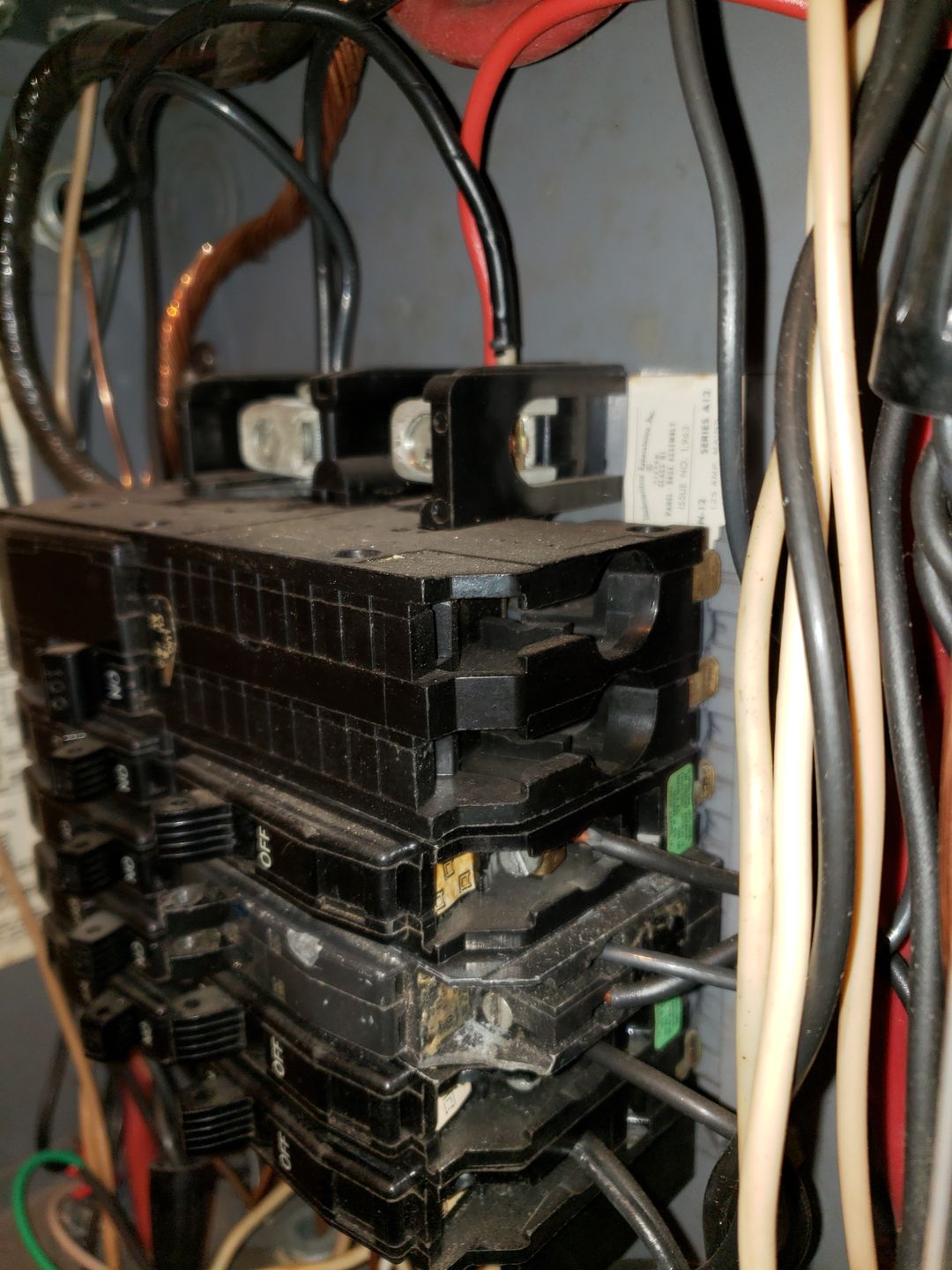 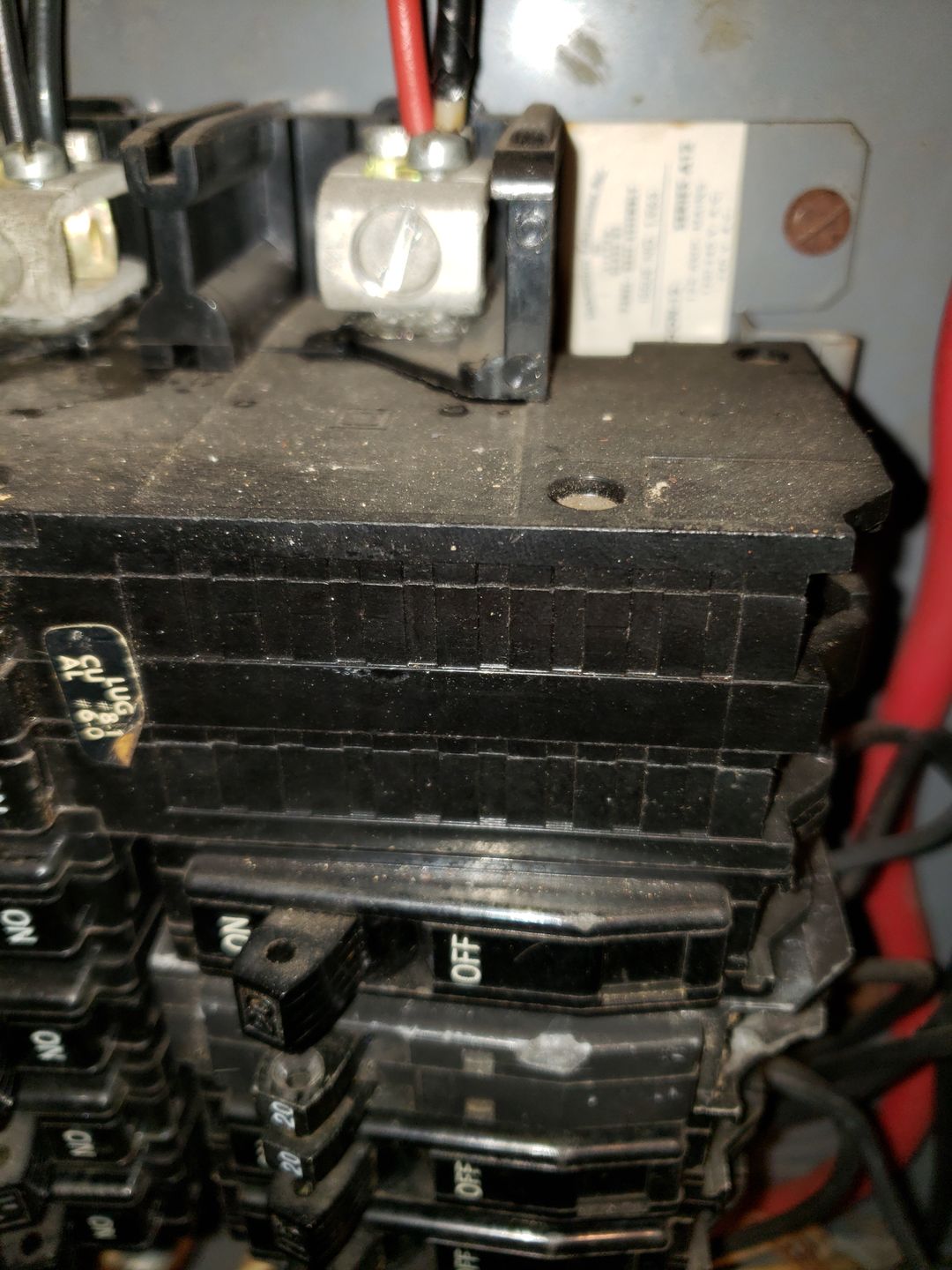 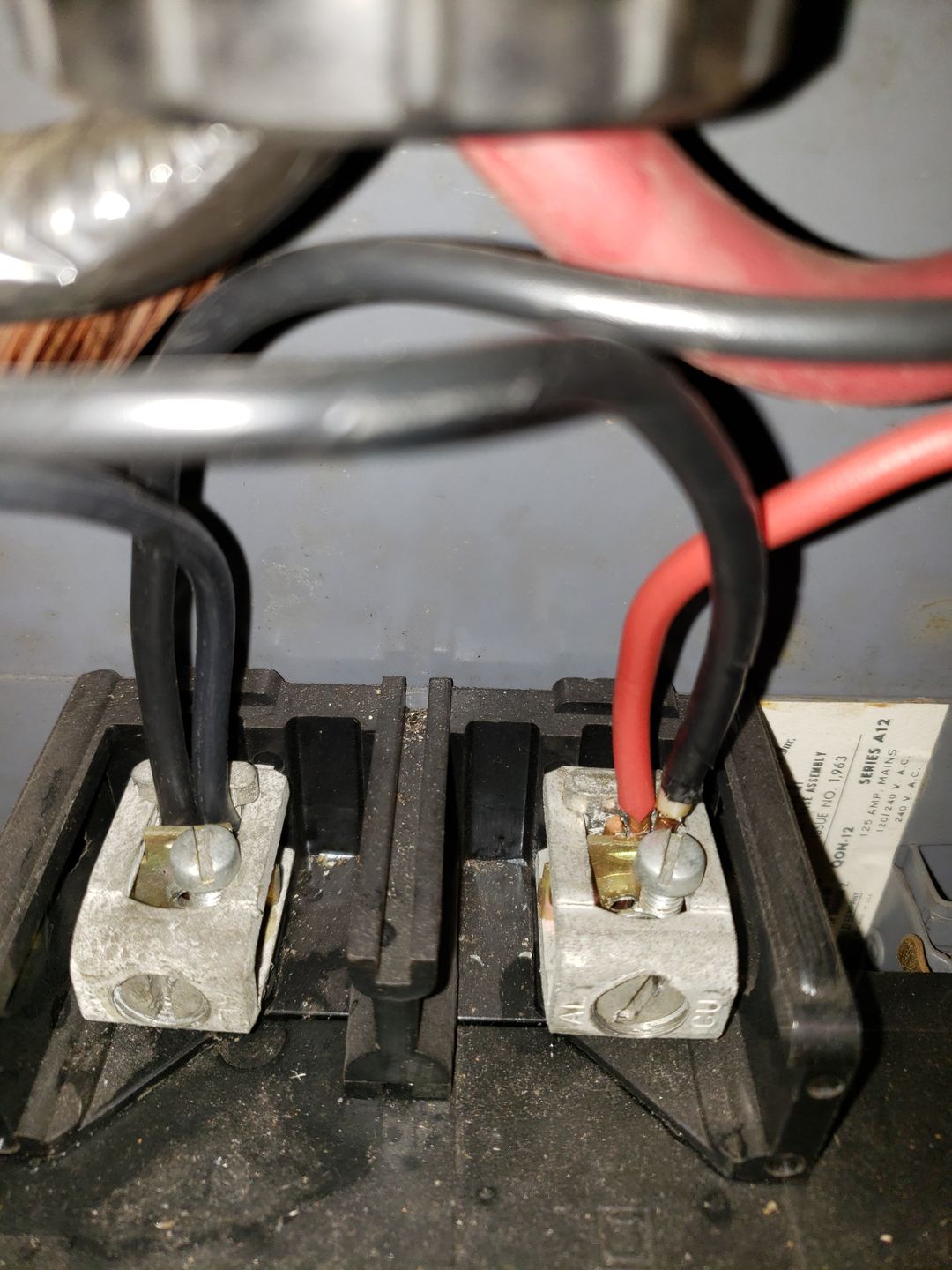 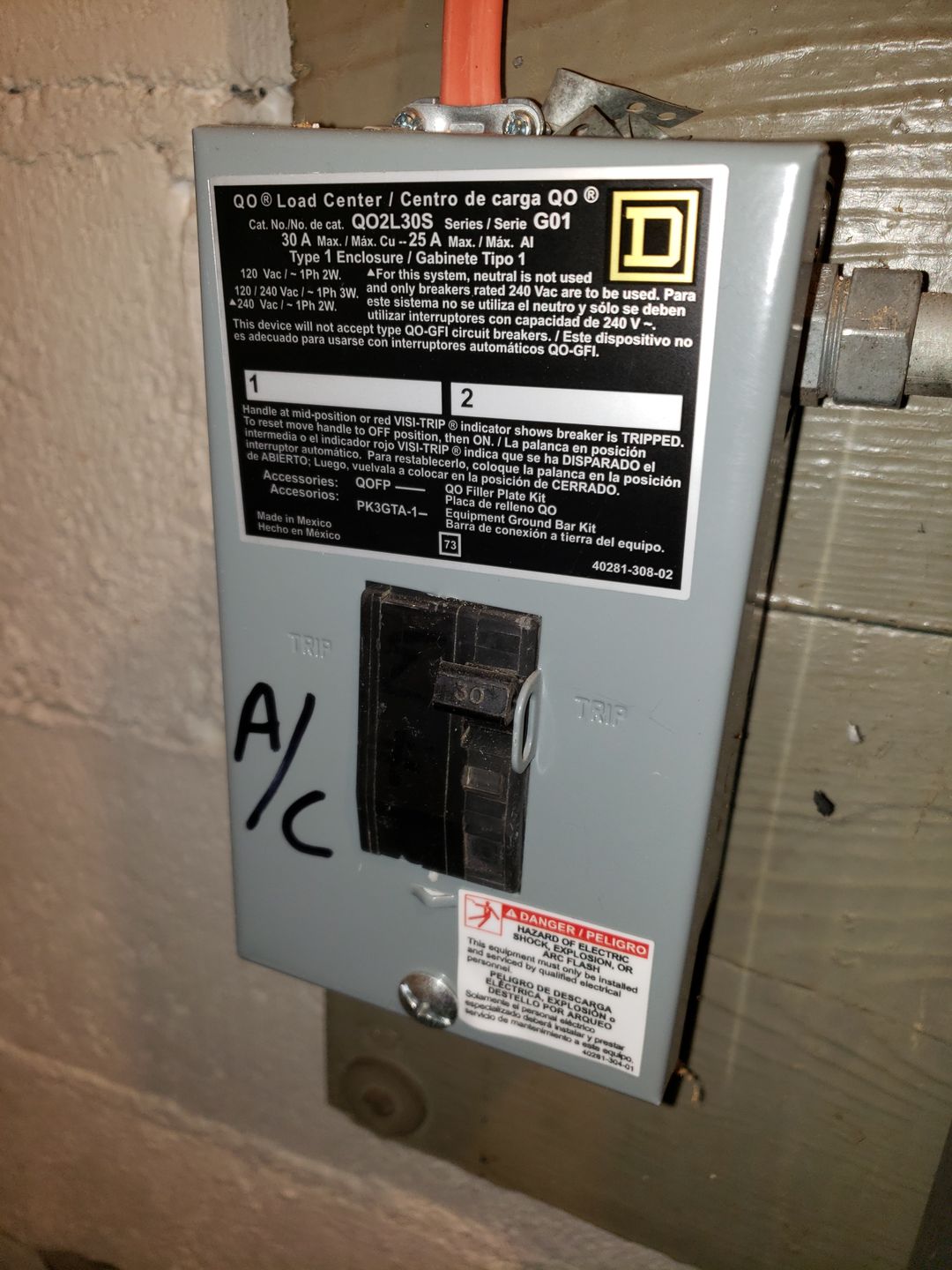 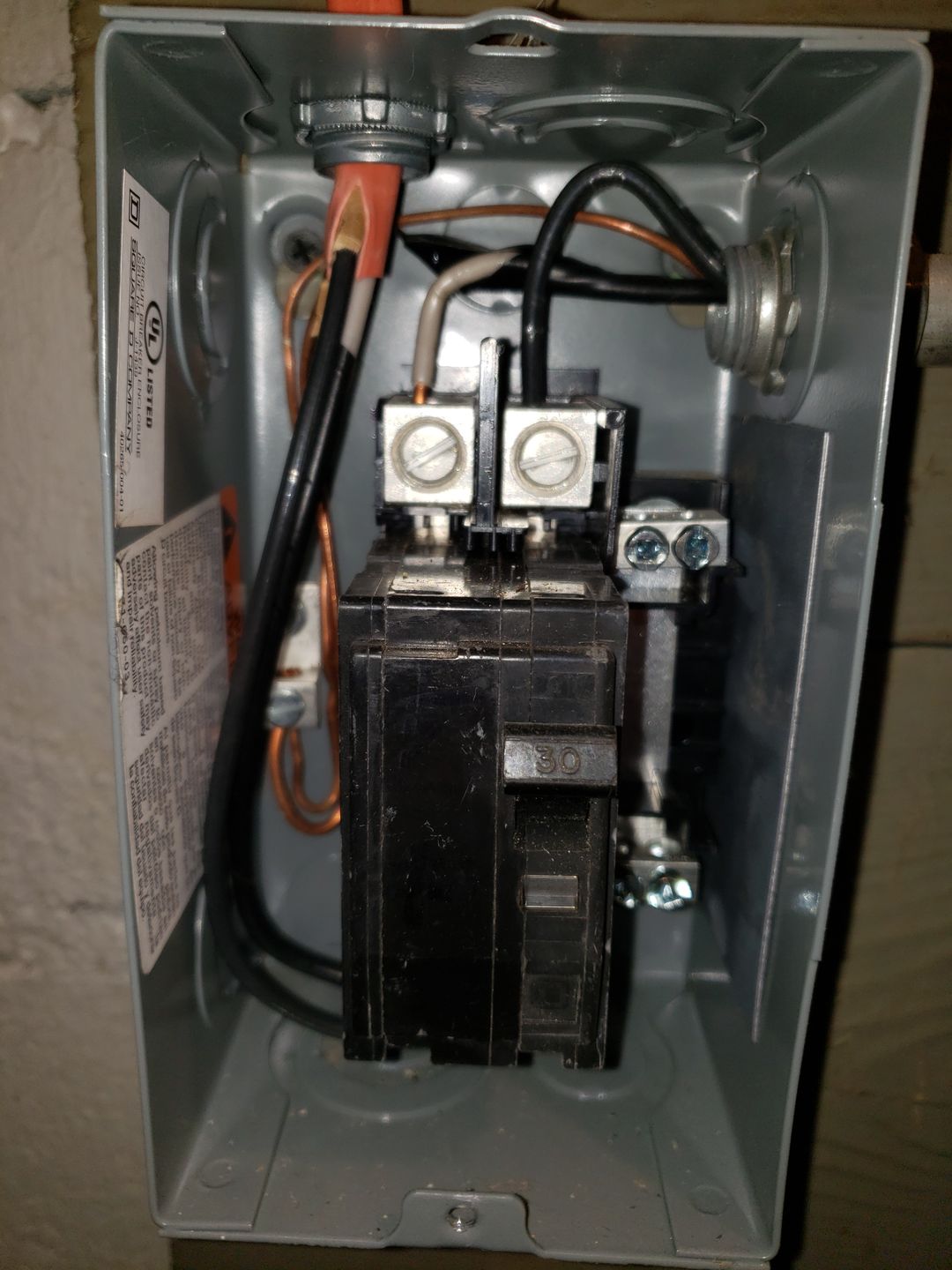 Edit: Finished, thanks for the help! 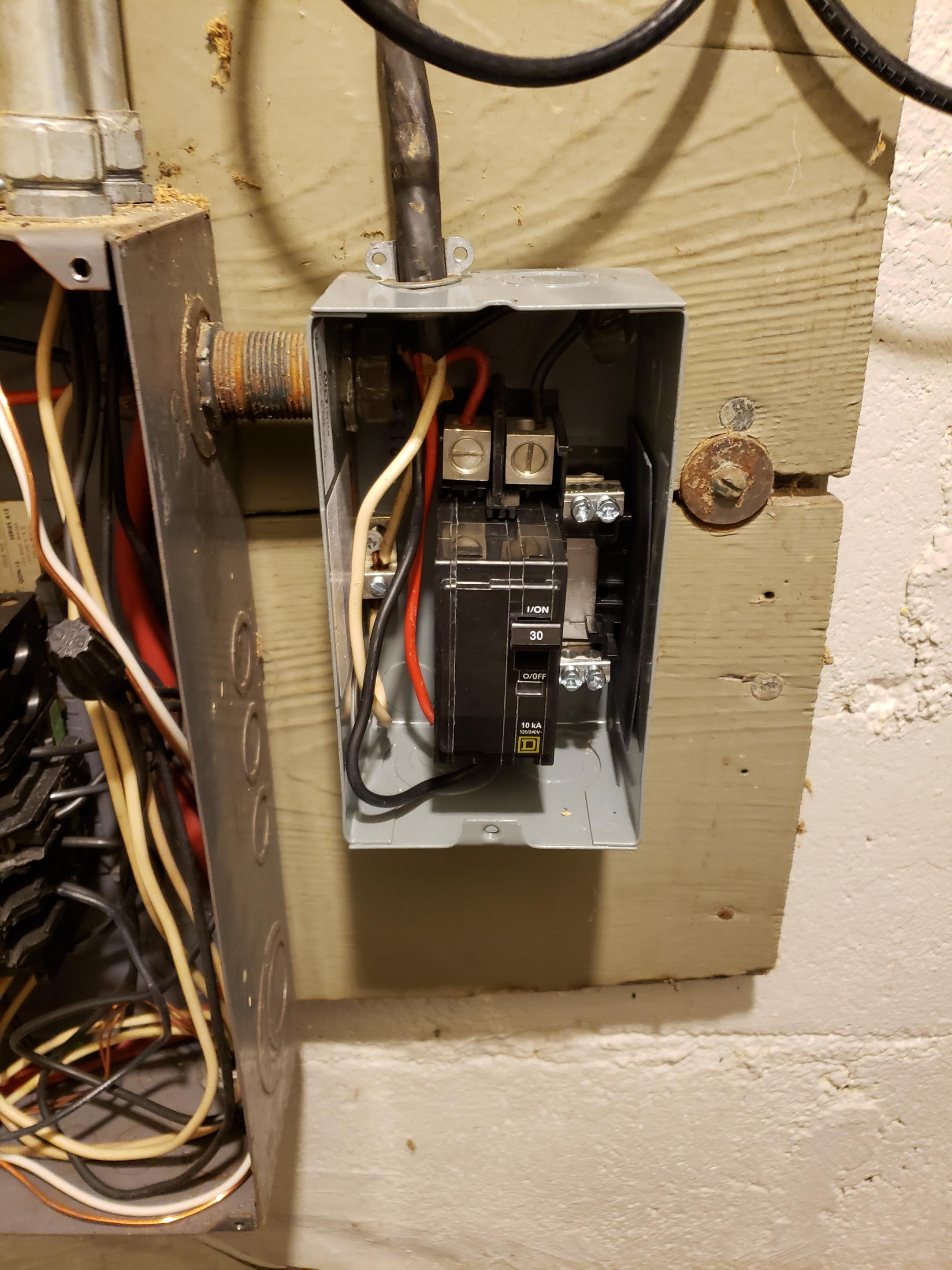 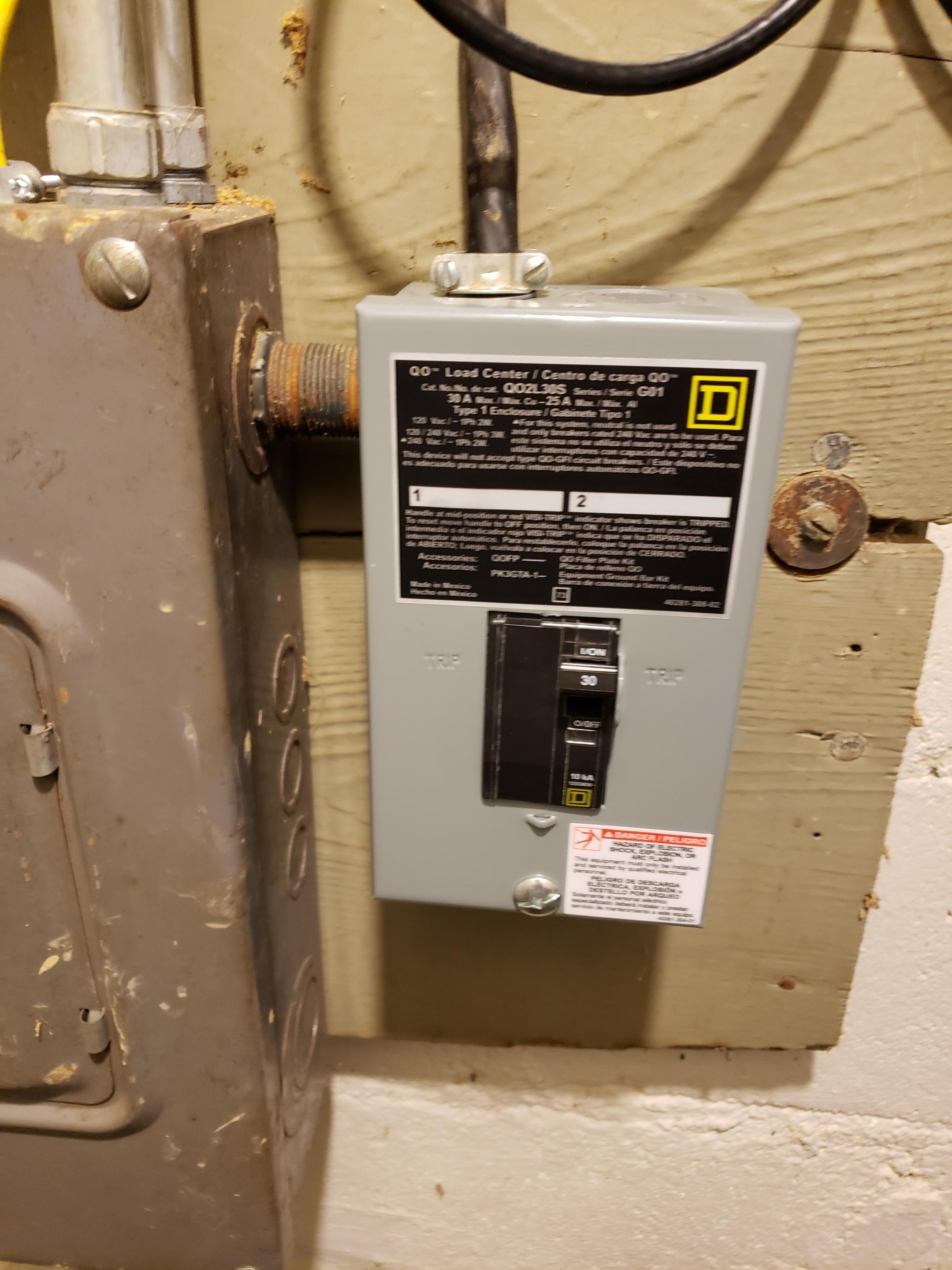 Well, I can see a few reasons why an electrician would say "I'm not touching it unless we make it a full-replacement job." Fully replacing that panel with one that's big enough to cover all the bases in the right way would be preferable, but there are smaller steps you can take that will correct the biggest problems while controlling the cost.

The primary problems I see are these:

So here's a meet-in-the-middle solution. Remove the dryer fuse box and hang a new breaker panel there. Choose one with plenty of spaces: we'll be using four spaces to accommodate the two-pole breakers needed for the dryer and the air conditioner. A 12-space panel should be the bare minimum; 16-20 spaces would be better. It doesn't matter whether the new panel has a main breaker or not, but if it does, choose one that's at least 100 A.

Mount the new panel with a few conduit nipples connecting between the existing and the new panel boxes. A single 1-1/2" will make installation of the subpanel feeder conductors easy; if you can also arrange an extra 1" near the bottom of the existing panel it may come in handy later.

Remove the dryer and air conditioner conductors from the bus lugs at the top of the main panel. Install new conductors there to feed the new subpanel. The bus lugs in the main panel are protected by the reverse-fed 100A breaker at top left so choose conductors that are rated for that. A couple feet of aluminum 1/0 gauge will do nicely.

OK, here's what I see going on: The main power is supplied via the breaker on the upper left in the breaker panel. That's a little unusual as normally there would be a main breaker on the top lugs. This almost looks like a retrofitted (or re-purposed) sub-panel.

You have 2 taps off the lugs on top (not code legal to have 2 wires under the same lug, BTW). On for your A/C and one for your Dryer. They are undersized for the overcurrent protection provided by the main breaker, but may be OK according to "tap" rules in the NEC. Fortunately you have a main breaker that can disconnect power to the taps so you won't have to pull the meter to drop power. Since the distance is so short, I'd just replace the wires between the Dryer switch and the main panel.

A question: What is the device on the upper right of the breaker panel? There doesn't seem to have anything connected to it.

If you want to do a direct replacement, that's up to you, but I'd go with a disconnect that includes a 30 amp breaker. There are lug assemblies that can make your A/C and Dryer connections code legal so you don't have to have 2 wires under one screw.

Lastly, one more minor point, the yellow Romex coming out of the top of the breaker panel is not protected, so it's not code compliant. ...just an FYI.

What it looks like to me is the fuse box is attached with conduit that’s your grounding path. There is black and red for your 240v and white neutral this electrically would meet code using the 10’ tap rule.

The tap rule allows the circuit to be tapped (yours is 2 under a screw? If there is a plate it is ok I am not sure) this is not usually code compliant but may be if the panel listing allows it some do. There lugs that can convert a single to a double and that would then be a code compliant install.

I would want to convert the fuse box to a 30 amp panel like your AC and wire it the same (I do not see a neutral to case bonding jumper that is good) so to make sure it is up to code that case ground needs to go to a 4 wire receptacle and this grounding wire can be run separately to the new receptacle. This addition of the grounding conductor has been allowed since 2017 code adoption.

So now what is the hard part? The top may be live all the time to work on this all the breakers would need to be turned off. (Then they won’t arc when removing the wires but it is still hot (unless there is an outside disconnect then use that to turn off the power.

Not the answer you're looking for? Browse other questions tagged circuit-breaker replacement or ask your own question.