Wire my house for Internet

As an IT student I have a first chance to plan a basic Internet topology in my own home. We have fiber-optic Internet and a telephone line to our home. We would like to ask for advice about changing the topology of the Internet inside our home.

This is the current state of the network in our two-level house: 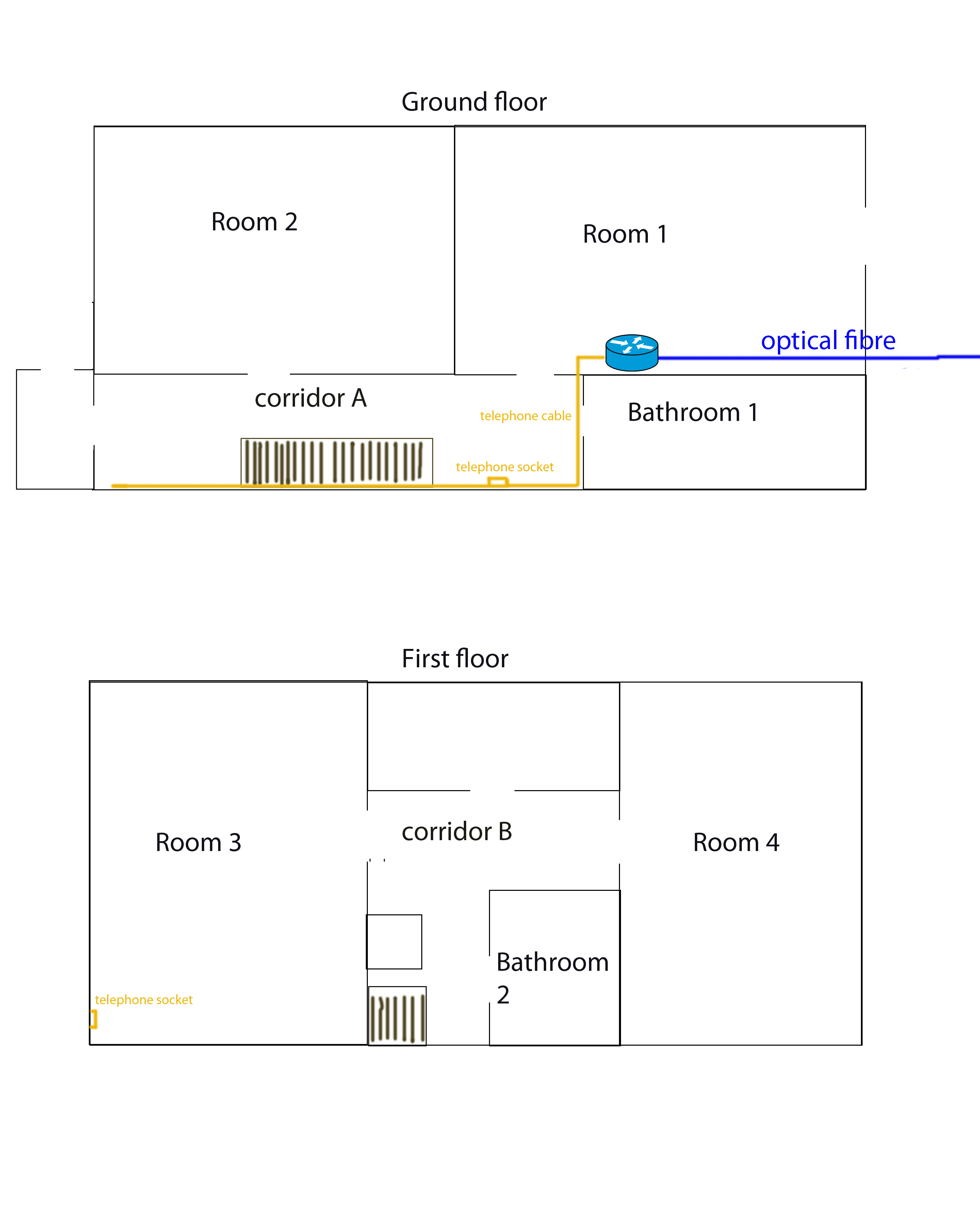 We are currently renovating the floor, in rooms: Room1, Room2, Corridor A. We want to distribute an Ethernet cable under the floor so that Ethernet sockets are available in individual rooms. Additionally, one telephone socket would be needed to connect our telephone. The picture Desired state shows the desired locations of telephone and telephone sockets in red and yellow. 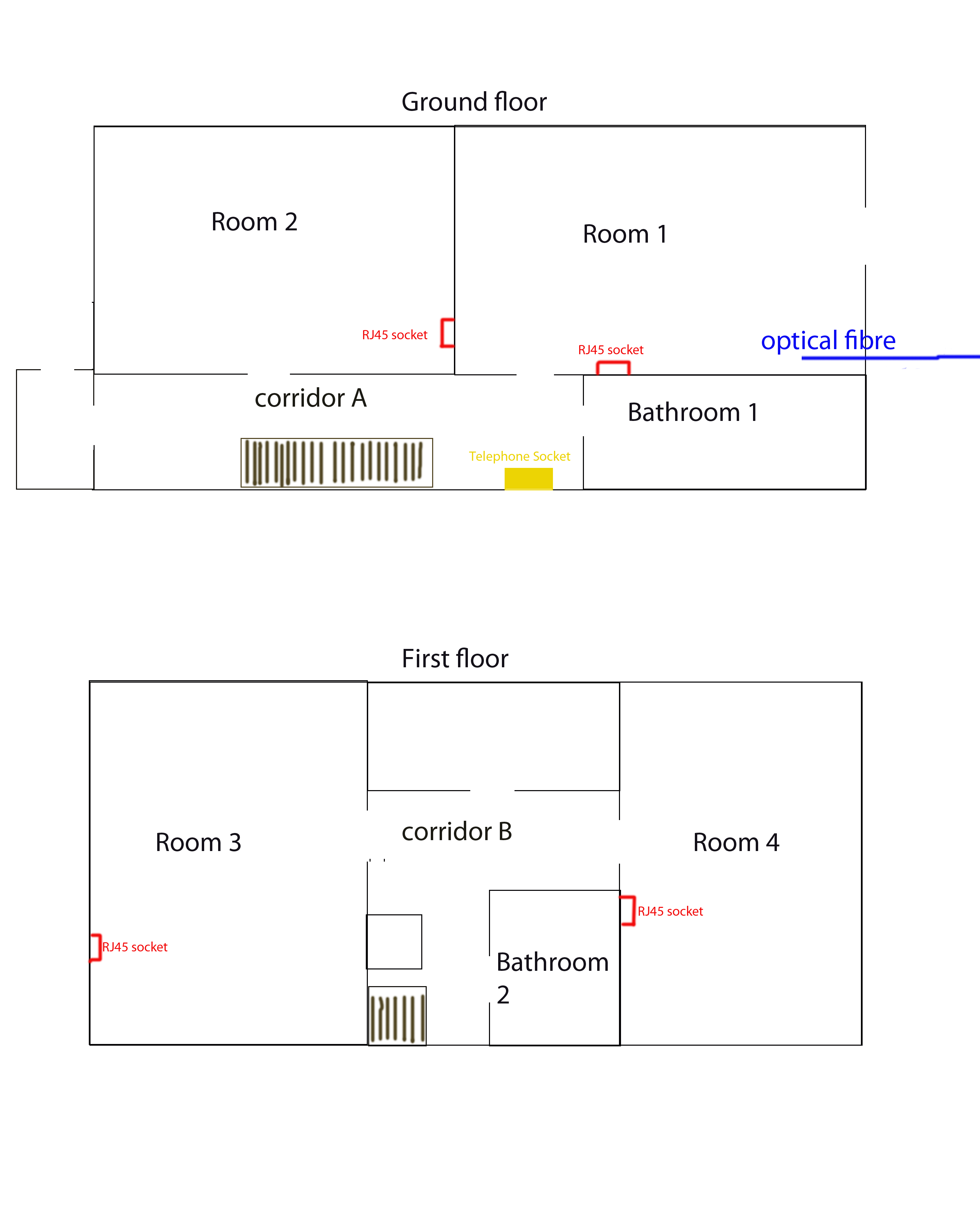 Could somebody please propose a topology that will work?

Additionally, I have questions about desired state:

A few different pieces here. No one "right" answer, but I'll make some recommendations:

Ethernet uses a star topology, so you need a switch.

Most router/modems from internet providers provide something like a 4-port switch. Many of them are garbage (ie, not gigabit, or gigabit but slow) and they stop working when the modem has a bad day.

So basically, you need a switch. There are some good cheap ones that don't use much power. Since it will be on permanently, considering its power use is important for your electricity bill. Some switches shut down unused ports to save power.

Next, you need a NAS. It should be low-power, with gigabit ethernet and RAID. It can be a linux PC or a stand-alone NAS box, although many of these boxes are slow. It must be placed in a location where it won't be stolen. Not in the basement if you live in a flood-prone area. If you don't have a NAS, then you're probably not doing backups, which means you have no data. It should be backed up manually to a SSD stored in the garden shed, and automatically to cloud storage.

Likewise, if you do some development you may end up with two computers in your home office. It's nice to pull another cable, and not have yet another switch sitting there burning power. And then you get a printer that needs ethernet... you get the idea.

WiFi from ISP routers tend to suck. The most annoying feature is that it turns off when the router has a bad day or loses connection to the ISP. So if you use WiFi a lot for laptops, consider hanging a Netgear on the wall somewhere. That also needs Ethernet.

What devices would be needed besides a router so that the network layout would be wise?

Waste of money, just pull the cables through the conduits and crimp jacks on the ends wherever the switch is.

That's only useful if you want to switch some of the RJ45 sockets between phone and LAN, but everyone has cellphones now, so why do that?

Which categories of ethernet cable would make sense?

The cheapest you can get that will run gigabit, ie Cat5e or better. The cheapest will usually be the one that's being produced in highest quantity, so it is possible you find Cat6 cheaper than Cat5e.

Now, conduit is cheap, so make sure you run some extra. Who knows, you might get some solar panels (the inverter needs ethernet) or IP cameras for security, or...

You want a star topology for Inet, Every jack should be a home run to the switch or router. You should get a low voltage panel (like an electrical panel) to house the gear you need. Since you are only installing 4 RJ45 jacks, a simple router would do connected to the modem. You may not need the router because some modems have up to 4 jacks, still, preparing for the future, you still might want to go with an 8 jack router. Just make sure when configuring that you choose whether the modem or the router does DHCP assignment. If you want WIFI as well, get a router with WIFI capability. Some modems (like Comcast) also already have WIFI built in. You'll need to review the specs of each device to see what you'll need.

Answering your other questions, get the fastest cable you can afford, but IMHO, Cat 6 would be fine for a very long time. That's assuming you want to actually install physical cable. That can be a lot of work in an existing home, depending upon accessibility to crawl spaces, attics, walls, etc. You may want actual cable, but have you thought about all WIFI? It's pretty good these days. There are also WIFI repeaters to extend the range.

I can tell by your spelling that you are not in the US (fibre, sockets, etc). UK?

Anyway if, like many houses in the UK, are brick, WIFI isn't all that good. Hope this helps.

The most common topology for homes and small offices is Star, specifically Extended Star. With the number of jacks you're looking for, if your router has 4 internal ports you could do a single Star, but without room to upgrade later (would need to reconfigure a bit).

Fiber needs a modem - modem+routers in a single unit are common these days, but if you have a separate modem you can place that wherever you like between the fiber termination and the router. Routers commonly have wifi access points built-in and with your 2-story house, a wifi router centrally located on your ground floor should serve the entire house well. Keep the router away from electrical lines and metal vents if possible, and mount it on the wall/ceiling or high on a shelf if you can. I'm guessing your telephone service will split off your modem, so that may impact placement.

Also, I see that your desired network jack placement in Room 3 is near the same place as the "current state" but it would probably be easier to place if it were on the opposite wall, if that's possible. That would put it on the same wall as the jack in Room 2 below it, and I notice the jacks in Room 4 and Room 1 are fairly well vertically aligned too. This should make it slightly easier to run cables vertically inside walls instead of having to go through ceilings/along walls/etc. If you have an easy way to run cables like existing conduit, unfinished walls/ceilings, you can run wherever you like.

For the questions I haven't addressed: 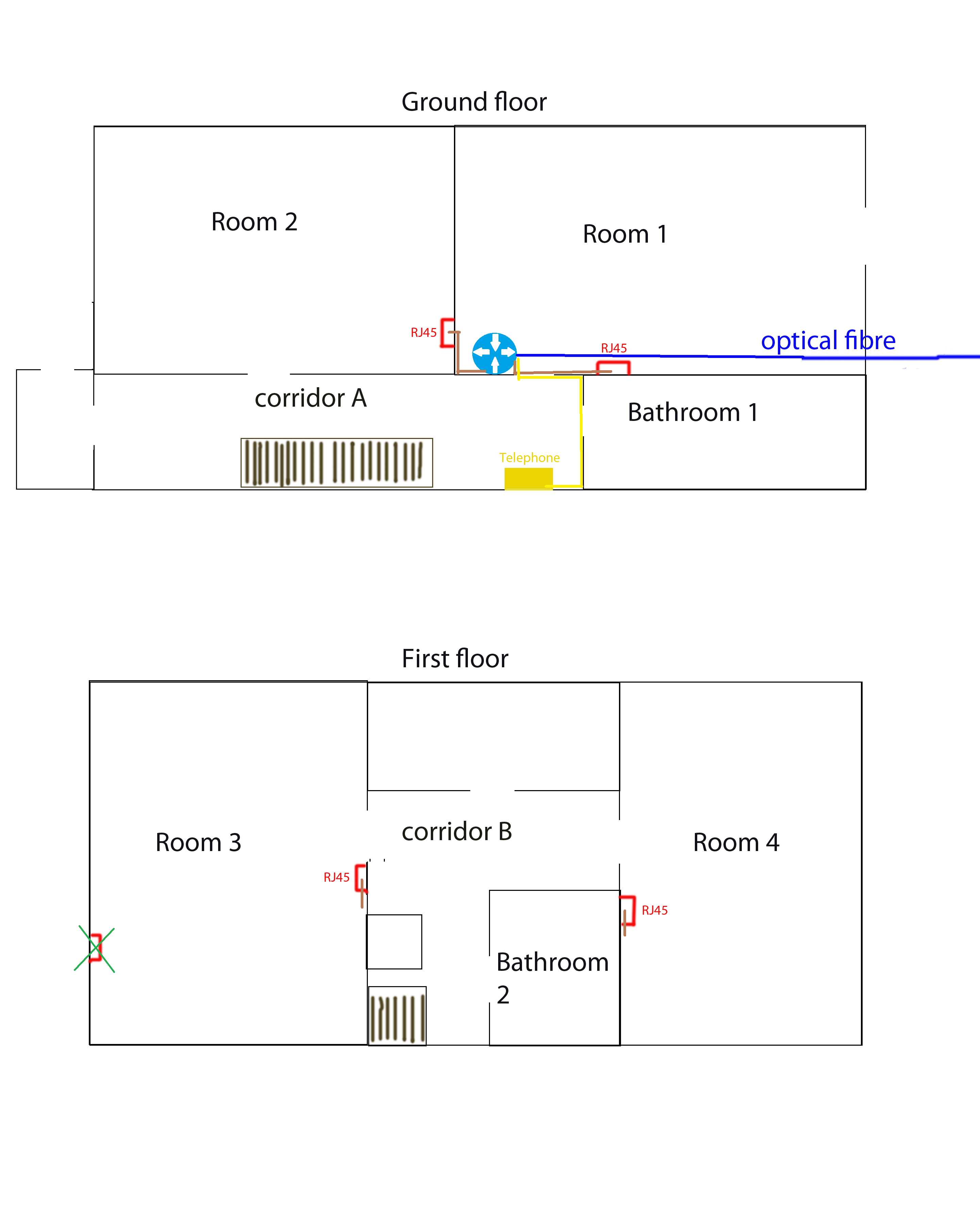 When I did mine about 15 years ago I ran CAT 5 (hard to get at the time) I put at least a outlet setup (has at a minimum 2 cat 5 cables, 2 RG6 cables and another for the cable TV on each wall in the room. Yes they are even in the bathroom and come in handy with the phones BC (Before Cell Phones). I started with a 96 jack patch panel which has grown a bit over time. I ran the phones, internet, and a few other things through the cat 5. The RG6 was for video. I started with a rented modem and router from the cable company and use a 4 channel hub. It worked great. I used care during the install and the system checks at a gigabit today. I have a full basement so things were relative easy to do. It appears about every year or so I updated the hardware. Everything is setup as Gigabit today and works very well.

My advice is to design the best system you can possibly foresee then when in doubt add it. Just because you have the wire etc installed you do not have to connect it or use it. POTS (Plain Old Telephone System) works great over ethernet cable, you either get an adaptor or as I did I used a RG45 plug on the end of the phone cord set. Regardless it will eventually become obsolete so be sure you can get at the cables etc if you need to upgrade in the future to ???.

Not the answer you're looking for? Browse other questions tagged electrical cables internet cable-management or ask your own question.

4
Is my plan for wiring ethernet reasonable?
21
How do I feed an ethernet cable through a doorway without damaging the door or wall?
2
Fix/Move Ethernet on Side of House
4
Connect Network Expansion Board/Patch Panel to Router
2
Can I repurpose this RJ45 setup for phone to run as Ethernet?
1
Run a Tunnel on existing Comcast cable?
2
Connecting detached shop to home network via fiber
1
Is it possible to install a LAN-socket into this empty one?