Why would a particular heat pump model be illegal in my state?

I am trying to replace an electricity-hungry whole-house electric furnace with something that will be more cost-effective. I live in a high-altitude part of New Mexico, where I don't need to use much A/C, but need a more efficient heater for the winters.

While looking at brochures of the most efficient heat pumps, I found a slightly older model of the product I'm considering purchasing had a new Energy Star "Energyguide" label. The label was added to the product page only 15 days ago.

The label has a long list of states "Federal law prohibits installation of this unit in other states." California, Nevada, Arizona, and New Mexico are banned states. See the energy guide. 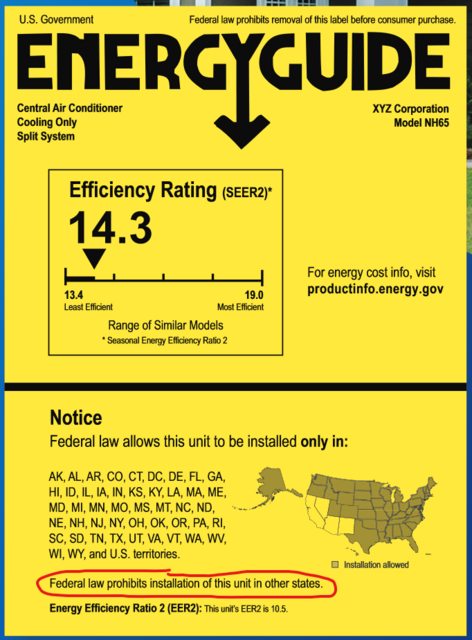 Why would a highly energy efficient heat pump be illegal in this region? Is that a suggestion that this product is not going to be energy efficient in my climate? Should I be able to infer that the newer models will be banned soon too, Energy Star just takes time to create the Energyguides?

I live in a high-altitude part of New Mexico, where I don't need to use much A/C, but need a more efficient heater for the winters.

Then you're looking at the wrong figure.

The number you're evaluating on is SEER, which is only relevant when the unit is in air conditioning mode. It says nothing about its heat performance.

For heating, the "dumbed down" number is HSPF, but what you really need is a table of COP @temperature. Because you need to make sure your heat pump will actually heat at your worst scenario temperatures.

COP is Coefficient of Performance, or the ratio of "watts of heat created per watt of electricity consumed". Your resistive electric heat has a COP of 1.00 by definition.

With a heat pump it will vary by source temperature. If you beat COP 2.5, it is actually more carbon efficient to burn natural gas in a power plant and run your heat pump, than it would be to burn gas in a 100% efficient on-site furnace. Transmission losses and all.

A lot of the older heat pump designs will simply cut out at 10-20F and send you to using emergency heat (electric resistive heating which is what you already have). Why would I think you should worry about that?

Why would a highly energy efficient heat pump be illegal in this region?

I'm sure one wouldn't be. On the other hand, your unit barely meets the absolute bare minimum floor standards in 46 states.

Look at the sticker. There's a scale of "least to most efficient" and it shows where your unit lands. If you didn't know, that's the bad end of the scale. 13.4 being the worst units going to northern states, and 19 being - well, the scale is handicapped. Many units are available with SEER2 well into the 30's. But that would make domestic manufacturers look bad.

But again SEER buys you nothing, you need COP or HSPF.

I went shopping for A/C units in 2021 in rural country. Everyone wanted to sell me el-cheapo 13 SEER air conditioning units. Why are they all 13 SEER? Because that was the absolute bottom shelf least efficient unit that could possibly be sold in the northern states. And even those manufacturers had to be dragged kicking and screaming up from 10 SEER, the standard in the 90s.

Meanwhile in Asia.... A/C in the 30s of SEER are common, and they're all reversible heat pumps, coz that's how they roll over there. And they work fantastically - see this video about analysis of their use in Chicago winters, for Pete's sake.

The US industry does not want to make efficient units, because that would cost a tiny bit more at scale.

So more likely than not, you are looking at a tuned-up 1970s heat pump design that was shimmed just enough to be legal in 46 states. *The problem for you is that moldy old tech is laughably terrible at low temperature heat-mode operation...

... which is Your Entire Point Of Buying It.

And again you are after COP @ temperature, not SEER. Heating is a different job than cooling and requires different optimization.

Should I be able to infer that the newer models will be banned soon too, Energy Star just takes time to create the Energyguides?

Yes, units which are deliberately built to barely comply today will not comply in the future. That should be obvious.

The EER2 rating of the unit listed is 10.5; I am unsure of how this converts to an EER rating, but it seems plausible that it does not meet the standard. (Also note that these standards will be tightened at the start of 2023.)

As to the difference between the ratings, the SEER is a weighted average of the efficiency of the unit running at different capacities (25%, 50%, 75%, and 100%) while the EER is just the efficiency when running at full blast. A particular unit might be highly efficient when running at 50% capacity but much less efficient at 100%, which would lead to its SEER rating being significantly higher than its EER.

For places in the desert Southwest, it seems likely that the unit will be running full blast more of the time, and I suspect this is why units installed there must satisfy an EER standard as well as a SEER standard. (Of course, this doesn't seem like it should apply to you since your climate is different from that lower-elevation places in the same state; but that's bureaucracy for you.)

The chart indicates that the heatpump could do much better. It's at 14.3 while the chart goes from 14 to 19. This suggests that there are more efficient heatpumps that you can acquire.

Doing a random search got me a rating of 18 for a heatpump.

Those states have decided that the minimum rating for a new install must be higher than shown in the example.

I think this statement from a Carrier product page might hold the answer:

This model may not be eligible for installation in the Southwest region of the country, based on Department of Energy minimum efficiency standards in place as of January 1, 2015. Ask your Carrier® expert to ensure your new air conditioner meets government regulations for your area.

Not the answer you're looking for? Browse other questions tagged energy-efficiency heat-pump usa or ask your own question.

2
Will emergency heat hurt my heat pump during defrosting?
1
Is HVAC device a heat pump?
1
Heat Strip in Heat Pump
1
Upgrading a heat pump to a larger heat strip
3
Heat pump Not turning off
0
Can you install window AC/heat pump on floor to be used as heat pump?
2
If I live in the US Southwest, would a heat pump or conventional dryer use less energy?
0
Using water cooler for CNC laser as residential heat pump