Any code issues with putting an electrical box right next to wire on opposite stud?

Thinking of expanding a 2-gang box to a 3-gang box in a bedroom (light switches next to the door). I'm measuring about 6.25" between the studs. I want to use the following box, which is listed as having a width of 6.02". 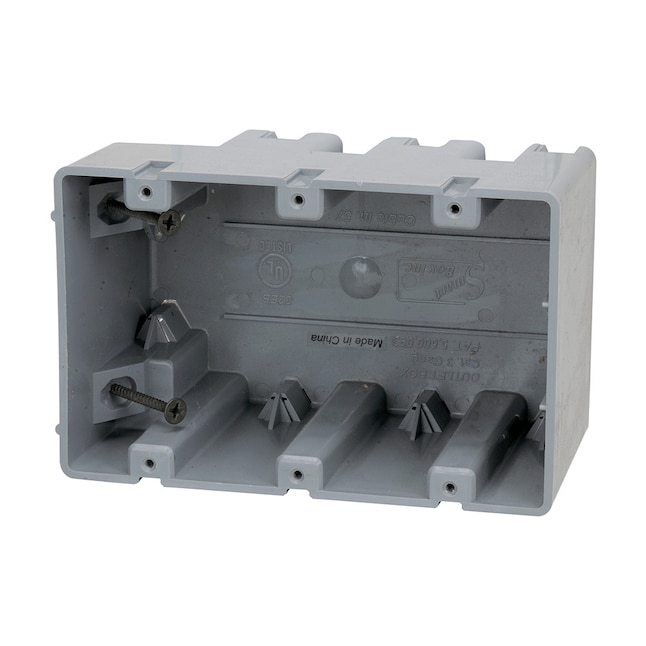 It would be attached to the right stud. The left stud has a wire running down it, 12-2 Romex, that is taut and stapled to the stud. Seemingly, based on the measurements, there would be enough room for the box to fit in this space, even with the wire, and it wouldn't be squeezing the wire. Is there a reason this wouldn't be allowed provided the wire is not getting compressed?

No problem with the cable running close to the box. It could even be up against it. It wouldn't be more compressed than the grips that will hold it in the box. Just make sure you're very careful cutting the drywall out to make it a three gang hole. I've seen people get all excited because the box will fit and their plan will work and then they nick or cut the NB cable while cutting the piece of drywall out. Now they've got a splice to worry about.

That's a great junction box. I've used them a lot and they are so much better than the old work boxes.

1
What is this single pole switch to empty ceiling box blows breaker when switched on
2
What are the specific and current code requirements for wiring two circuits to one duplex receptacle?
1
Can I run two 6/3 NM cables up the same 2x4?
0
Are there any safety issues with this breaker box?
2
Replacing older Leviton dimmer with new Lutron different wiring
2
How can I rewire to remove/relocate this hidden junction box?
12
What is this electrical box next to the switchboard?
3
How to relocate a GFCI receptace from a wall to a basin cabinet side?